Johann Joachim Quantz (German: [kvants] ; 30 January 1697 – 12 July 1773) was a German flutist, flute maker and Baroque music composer. He composed hundreds of flute sonatas and concertos, and wrote On Playing the Flute, a treatise on flute performance. His works were known and appreciated by Bach and Mozart.

Quantz was born as Hanß Jochim Quantz [1] in Oberscheden, near Göttingen, in the Electorate of Hanover. His father, Andreas Quantz, was a blacksmith who died when Hans was not yet 11; on his deathbed, he begged his son to follow in his footsteps.[ citation needed ] Nevertheless, from 1708 to 1713 he began his musical studies as a child with his uncle Justus Quantz, a town musician in Merseburg; he also studied for a time with a cousin's husband, the organist Johann Friedrich Kiesewetter. From 1714 on, Quantz studied composition extensively and pored over scores of the masters to adopt their style. [2]

In 1716 he joined the town band in Dresden, where in 1717 he studied counterpoint with Jan Dismas Zelenka. In March 1718 he was appointed oboist in the newly formed Dresden Polish Chapel of August II, Elector of Saxony and King of Poland. As it became clear that he couldn't advance as an oboist in the Polish Chapel, Quantz decided to pursue the flute, studying briefly in 1719 with Pierre-Gabriel Buffardin, principal flute in the Royal Orchestra. He became good friends with Johann Georg Pisendel, concertmaster of the Royal Orchestra, who greatly influenced his style. [2]

Between 1724 and 1727 Quantz completed his education by doing a "Grand Tour" of Europe as a flutist. He studied counterpoint with Francesco Gasparini in Rome, met Alessandro Scarlatti in Naples, befriended the flutist Michel Blavet in Paris, and in London was encouraged by Handel to remain there. In 1728 Quantz accompanied August II on a state visit to Berlin. The Queen of Prussia was impressed and wanted to hire him. Though August II refused, he allowed Quantz to travel to Berlin as often as he was asked to. That year the Crown Prince, Frederick II of Prussia (Frederick the Great), decided to study the flute and Quantz became his teacher for several visits a year. Quantz later told writer Friedrich Nicolai that he once had to hide in a closet during an outburst of Frederick's domineering father, who disapproved of his son's musical studies. Until 1741 Quantz remained at the Saxon Court in Dresden. He married Anna Rosina Carolina Schindler in 1737; the marriage was not happy, and it was generally known in Berlin that Quantz's wife tyrannized him.

When Frederick II became King of Prussia in 1740, Quantz finally accepted a position as flute teacher, flute maker and composer at the court in Berlin. He joined that court in December 1741 and stayed there for the rest of his career. [2] He made flutes from at least 1739 and was an innovator in flute design, adding a second key (Eb, in addition to the standard D#) to help with intonation, for example.

As well as writing hundreds of sonatas and concertos, mainly for the flute, he is known today as the author of Versuch einer Anweisung die Flöte traversiere zu spielen (1752) (titled On Playing the Flute in English), a treatise on traverso flute playing. It is a valuable source of reference regarding performance practice and flute technique in the 18th century.

Quantz remained at Frederick's court at Potsdam until his death in 1773. A biography appeared in 1755 in Friedrich Wilhelm Marpurg's Historisch-kritischen Beyträgen zur Aufnahme der Musik; another, in Italian, followed in 1762. His grandnephew, Albert Quantz, published a full-length biography in 1877.

Few of Quantz's works were published during his lifetime. Most of them are for transverse flute, including more than 200 sonatas, around 300 concertos, including several for two flutes; around 45 trio sonatas (mostly for 2 flutes or flute and violin, with continuo); 6 quartets for flute, violin, viola and continuo; various flute duets and flute trios; and unaccompanied caprices and fantasias for flute.

The thematic catalog for Quantz's works was published by Horst Augsbach. [3] 'QV' stands for 'Quantz Verzeichnis', and 'Anh.' for 'Anhang' ("supplement") when the authenticity of the works is in doubt. A number of additional works have been discovered or come to light since its publication. 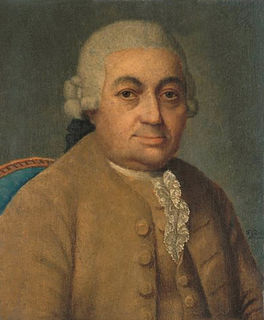 The trio sonata is a genre, typically consisting of several movements with two melody instruments and continuo. Originating in the early seventeenth-century, the trio sonata was a favorite chamber ensemble combination in the Baroque era.

Jacques de Vaucanson was a French inventor and artist who was responsible for the creation of impressive and innovative automata. He also was the first person to design an automatic loom and built the first all-metal lathe.

This is a list of notable events in music that took place in the year 1732. 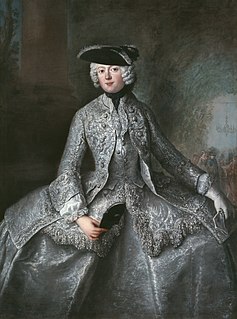 Princess Anna Amalia of Prussia was Princess-Abbess of Quedlinburg. She was one of ten surviving children of King Frederick William I of Prussia and Sophia Dorothea of Hanover.

Michel Blavet was a French composer and flute virtuoso. Although Blavet taught himself to play almost every instrument, he specialized in the bassoon and the flute which he held to the left, the opposite of how most flutists hold theirs today.

Pierre-Gabriel Buffardin was a French flutist and composer of the late Baroque period. He was a son of Jean-Joseph Buffardin, an instrument maker.

The Sonata in E major for flute and basso continuo is a sonata for transverse flute and figured bass composed by Bach in the 1740s. It was written as the result of a visit in 1741 to the court of Frederick the Great in Potsdam, where Bach's son Carl Philipp Emanuel had been appointed principal harpsichordist to the king the previous year. It was dedicated to Michael Gabriel Fredersdorf, the king's valet and private secretary, who, like the king, was an amateur flautist.

Johann Christian Schickhardt was a German composer and woodwind player.

The Paris quartets is a collective designation for two sets of Chamber music compositions, each consisting of six works for flute, violin, viola da gamba, and continuo, by Georg Philipp Telemann, first published in 1730 and 1738, respectively. Telemann called his two collections Quadri and Nouveaux Quatuors. The collective designation "Paris quartets" was only first bestowed upon them in the second half of the twentieth century by the editors of the Telemann Musikalische Werke, because of their association with Telemann's celebrity visit to Paris in 1737–38. They bear the numbers 43:D1, 43:D3, 43:e1, 43:e4, 43:G1, 43:G4, 43:g1, 43:A1, 43:A3, 43:a2, 43:h1, 43:h2 in the TWV.

Johann Pfeiffer was a German violinist, concert master and composer of the late baroque period.

Johann Christian Jacobi was a German oboist and composer of the Baroque period.

The Concerto, BWV 525a, is a trio sonata in C major for violin, cello and basso continuo, based on material otherwise found in Johann Sebastian Bach's first Organ Sonata, BWV 525, and Flute Sonata in A major, BWV 1032. The oldest extant manuscript containing the BWV 525a arrangement, D-B Mus.ms. Bach St 345, is dated to the middle of the 18th century. Although this version of Bach's sonata movements may have originated during his lifetime in the circle around him, it seems unlikely that the composer supervised, or even ordered, the manufacture of the string trio adaptation, thus the arrangement has been listed in BWV Anh. II, that is the Anhang (Anh.) of doubtful works, in the 1998 edition of the Bach-Werke-Verzeichnis (BWV). Breitkopf & Härtel published BWV 525a in 1965. Digital facsimiles of 18th- and 19th-century manuscript copies of the arrangement, in which the sonata is titled "Concerto", became available in the 21st century. 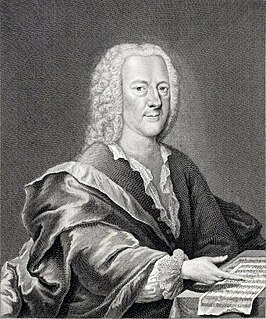 Tafelmusik is a collection of instrumental compositions by Georg Philipp Telemann (1681–1767), published in 1733. The original title is Musique de table. The work is one of Telemann's most widely known compositions; it is the climax and at the same time one of the last examples of courtly table music.

Rachel Brown is a British flautist and author, known especially for her work with Baroque music and flutes. She is currently professor of baroque flute at the Royal College of Music in London, in addition to traveling around the world to give masterclasses. She has performed with many orchestras internationally, including as principal flute with Kent Opera, the Academy of Ancient Music, the Hanover Band, the King's Consort, Collegium Musicum 90, Ex Cathedra, and the Brandenburg Consort. She is known for her extensive work and mastery of both historical and modern flutes.