Dietrich Bonhoeffer was a German pastor, theologian, anti-Nazi dissident, and key founding member of the Confessing Church. His writings on Christianity's role in the secular world have become widely influential, and his book The Cost of Discipleship has been described as a modern classic.

Marie Magdalene "Marlene" Dietrich was a German-American actress. Throughout her long career, which spanned from the 1910s to the 1980s, she continually reinvented herself.

This article presents lists of the literary events and publications in 1549.

The Bishopric of Dorpat was a medieval prince-bishopric, i;e; both a diocese of the Roman Catholic Church and a temporal principality ruled by the bishop of the diocese. It existed from 1224 to 1558, generally encompassing what are now Tartu County, Põlva County, Võru County, and Jõgeva County in Estonia. The prince-bishopric was a sovereign member of the Holy Roman Empire and part of the Livonian Confederation.

The F-A-E Sonata, a four-movement work for violin and piano, is a collaborative musical work by three composers: Robert Schumann, the young Johannes Brahms, and Schumann's pupil Albert Dietrich. It was composed in Düsseldorf in October 1853.

Albert Hermann Dietrich, was a German composer and conductor, remembered less for his own achievements than for his friendship with Johannes Brahms.

Johannes Brahms's Wiegenlied, frequently referred to in English as Brahms's Lullaby or Cradle Song, is the composer's Op. 49, No. 4, originally written for voice and piano, published in 1868.

Susi-Lisa Erdmann is an East German-German luger and bobsledder who competed from 1977 to 1998 in luge, then since 1999 in bobsleigh. Competing in five Winter Olympics, she won two medals in the women's singles luge event with a silver in 1994 and a bronze in 1992, and a bronze at the inaugural two-women bobsleigh event in 2002. She is one of only two people to ever win a medal in both bobsleigh and luge at the Winter Olympics; Italy's Gerda Weissensteiner is the other.

Ludwig von Lahnstein is a fictional character of the German soap opera Verbotene Liebe . The character is played by actor Krystian Martinek. He appeared from 22 December 2009 to the character's death on 23 April 2013. 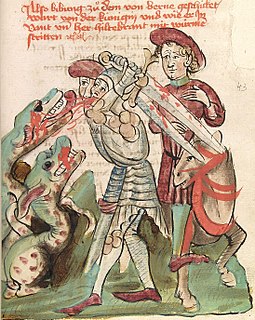 In legends about Theoderic the Great that spread after his death, the Gothic king Theoderic became known as Dietrich von Bern, a king ruling from Verona (Bern) who was forced into exile with the Huns. The differences between the known life of Theoderic and the picture of Dietrich in the surviving legends are usually attributed to a long-standing oral tradition that continued into the sixteenth century. The majority of legendary material about Dietrich/Theoderic comes from high and late medieval Germany and is composed in Middle High German or Early New High German. Another important source for legends about Dietrich is the Old Norse Thidrekssaga, which was written using German sources. In addition to the legends detailing events that may reflect the historical Theoderic's life in some fashion, many of the legends tell of Dietrich's battles against dwarfs, dragons, giants, and other mythical beings, as well as other heroes such as Siegfried. Dietrich also appears as a supporting character in other heroic poems such as the Nibelungenlied, and is frequently referenced and alluded to throughout medieval German literature.

Keilalphabetische Texte aus Ugarit or KTU is the standard source reference collection for the cuneiform texts from Ugarit.

Table Talk is a collection of Martin Luther's sayings around the dinner table at Lutherhaus, Luther's home, but also at other times and locations, such as walks in the garden or notes taken while on journeys. It is based on notes taken by various students of Luther between 1531 and 1544. It was compiled by Johannes Mathesius, J. Aurifaber, V. Dietrich, Ernst Kroker, and several others, and published at Eisleben in 1566.

Hello, My Name is Cox is a 1955 West German comedy crime film directed by Georg Jacoby and starring Johannes Heesters, Claude Borelli and Kurt Meisel. It is an adaptation of the novel Gestatten, mein Name ist Cox by Rolf and Alexandra Becker.

The Brahms-Preis has been awarded by the Brahms Society of Schleswig-Holstein since 1988. The prize is furnished with 10,000 euros. It rewards artists who have contributed mesmerizing work for the preservation of the artistic heritage of Johannes Brahms.

Ermenrichs Tod or Koninc Ermenrîkes Dôt is an anonymous Middle Low German heroic ballad from the middle of the sixteenth century.