For the 19th century chemist by the same name, see Johannes Thiele (chemist).

Karl Hermann Johannes Thiele (1 October 1860 – 5 August 1935) was a German zoologist specialized in malacology. Thiele was born in Goldap, East Prussia. [1] His Handbuch der systematischen Weichtierkunde (English edition published by the Smithsonian under the title Handbook of Systematic Malacology) is a standard work. From 1904 until his retirement in 1925 he was the curator of the malacological collection at the Museum für Naturkunde (Museum of Natural History) in Berlin. Thiele described more than 1.500 new species of molluscs; until today their types are deposited with the Museum of Natural History in Berlin. Especially important are his works on the Mollusca of the First German Antarctica Expedition and of the German Deep Sea Expedition aboard the vessel Valdivia. 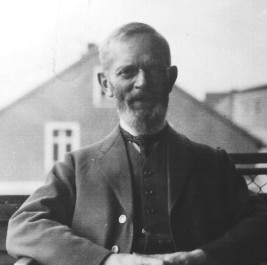 Johann Dietrich Alfken was a German entomologist who specialised in Hymenoptera especially Apoidea.

Heinrich Rudolf Simroth, was a German zoologist and malacologist. He was a professor of zoology in Leipzig.

Anisolabella is a genus of earwigs in the subfamily Anisolabidinae. It was cited by Srivastava in Part 2 of the book Fauna of India.

Stefan Clessin was a German malacologist.

Ancillina sumatrana is a species of sea snail, a marine gastropod mollusk in the family Olividae, the olives.

Trigonochlamys imitatrix is a species of predatory air-breathing land slug. It is a shell-less pulmonate gastropod mollusc in the family Trigonochlamydidae.

Paucitubulatina is a suborder of gastrotrichs in the order Chaetonotida.

Ancylolomia tripolitella is a species of moth in the family Crambidae described by Hans Rebel in 1909. It is found in Spain and on Sardinia and in Algeria, Libya, Syria, Jordan and Bahrain.

Carl Heinrich Apstein was a German zoologist and botanist. The standard author abbreviation Apstein is used to indicate this person as the author when citing a botanical name.

Choanomphalus maacki is a species of freshwater air-breathing snail, an aquatic pulmonate gastropod mollusk in the family Planorbidae, the ram's horn snails, or planorbids.

Paul Hesse was a German zoologist, who specialised in the study of Mollusca. In 1926, the Academy of Natural Sciences of Pennsylvania purchased a collection of about 50,000 specimens from Hesse, mainly focusing on non-marine molluscs from Europe.

Nearcticorpus is a genus of flies belonging to the family Lesser Dung flies.

Neodasys is a genus of gastrotrichs in the class Chaetonotida. It is the only genus in the family Neodasyidae, which is the only family in the suborder Multitubulatina.

Dasydytidae is a family of gastrotrichs in the order Chaetonotida.

Pseudocleopatra is a genus of freshwater snails in the family Paludomidae.