John Bell Williams (December 4, 1918 – March 25, 1983) was an American Democratic politician who served as Governor of his native Mississippi from 1968 to 1972, after defeating numerous candidates. He had a history of supporting racial segregation but complied with a federal court order to finally desegregate Mississippi's public schools.

John Bell Williams was born in 1918 in Raymond, the county seat of Hinds County, near the state capital of Jackson. He graduated in 1938 from Hinds Community College, then known as Hinds Junior College. He attended the University of Mississippi at Oxford and graduated in 1940 from Mississippi College School of Law, then known simply as the Jackson Law School.

In November 1941, he enlisted with the United States Army Air Corps and served as a pilot during World War II. He retired from active service after losing the lower part of his left arm as a result of a bomber crash in 1944. [1]

In November 1946, Williams was elected at the age of 27 (he turned 28 in December) to the U.S. House of Representatives as a Democrat from the 7th congressional district. (It was eliminated in 1950 and he was later elected from the 4th and 3rd congressional districts. This was redefined in 2003.) He was the youngest U.S. Representative to have been elected from Mississippi.

Williams advocated states' rights and segregation. He joined his state’s delegation in a walkout of the 1948 Democratic National Convention in Philadelphia, Pennsylvania. He supported Strom Thurmond’s Dixiecrat presidential campaign, whose primary platform was racial segregation. Thurmond easily carried the electoral vote in Mississippi and three other Deep South states.

After the Supreme Court issued its Brown v. Board of Education ruling on May 17, 1954, which outlawed racial segregation in public schools, Williams made a speech on the House floor branding the day 'Black Monday', [2] and subsequently signed the 1956 Southern Manifesto. Williams supported the Democratic Stevenson-Sparkman campaign in 1952, but he favored unpledged Democratic electors in 1956 and 1960.

In 1964, Williams endorsed Republican Barry M. Goldwater in the general election against U.S. President Lyndon B. Johnson and helped raise funds for Goldwater in Mississippi. [3] Because of his activities for Goldwater, the Democratic caucus (in the House of Representatives) stripped Williams and a colleague, Albert W. Watson of South Carolina, of their House seniority.

Williams remained a Democrat and retained his seat in 1966. Watson soon defected to the GOP.

In 1967, Williams ran for governor. The field of candidates was large, including former Governor Ross Barnett and two future governors, William Winter and Bill Waller. In the primary campaign, Williams claimed that, during the 1962 desegregation of the University of Mississippi, former Governor Ross Barnett made a secret deal with the Kennedys over the admission of James Meredith, while publicly claiming to do everything to maintain college segregation. [4]

In the first round of balloting, Williams finished second to the moderate candidate, William Winter. In the runoff, Williams defeated Winter by 61,000 votes. In the general election, Williams handily defeated Democrat-turned-Republican Rubel Phillips, in his second unsuccessful campaign for governor. Phillips’ running mate for lieutenant governor in 1963, Stanford Morse, a member of the Mississippi State Senate from Gulfport from 1956 to 1964, endorsed Williams in the 1967 race.

During the campaign, Williams joked that when the returns were tabulated, the Republicans “won’t be able to find a Rubel in the rubble.” [5]

During Williams’ term as governor, Mississippi was ordered to desegregate its public school system by a federal court, since it had made little progress since the 1954 U.S. Supreme Court ruling that deemed such public schools unconstitutional. A case had been brought by civil rights activists and some desegregation of schools had happened at local levels. Williams did not defy the court. In December 1978, 24 years after Brown v. Board of Education , Mississippi legislature officially removed from its state constitution the mandate that schools be segregated.

After his term, Williams resumed his law practice. Williams endorsed Republicans Gerald Ford in 1976 and Ronald Reagan in 1980 for president, rather than the Democratic nominee both times, Jimmy Carter of Georgia.

Williams died in Rankin County on March 25, 1983, [6] being found dead in his apartment the following day; the cause was ruled to be a heart attack. [7] He was buried on March 28, 1983 and his funeral was held in the first Baptist Church in Jackson the following day. [8] 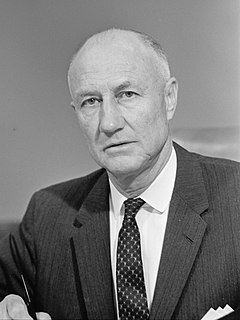 James Strom Thurmond Sr. was a American politician who served for 48 years as a United States Senator from South Carolina. He ran for president in 1948 as the States' Rights Democratic Party candidate on a States Rights platform supporting racial segregation. He received 2.4% of the popular vote and 39 electoral votes but failed to defeat Harry Truman. Thurmond represented South Carolina in the United States Senate from 1954 until 2003, at first as a Southern Democrat and, after 1964, as a Republican.

The States' Rights Democratic Party was a short-lived segregationist political party in the United States, active primarily in the South. After President Harry S. Truman ordered integration of the military in 1948 and other actions to address civil rights of African Americans, Southern conservative white politicians who objected to this course organized this party as a breakaway faction of the Democratic Party, determined to protect Southern states' rights to maintain racial segregation. 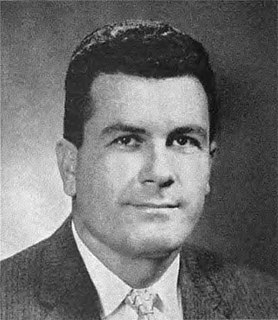 Albert William Watson was a Democrat-turned-Republican state and U.S. representative from South Carolina. He is best known for his losing 1970 campaign for governor, which has been described as the last openly segregationist campaign.

Charles L. Sullivan was an American politician, attorney and military pilot. He was the 24th Lieutenant Governor of Mississippi from 1968 to 1972 serving under Governor John Bell Williams and a General in the United States Air National Guard. An Air National Guard facility in Jackson, Mississippi is named after him. 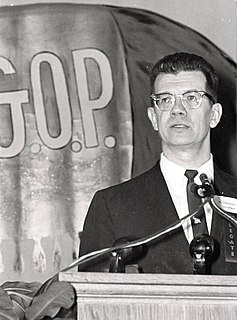 William Douglas Workman Jr., known as W. D. Workman Jr., was a journalist, author, and a pioneer in the development of the 20th century South Carolina Republican Party. He carried his party's banner as a candidate for the United States Senate in 1962 and for the governorship in 1982. He lost to the Democrats, Olin D. Johnston and Richard Riley, respectively. 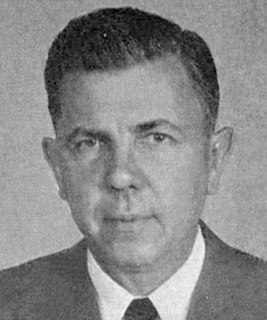 William Arthur Winstead was a farmer and politician, elected as U.S. Representative from Mississippi's 4th congressional district, serving from 1943 to 1965. He surprisingly lost the 1964 election by a substantial margin, when his Republican opponent, Prentiss Walker, benefited by voters supporting Barry Goldwater in his presidential campaign in the state.

Carroll Gartin was an American Democratic politician from Laurel in Jones County in southeastern Mississippi, who served three terms as the 22nd lieutenant governor of his state. He was born in Meridian in eastern Mississippi.

Stanford Everett Morse, Jr., was a lawyer from Gulfport, Mississippi, and a two-term Democratic member of the Mississippi State Senate. In April 1963, he switched to Republican affiliation to run unsuccessfully for lieutenant governor on the ticket headed by Rubel Phillips. A former Democratic member of the Mississippi Public Service Commission from Corinth, Phillips also changed parties in 1963 in a bid to become his state's first GOP governor since Reconstruction.

Cayton Bidwell Adam Sr., known as Bidwell Adam was an attorney from Gulfport, Mississippi, who served as his state's 21st lieutenant governor from 1928 to 1932 during the last administration of Governor Theodore Bilbo. Adam was a fiery old-school political orator who could stir up the Democratic party faithful though on at least two occasions, he endorsed Republican candidates for U.S. President.

Wirt Adams Yerger, Jr., is a retired businessman from Jackson, Mississippi, who is the founding 20th century state chairman of the Mississippi Republican Party, a position that he filled from 1956 to 1966.

Seelig Bartel Wise, sometimes known as Bushie Wise, was a cotton and soybean farmer and businessman from Clarksdale, Mississippi, who from 1964 to 1968 was the first Republican in the Mississippi State Senate since Reconstruction.

Charles Kistner Pringle, Sr., is an attorney in Biloxi, Mississippi, who was one of the first two Republicans to serve in the Mississippi House of Representatives since Reconstruction.

Lewis Leslie McAllister, Jr., also known as Mac McAllister, is a businessman in Tuscaloosa, Alabama, who was the first Republican to serve in the Mississippi House of Representatives since Reconstruction.

Clarke Thomas Reed is a businessman and investor from Greenville, Mississippi, who was from 1966 to 1976 the state chairman of the Mississippi Republican Party. Reed was instrumental in the nomination of U.S. President Gerald R. Ford, Jr., at the 1976 Republican National Convention held in Kansas City, Missouri. 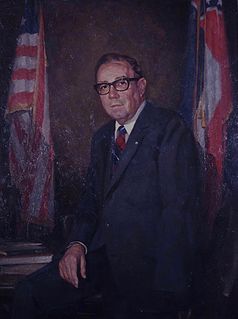 The 1967 Mississippi gubernatorial election took place on November 7, 1967, in order to elect the Governor of Mississippi. Incumbent Democrat Paul B. Johnson Jr. was term-limited, and could not run for reelection to a second term.

The 1963 Mississippi gubernatorial election took place on November 5, 1963, in order to elect the Governor of Mississippi. Incumbent Democrat Ross Barnett was term-limited, and could not run for reelection to a second term.