John Bromley may refer to:

John Bromley was an English clergyman, Catholic convert, and translator.

John Bromley was an English Labour Party politician who served as Member of Parliament (MP) for Barrow-in-Furness from 1924 to 1931, and a trade union leader.

John Bromley is a New Zealand cricket umpire. He has stood in domestic matches in the 2016–17 Plunket Shield season and the 2016–17 Ford Trophy. He has also stood as an umpire in international matches featuring the New Zealand women's cricket team.

John Stevens may refer to:

This article presents lists of the literary events and publications in 1669.

This article presents lists of the literary events and publications in 1610.

This article presents lists of the literary events and publications in 1535.

John Scott may refer to:

Robert, Bob or Bobby Scott may refer to:

John Ward may refer to:

John Payne may refer to:

John or Jack Kelly may refer to:

John Rice may refer to:

William West may refer to:

Events from the year 1643 in England.

John West may refer to:

George Browne may refer to:

The surname Hurley has become the English version of at least three distinct original Irish names: the Ó hUirthile, part of the Dál gCais tribal group, based in Clare and North Tipperary; the Ó Muirthile, from the environs of Kilbrittain in west Cork; and the Ó hIarlatha, from the district of Ballyvourney, also in Cork, whose name is more usually anglicised "(O')Herlihy". The principal concentrations of Hurleys are today found in counties Tipperary and Limerick, where they spread from the original Dalcassian homeland, and in Cork. An interesting example of the pseudo-translation of surnames is found in Clare, where some whose name was originally Hurley have now adopted the surname "Commane", since the Irish for the hurley-stick used in the sport of hurling is camán while the name "Commane" does not originate from that source.

Townsend is a topographic surname of Yorkshire and Norfolk origin, indicating residence at the extremity of a city or burgh Popular variants are Townshend, and Townend. 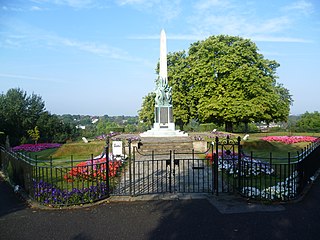 The Bromley War Memorial in Bromley, Greater London, England commemorates the fallen of World War I and World War II. It was designed by British sculptor Sydney March, of the March family of artists.

Terry is a surname which can be a non-Italian version of an Italian surname, or come from the medieval Norman given name Thierry, cognate of the English Derek. Notable people with the surname include: