John Dakyn DCL (1497 – November 9, 1558) was an English cleric and historian. He was archdeacon of the East Riding of Yorkshire and a noted chronicler of the Pilgrimage of Grace. [1]

In his early life Dakyn was chancellor to the Bishop of Bath and Wells, William Knight, and in his will Knight appointed Dakyn his executor. Much of the money that established the Dakyn Trust in the parish of Kirkby Ravensworth was left by Knight. [1] Dakyn was also vicar general to Knight whilst Knight was the absentee holder of the archdeaconry of Richmond. [2] Dakyn played a leading part in the Pilgrimage of Grace. [2] He rose to vicar general of the diocese of York [3] and archdeacon of the East Riding of Yorkshire in 1551. In 1554 he was appointed rector of Kirkby Ravensworth. [4]

In 1556 he established a school and an almshouse for the people of the parish of Kirkby Ravensworth where he had been rector. Initially the endowment of the school and almshouse was in lands, situated principally in the parish of East Coulton. The school and the almshouse have since been closed down, but the John Dakyn Trust continues to benefit local young people and the elderly.

Dakyn was responsible for the North of England's first, and possibly only, burning for heresy in the last three years of Mary's reign. [1] According to John Foxe: "Immediately after D. Dakins geuing sentence that þe other should be burnt, came home to hys house and neuer ioyed after, but dyed." [5] 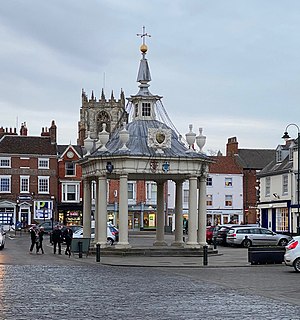 Beverley is a market town and civil parish in the East Riding of Yorkshire, England, of which it is the county town. The town is known for Beverley Minster, Beverley Westwood, North Bar and Beverley Racecourse. It inspired the naming of the city of Beverly, Massachusetts, which in turn was the impetus for Beverly Hills, California. 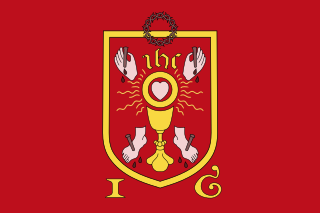 The Pilgrimage of Grace was a popular revolt beginning in Yorkshire in October 1536, before spreading to other parts of Northern England including Cumberland, Northumberland, and north Lancashire, under the leadership of Robert Aske. The "most serious of all Tudor period rebellions", it was a protest against Henry VIII's break with the Catholic Church, the dissolution of the lesser monasteries, and the policies of the King's chief minister, Thomas Cromwell, as well as other specific political, social, and economic grievances.

Nicholas Chamberlaine was a priest in the Church of England who was known for his charitable donations.

Stanwick St John is a village, civil parish, former manor and ecclesiastical parish in the Richmondshire district of North Yorkshire,, England. It is situated between the towns of Darlington and Richmond, close to Scotch Corner and the remains of the Roman fort and bridge at Piercebridge.

Dalton is a village and civil parish in North Yorkshire in England. Dalton is situated about six miles north-west of Richmond and about five miles south-east of Barnard Castle within the council district of Richmondshire and close to the A66 trans-Pennine trunk road. It was listed in the Domesday book. The Dalton parish boundary includes the village itself as well the houses at Dalton Heights plus numerous surrounding farms. The population of the parish was 147 according to the 2001 census, increasing to 181 at the 2011 Census.

Newsham is a village and civil parish in the Richmondshire district of North Yorkshire, England. The village is 8 miles (13 km) north west of Richmond and 13 miles (21 km) south west of Darlington.

Gayles is a village and civil parish in the Richmondshire district of North Yorkshire, England. Gayles is established in the district ward of Gilling West. This small village consists of 80 households, with a total population of 180 according to the 2011 UK census. The area also includes two farms by the names of Gayles Hall Farm and Slip Farm. The village is roughly 10 miles (16 km) west of Darlington.

Kirby Hill, historically also known as Kirby-on-the-Hill, is a village and civil parish in the Richmondshire district of North Yorkshire, England. The village is about 1 mile (1.6 km) south of Ravensworth and about 4 miles (6 km) north-west of the town of Richmond.

Ravensworth is a village and civil parish in the Holmedale valley, within the Richmondshire district of North Yorkshire, England. It is approximately 4.5 miles (7.2 km) north-west of Richmond and 10 miles (16 km) from Darlington. The parish has a population of 255, according to the 2011 census.

The Roman Catholic Diocese of East Anglia is a diocese of the Latin Church of the Roman Catholic Church covering the counties of Cambridgeshire, Norfolk, Suffolk, and Peterborough in eastern England. The diocese makes up part of the Catholic Association Pilgrimage. 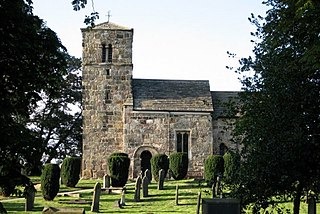 Kirk Hammerton is a village and civil parish in the Harrogate district of North Yorkshire, England. It is near the River Nidd and the A59 road, 10 miles (16 km) west of York. The village suffix refers to the Hamerton family who owned the land until the 16th century.

The Venerable Francis Wrangham was the Archdeacon of the East Riding. He was a noted author, translator, book collector and abolitionist.

Ian Harland was a Church of England cleric, serving as Anglican Bishop of Lancaster then Bishop of Carlisle. 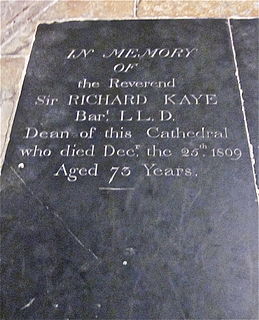 Sir Richard Kaye, 6th Baronet,, LL.D was an English peer, churchman and scientist. He was Dean of Lincoln from 1783, and inherited the baronetcy from his elder brother Sir John Lister Kaye, 5th Baronet in 1789. 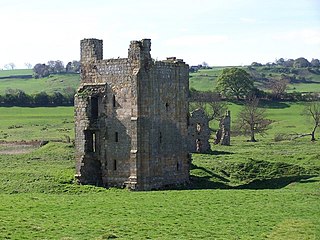 Ravensworth Castle is a ruined 14th-century castle in the village of Ravensworth, North Yorkshire, England. It has been designated a Grade I listed building by English Heritage.

Charles Coleridge Mackarness was the Archdeacon of the East Riding between 1898 and 1916. In his youth, he had been a keen amateur sportsman and played twice in the FA Cup Final for Oxford University, being on the victorious side in 1874 and runner-up in the previous year.

Leslie Cyril Stanbridge was a British Church of England priest. From 1972 to 1988, he was the Archdeacon of York in the Diocese of York.