General John Dale Ryan (December 10,1915 –October 27,1983) was the seventh Chief of Staff of the United States Air Force. As chief of staff of the U.S. Air Force,General Ryan served in a dual capacity. He was a member of the Joint Chiefs of Staff,which,as a body,acts as the principal military advisers to the president,the National Security Council,and the Secretary of Defense. In his other capacity,he was responsible to the Secretary of the Air Force for managing the vast human and materiel resources of the world's most powerful aerospace force.

In May 1972,Ryan was the subject of one of President Richard Nixon's more severe rants. [1]

John Dale Ryan was born in Cherokee,Iowa,on December 10,1915. Following graduation from Cherokee Junior College in 1934,he entered the United States Military Academy,played varsity football, [2] [3] and graduated in 1938. [4] He next attended pilot training in Texas at Randolph and Kelly fields,and received his pilot wings in 1939.

Ryan remained at Kelly Field as a flight instructor for approximately two years. From January 1942 until August 1943,he was director of training at Midland Army Airfield,Texas,and was instrumental in establishing an advanced bombardier training school. His next assignment was as operations officer for the Second Air Force at Colorado Springs,Colorado. In February 1944,he was transferred to Italy,where he commanded the 2d Bombardment Group and later became operations officer for the 5th Bombardment Wing,Fifteenth Air Force. While commanding the 2d Bombardment Group he lost a finger to enemy anti-aircraft fire. Later on,this resulted in his nickname,sometimes used derisively,"Three-fingered Jack."

Ryan returned to Texas in April 1945,and became deputy air base commander at Midland Army Airfield. In September,he was assigned to the Air Training Command at Fort Worth and Randolph Field,where he remained until April 1946,when he assumed duties with the 58th Bombardment Wing and participated in the Bikini Atoll atomic weapons tests.

Ryan also the early staged of Operation Arc Light,which purpose was to provide bombing support that include enemy bases and supply routes and also providing air support for gorund combat operations. In order to support the Operation Arc Light,several fleet of Strategic Air Command's Bombers Aircraft,including its fleet of B-52 Stratofortress was deployed into Andresen Air Force Base in Guam and Kadena Air Force Base in Okinawa,Japan. [5] Operation Arc Light played crucial role in the strategic bombing campaign during the Vietnam War and especially in providing the bombing air support to ground combat troops in the battlefield of Vietnam. [5]

On February 1,1967,Ryan was assigned as commander in chief,of The Pacific Air Forces and was succeeded by his Vice Commanders-in-Chief General Joseph J. Nazzaro,who assumed Ryan's position as Strategic Air Command Commanders-in-Chief.

Ryan's tenure as commander of PACAF and later as Air Force Chief of Staff also engendered controversy when he was described as one of a group that helped destroy General Jack Lavelle's career after Lavelle gave fighter pilots permission to shoot back at bona fide threats,something previously denied them by rules of engagement. This was also related to the court-martial of Colonel Jack Broughton,after Broughton attempted to protect one of his pilots who shot back at an anti-aircraft position also in apparent violation of rules of engagement. Ryan's "undue command influence" later resulted in the overturning and expungement of Broughton's conviction by the USAF Board for the Correction of Military Records. [6] During his tenure as Air Force Chief of Staff,Ryan also realized that the Air Force was in need of a complete overhaul that emphasized training,readiness and understanding. [7]

According to Mark Perry 1989 military history book Four Stars:The Inside Story of The Forty-Year Battle Between The Joint Chiefs of Staff and America's Civilian Leaders,Ryan was considered one of the Air Force's major air power strategists in the end of 1960s and was one of the able successors to Curtis LeMay and Thomas D. White. Ryan was also quoted as one of the military's leading critics of the can-do spirit which permeated the New Frontier-Great Society national Leadership. [7] Ryan was also quoted as one of the more outspoken and "stronger Chiefs" within the Joint Chiefs of Staff parlance,especially regarding the slanting of a policy or story that far beyond the truth. [7]

Ryan's son,General Michael E. Ryan,also held the position of chief of staff. Unlike the elder Ryan's career as bomber pilot,the younger Ryan (b. 1941) and his brother John (1940–1970) were both fighter pilots.

Ryan died of a heart attack at age 67 on October 27,1983,while hospitalized at the Air Force's Wilford Hall Medical Center adjacent to Lackland AFB in San Antonio,Texas. [8] He was later buried with full military honors at the United States Air Force Academy Cemetery in Colorado Springs,Colorado. He was survived by his wife,the former Jo Carolyn Guidera,his son,Colonel (later General) Michael E. Ryan,and a daughter,Patricia Jo Ryan. Another son,Captain John D. Ryan,Jr.,was killed in 1970 when his F-4 Phantom II crashed into San Pablo Bay during a training mission,shortly after takeoff from Hamilton AFB in Marin County,California. [9] [10]

In July 1971,Ryan became the first foreign dignitary to receive the Golden Wings of the Philippine Air Force. Additional foreign decorations are Chilean Military Star of the Armed Forces,Class of Great Star for Military Merit.

George Scratchley Brown was a United States Air Force general who served as the eighth chairman of the Joint Chiefs of Staff. In this capacity,he served as the senior military adviser to the president of the United States,the National Security Council and the secretary of defense. Through the commanders of the unified and specified commands,he was also responsible for executing the decisions of the National Command Authorities regarding worldwide readiness and employment of combat forces of the United States Army,Navy,Air Force and Marine Corps. 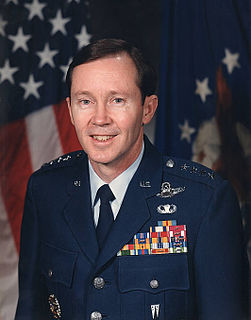 George Lee Butler,sometimes known as Lee Butler,is an American retired military officer. He was commander in chief,United States Strategic Command,and the last commander of Strategic Air Command. Following his retirement from the military he became active in the nuclear disarmament movement,calling for the outright abolition of nuclear weapons.

Eugene Emil Habiger is a retired United States Air Force four-star general who served as Commander in Chief,United States Strategic Command (USCINCSTRAT) from 1996 to 1998. After retiring from the military on August 1,1998,he served as Director of Security and Emergency Operations,U.S. Department of Energy,from 1999 to 2001.

David Arthur Burchinal was a United States Air Force four-star general who served as Deputy Commander in Chief,United States European Command from 1966 to 1973.

General Jerome Francis O'Malley was a United States Air Force four-star general who served as Vice Chief of Staff,U.S. Air Force (VCSAF) from 1982 to 1983;Commander in Chief,Pacific Air Forces (CINCPACAF) from 1983 to 1984;and Commander,Tactical Air Command (COMTAC) from 1984 to 1985. He died in an airplane crash while still in command of Tactical Air Command.

Thomas Martin Ryan Jr. is a retired United States Air Force general who served as the commander of Air Training Command (COMATC) from 1981 to 1983 and as Commander in Chief of the Military Airlift Command (CINCMAC) from 1983 to 1985.

Ray Benjamin Sitton was an American lieutenant general,command pilot and navigator. He was Director of the Joint Staff,Organization of the Joint Chiefs of Staff,Washington,D.C. 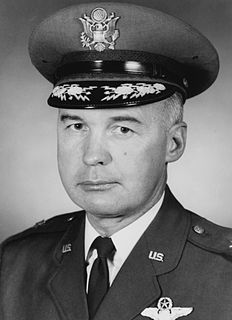 Lieutenant General E.G. "Buck" Shuler Jr. was commander of Strategic Air Command's Eighth Air Force in Barksdale Air Force Base,Louisiana. Eighth Air Force is responsible for Strategic Air Command operations in the eastern half of the United States,Europe and the Middle East. It comprises about half of SAC's long-range force of manned bombers,tankers and intercontinental ballistic missiles. 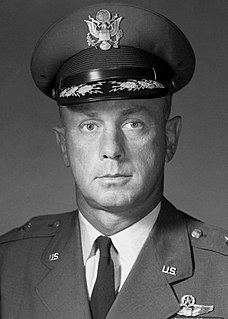 William Joseph Crumm,was a United States Air Force major general who was killed in July 1967,during the Vietnam War. General Crumm commanded the 3d Air Division from 1965 until his death in a B-52 mid-air collision with another B-52 bomber over the South China Sea. General Crumm was the first American general officer and the first of two Air Force general officers (pilots) who were killed during the Vietnam War.

Stanley C. Beck is a retired major general in the United States Air Force. He was the vice commander of the Strategic Air Command's 15th Air Force at March Air Force Base,California.

Major General Robert Francis Durkin of the United States Air Force was Director of Defense Mapping Agency from October 1987 to June 1990. As director,Durkin restructured the Defense Mapping Agency's international and domestic training in the production and exploitation of geospatial information.

Melbourne Kimsey is a retired brigadier general in the United States Air Force who served as director of the Cheyenne Mountain Complex from 1981 to 1983,