Last updated February 12, 2021
This article is about the American military officer. For the English politician, see John Doughty (MP). For the Welsh footballer, see Jack Doughty.

Born in New York City on July 25, 1754, he graduated from King's College (Columbia University) in 1770 and entered military service through New Jersey state channels in January 1776.

He served as adjutant general of two Morris County battalions and was appointed captain lieutenant of the New Jersey Eastern Artillery Company in March 1776. Doughty became a captain of the 2nd Continental Artillery Regiment in January 1777 and served as an aide-de-camp to Major General Philip Schuyler. Later, he was assigned to command the New York State Artillery Company in March 1777.

Doughty would participate in the battles of Brandywine (1777), Germantown (1777), Monmouth (1778), Springfield (1780), and Yorktown (1781). He was appointed brigade major of the Corps of Artillery in 1779 and was appointed fort major for the West Point garrison in 1782. He was transferred to the Corps of Artillery in June 1783 and was promoted to brevet major in September. Doughty's artillery company was attached to Henry Jackson's 1st American Regiment following in the disbanding of the Continental Army late in 1783.

Doughty became the Army's senior ranking officer following the discharge of Jackson's regiment in June 1784, leaving Doughty in command of a company of 55 artillerymen at West Point and a detachment of 25 men at Fort Pitt in Pennsylvania guarding military stores left over from the Continental Army.

On August 12 of the same year, an Infantry regiment was organized under Brevet Brigadier General Josiah Harmar, who then became the senior officer in the United States Army. On that date, Doughty was promoted to major and placed in command of a battalion of two companies of artillery. In this position he superintended the construction of Fort Harmar (1785) and Fort Washington (1789) on the Ohio frontier.

Doughty was designated major commandant of the Battalion of Artillery in September 1789, and then was dispatched by President Washington to the frontier to negotiate with the Choctaw Nation for trading post sites in 1789. He was repelled with serious losses when attacked by Cherokee, Shawnee, and Muscogee people, while leading a detachment up the Tennessee River on a negotiating mission to the Chickasaw Nation in 1790.

In March 1791 Doughty was offered the position of lieutenant colonel commandant (i.e. commanding officer) of the newly formed 2nd Infantry Regiment. Doughty declined the appointment and decided to retire from the Army instead.

Doughty was appointed brigadier general of artillery, 2d Division, New Jersey militia in 1793 and was appointed lieutenant colonel, 2d Regiment of Artillerists and Engineers, as war with France threatened in June 1798.

In May 1800 Doughty resigned from the Army and returned to private life on his estate at Morristown, New Jersey, to engage in agriculture and pursue literary studies. He died there on September 16, 1826. He is buried in the First Presbyterian Church Cemetery in Morristown. [1]

The Continental Army was formed by the Second Continental Congress after the outbreak of the American Revolutionary War by the former thirteen British colonies that later became the United States of America. Established by a resolution of the on June 14, 1775, it was created to coordinate the military efforts of the Thirteen Colonies in their ultimately successful war for independence. The Continental Army was supplemented by local militias and volunteer troops that remained under control of the individual states or were otherwise independent. General George Washington was the commander-in-chief of the army throughout the war. 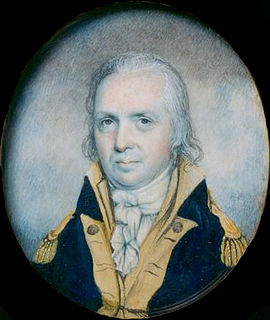 Josiah Harmar was an officer in the United States Army during the American Revolutionary War and the Northwest Indian War. He was the senior officer in the Army for six years and seven months. 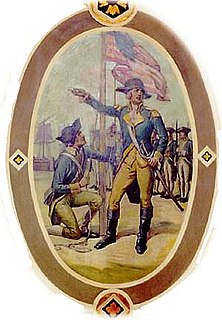 Jean-François Hamtramck (1756–1803) was a French Canadian who served as an officer in the US Army during the American Revolutionary War and the Northwest Indian War. In the Revolution, he participated in the Invasion of Quebec, the Sullivan Expedition, and the Siege of Yorktown. In the history of United States expansion into the Northwest Territory, Hamtramck is connected to 18th century forts at modern Midwest cities such as Steubenville, Vincennes, Fort Wayne, and Detroit. The town of Hamtramck, Michigan is named for him. 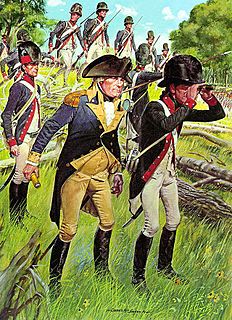 The Legion of the United States was a reorganization and extension of the Continental Army from 1792 to 1796 under the command of Major General Anthony Wayne. It represented a political shift in the new United States, which had recently adopted the United States Constitution. The new Congressional and Executive branches authorized a standing army composed of professional soldiers, rather than relying on state militias. 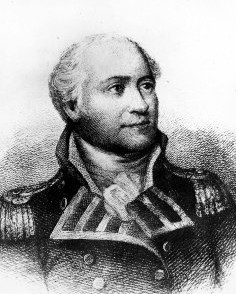 Henry Burbeck was a long-time artillery officer in the United States Army who served from the early days of the American Revolutionary War through the War of 1812. He served as Chief of Engineers from 1798 to 1802. 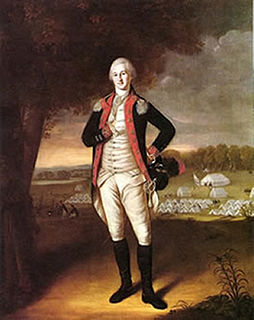 The 2nd Pennsylvania Regiment, formed with lauded veterans from the 1st Pennsylvania Battalion, was raised in December 1776.

The 8th Pennsylvania Regiment or Mackay's Battalion was an American infantry unit that became part of the Continental Army during the American Revolutionary War. Authorized for frontier defense in July 1776, the eight-company unit was originally called Mackay's Battalion after its commander, Colonel Aeneas Mackay. Transferred to the main army in November 1776, the unit was renamed the 8th Pennsylvania Regiment on 1 January 1777. It completed an epic winter march from western Pennsylvania to New Jersey, though Mackay and his second-in-command both died soon afterward. In March 1777 Colonel Daniel Brodhead IV assumed command. The regiment was engaged at the Battles of Bound Brook, Brandywine, Paoli, and Germantown in 1777. A body of riflemen were detached from the regiment and fought at Saratoga. Assigned to the Western Department in May 1778, the 8th Pennsylvania gained a ninth company before seeing action near Fort Laurens and in the Sullivan Expedition in 1778 and 1779. The regiment consolidated with the 2nd Pennsylvania Regiment in January 1781 and ceased to exist. 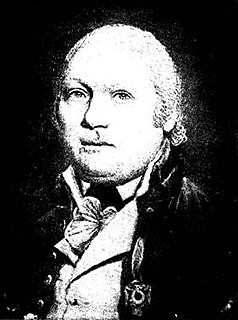 David Ziegler was a German immigrant to the United States who served in the U.S. military and became the first mayor of Cincinnati, Ohio. 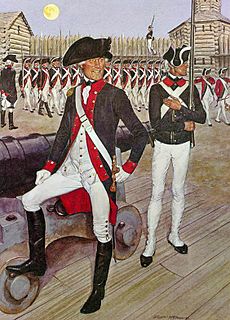 The First American Regiment was the first peacetime regular army infantry unit authorized by the Continental Congress after the American Revolutionary War. Organized in August 1784, it served primarily on the early American frontier beyond the Appalachian Mountains. In 1815, following the end of the War of 1812, it was consolidated with several other regiments to form the 3rd Infantry Regiment.

1st American Regiment, also known as Jackson's Continental Regiment of 1783–1784, was the last unit in the Continental Army, retained after the close of the American Revolutionary War. This regiment, under the command of Colonel Henry Jackson of Massachusetts, was not the same unit as Jackson's Additional Continental Regiment of 1777, which had become the 16th Massachusetts Regiment in 1780 and had been disbanded in 1781. Equally, this regiment should not be confused with the First American Regiment of 1784–1791, which was originally commanded by Colonel Josiah Harmar, has remained in service to the present, and is now the 3d United States Infantry Regiment.

Brevet Brigadier General John Baptiste de Barth Walbach (1766-1857), an Alsatian baron who fought in the French Revolutionary Wars, was one of the few foreign-born senior officers in the US Army prior to the Civil War. On coming to join his father in America, he became an aide to Alexander Hamilton, rising to Adjutant General of the United States during the War of 1812. A career Army officer who served for over 57 years, he remained in active duty until his death at the age of 90, making him the oldest acting officer in U.S. history. During his long career he commanded most forts on the eastern seacoast: Fort Constitution, Fort Trumbull, Fort Severn, Fort Monroe, Frankford Arsenal, Fort McHenry, and Fort Pickens. His long career left behind many American place names. 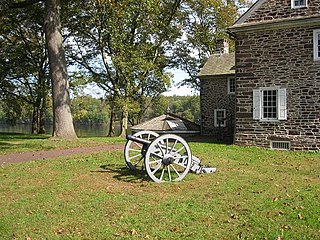 Thomas-Antoine de Mauduit du Plessis or Thomas Duplessis or Thomas-Antoine du Plessis-Mauduit was a French officer who fought with the Continental Army during the American Revolutionary War. Born in Brittany, he ran away to sea at age 12 and voyaged in the eastern Mediterranean Sea for a time. Later, he attended a famous French artillery school. He was among a number of volunteers to join the fledgling American army in 1777, especially distinguishing himself for bravery at Germantown and skill at Red Bank. At Valley Forge he helped train American officers in the finer points of tactics and artillery handling.

Thomas Hunt (1754—1808) was an American military officer who served in the Continental Army during the American Revolutionary War and later served in the United States Army where he rose to the rank of colonel and served until his death.

In the early years of the Republic, the United States Army experimented with a number of different artillery formations. For a time, the Artillery Branch and Engineer Branch were combined. Unit designations did not yet contain the terms "Field Artillery" or "Coast Artillery," although units so designated, as well those of the air defense artillery, would eventually trace their lineage and honors to some of the early formations.

Moses Porter was a general in the United States Army during the War of 1812. His career lasted for over 40 years and he is one of the few officers who served in both the American Revolution and the War of 1812.