John Freely (26 June 1926 – 20 April 2017 [1] ) was an American physicist, teacher, and author of popular travel and history books on Istanbul, Athens, Venice, Turkey, Greece, and the Ottoman Empire. He was the father of writer and Turko-English literary translator Maureen Freely. [2]

Freely was born in Brooklyn, New York, and grew up there and in Ireland. [3] He dropped out of high school and joined the U.S. Navy at the age of 17 for the last two years of World War II, serving with a commando unit in Burma and China. He did his undergraduate work at the traditional American Catholic college, Iona College in New Rochelle, New York, under the G.I. Bill. [3]

Freely received his PhD in physics at New York University, and later pursued his postdoctoral studies at Oxford University under Alistair Cameron Crombie, the pioneering researcher in the history of Medieval European science. The principal idea he inherited from Crombie was "the continuity of western European science from the Dark Ages through Copernicus, Galileo and Newton". Following his postdoctoral work, he went in 1960 to Istanbul, Turkey, and took up a post at Robert College (later Boğaziçi University). He subsequently taught courses there in physics, the history of science and astronomy, including the course "The Emergence of Modern Science, East and West", [4] with sojourns in New York City, Boston, London, Athens, Oxford, and Venice. He returned to Boğaziçi University in 1993.

Freely was the author of more than 40 books. 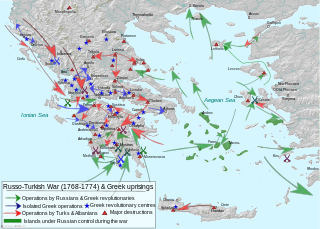 The Orlov revolt was a Greek uprising in the Peloponnese and later also in Crete that broke out in February 1770, following the arrival of Russian Admiral Alexey Orlov, commander of the Imperial Russian Navy during the Russo-Turkish War (1768–1774), at the Mani Peninsula. The revolt, a major precursor to the Greek War of Independence, was part of Catherine the Great's so-called "Greek Plan" and was eventually suppressed by the Ottomans. 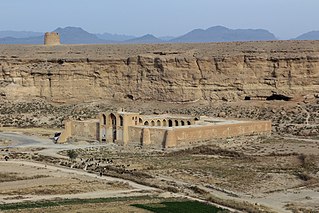 A caravanserai was a roadside inn where travelers (caravaners) could rest and recover from the day's journey. Caravanserais supported the flow of commerce, information and people across the network of trade routes covering Asia, North Africa and Southeast Europe, most notably the Silk Road. Although many were located along rural roads in the countryside, urban versions of caravanserais were also historically common in cities throughout the Islamic world, though they were often called by other names such as khan, wikala, or funduq.

Boğaziçi University is a major research university in Istanbul, Turkey. Its main campus is located on the European side of the Bosphorus strait. It has four faculties and two schools offering undergraduate degrees, and six institutes offering graduate degrees. The language of instruction is English.

A bedesten is a type of covered market or market hall which was historically found in the cities of the Ottoman Empire. It was typically the central building of the commercial district of an Ottoman town or city, where the most important and precious goods were kept and sold. Its function was comparable or equivalent to that of a qaysariyya in other regions, though the architecture of the latter could be different and be similar to that of a bazaar with its own streets.

Pilaki is a style of Turkish meze and may refer to several dishes that are cooked in a sauce made out of onion, garlic, carrot, potato, tomato or tomato paste, sugar, and olive oil. Beans prepared in this style are served cold, garnished with parsley and slices of lemon. Fish pilaki is also a popular recipe. In Greek cuisine, this style is known as plaki. In Bulgarian cuisine the name is "plakiya". 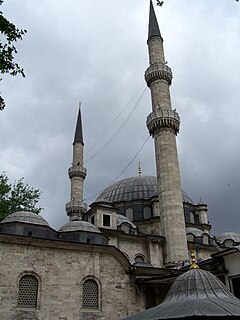 The Eyüp Sultan Mosque is an identical mosque situated in the Eyüp district of Istanbul, outside the city walls near the Golden Horn. The present building dates from the beginning of the 19th century. The mosque complex includes a mausoleum marking the spot where Abu Ayyub al-Ansari, the standard-bearer and friend of the Islamic prophet Muhammad, is said to have been buried.

Perihan Mağden is a Turkish writer. She was a columnist for the newspaper Taraf. She was tried and acquitted for calling for opening the possibility of conscientious objection to mandatory military service in Turkey.

Geyre is a small town in the District of Karacasu, Aydın Province, Turkey. Also known as Yeni koy, it was relocated around 1960, from over the ancient Greek city of Aphrodisias archeological site to a new location nearby.

The Cağaloğlu Hamam is a historic hamam in Istanbul, Turkey. Finished in 1741, it is one of the last major hamams to be built in Istanbul during the Ottoman period. It was built in Eminönü, in Alemdar, on Hilal-i Ahmer street as a public hamam to raise revenue for the library of Sultan Mahmud I situated inside the Ayasofya. It was begun by one of the head architects of that time, Suleyman Ağa, and finished by Abdullah Ağa. The structure consists of a double hamam: a bathhouse for men and another for women. The layout follows the long-established traditional form of hammams, though the architectural details and decoration are in the later Ottoman Baroque style of the 18th century.

An ouzeri is a type of Greek tavern which serves ouzo and mezedes.

The Mosque with the Spiral Minaret is a 16th-century Ottoman mosque in Şarachane park, Fatih district, Istanbul, Turkey. 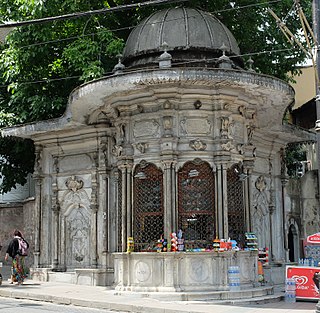 A sebil or sabil is a small kiosk in the Islamic architectural tradition where water is freely dispensed to members of the public by an attendant behind a grilled window. The term is sometimes also used to refer to simple unmanned fountains with a tap for drinking water, though other names often exist for such fountains.

Zeynep Sultan was an Ottoman princess, the daughter of Sultan Ahmed III.

Nara Burnu, formerly Nağara Burnu, in English Nagara Point, and in older sources Point Pesquies, is a headland on the Anatolian side of the Dardanelles Straits, north of Çanakkale.

The Mahmut Pasha Mosque is a 15th-century Ottoman mosque close to the Grand Bazaar in the Eminönü district of Istanbul, Turkey.

The Büyük Valide Han is the largest historic han (caravanserai) in Istanbul, Turkey. It was founded in 1651 by Kösem Valide Sultan, the mother of the Ottoman sultans Murat IV and Ibrahim.

The Mahmut Pasha Hamam is a historic Ottoman hammam in Istanbul, Turkey. Founded by Mahmud Pasha, the grand vizier of Mehmet II, it was completed in 1466 and is one of the oldest surviving bathhouse structures in the city. It was part of the complex of the Mahmud Pasha Mosque, located northeast of the Grand Bazaar. After suffering damage over time, it was restored in the 20th century and now serves as a local shopping centre.

The Kürkçü Han is a large historic han (caravanserai) in Istanbul, Turkey. Founded by Mahmud Pasha, the grand vizier of Mehmet II, it was completed in 1467 and is the oldest surviving caravanserai in the city, although it has been modified, partly ruined, and renovated over the centuries.