John Gordon was the natural son of Alexander Gordon (c. 1516–1575), Bishop of Galloway and former archbishop of Glasgow, and Barbara Logie; his parents married, perhaps clandestinely, only in 1546, before Alexander obtained ecclesiastical preferment (for this, see his new DNB entry).

Gordon first studied at St Leonard's College, St. Andrews. In June 1565 he was sent to pursue his education in France, having a yearly pension granted him by Mary, Queen of Scots, payable out of her French dowry. He spent two years at the universities of Paris and Orleans. On 4 January 1568 he was confirmed by royal charter in the bishopric of Galloway and abbacy of Tongland, vacated in his favour by his father; the charter specifies his skill in classical and oriental tongues. At this time he was in France, in the service of the Protestant leader, Prince Louis of Conde, but he soon came to England, entered the service of Thomas, Duke of Norfolk, and attended him at the conferences of York (October 1568) and Westminster (November 1568), held for the purpose of considering Mary's guilt.

When Norfolk was sent to the Tower (October 1569), Gordon transferred his services to Mary herself, and seems to have remained with her till January 1572, when she was deprived of her household. Mary commended him to the French king, and he enjoyed the post of gentleman ordinary of the privy chamber to Charles IX, Henry III, and Henry IV, with a yearly pension of four hundred crowns. He saved the lives of several countrymen at the St. Bartholomew's Day massacre, but never renounced Protestantism. In 1574 he exhibited his Hebrew learning in a public disputation at Avignon with the chief rabbi Benetrius. By his marriage in 1576 with Antoinette, widowed daughter of Rene de Marolles, he acquired an estate which gave him the style of "Sieur of Longorme". With the see of Galloway his connection was never more than nominal, the revenues going to his father or to his brother George.

Gordon is mentioned in 1588 as Bishop of Galloway; but he resigned his rights before 8 July 1586. His first wife died in 1591. He married in 1594 a strong Protestant, Genevieve, daughter of François Petau, sieur of Maulette. On 18 July 1594 in Paris, he signs the marriage contract between Suzanne Hotman and her first husband John Menteith, calling himself "Gentleman of the Bedchamber of the King [and] Seigneur of Boullay-Thierry". In 1601 he was selected by the Duchess of Lorraine, sister of Henry IV, to take part with Daniel Tilenus and Pierre Du Moulin in a public disputation against Du Perron (afterwards cardinal), who had been charged with the task of converting her to the Roman Catholic Church.

On the accession of James I to the English throne (1603), Gordon published in French and English a strongly Protestant panegyric of congratulation and, in the same year, a piece in Latin elegiacs addressed to Prince Henry. James called him to England and nominated him in October to the deanery of Salisbury, whereupon he was ordained in his 59th year. He was present at the Hampton Court conference in January 1604 as "deane of Sarum",' though he was not confirmed until 24 February. In the second day's conference, James singled him out "with a speciall encomion, that he was a man well trauailled in the auncients."[ citation needed ] He approved of the ring in marriage, but doubted the cross in baptism.

Gordon preached often at court and, among the "pulpit-occurrents" of 28 April 1605, it is mentioned that "Deane Gordon, preaching before the kinge, is come so farre about in matter of ceremonies, the out of Ezechiell and other places of the prophets, and by certain hebrue characters, and other cabalisticall collections, he hath founde out and approved the vse of the crosse cap surplis et ct."[ citation needed ] During James' visit to Oxford in 1605 he was created a Doctor of Divinity (D.D.) on 13 August "because he was to dispute before the king his kinsman."[ citation needed ] He is described as of Balliol College. His second wife Genevieve Petau de Maulette taught French to Princess Elizabeth (1596–1662), afterwards queen of Bohemia. In 1611 the barony of Glenluce, which had belonged to his brother Lawrence, was bestowed on him by royal charter.

During the ten years 1603-13 Gordon produced a number of quartos notable for obscure learning, Protestant fervour, controversial elegiacs, and prophetic anticipations drawn from the wildest etymologies. He was assiduous in his ecclesiastical duties, which included a quasi-episcopal supervision of some eighty parishes. He procured an act of the chapter devoting one-fifth of the revenue of every prebend for seven years to cathedral repairs. While on a triennial visitation he died at Lewston House, Dorset, in his seventy-fifth year. He was buried on 6 September in the morning chapel of his cathedral, where an inscribed stone marks his grave.

On the north wall of the choir there was a brass (which no longer exists) "bearing the figure of a bishop, raised from his tomb by two angels", with a long biographical epitaph in Latin (given in the 1723 history of the cathedral). The dean assigned the barony of Glenluce with all his French property to Sir Robert Gordon, whom he made his literary executor. He left books to the cathedral library, and a legacy for rebuilding the cloisters.

According to John Strype, he wrote (1571) 'a book in Latin' defending Mary's rights. His discussion with Benetrius is said to have been printed.

In 1576 he married Antoinette, widowed daughter of Rene de Marolles, he acquired an estate which gave him the style of "Sieur of Longorme." By his first wife he had a son Armand Claude, who was wounded at Pavia, and died on his way to Scotland; George, who died in the college of Beauvais; and two daughters who died young. C. A. Gordon, who gives a somewhat questionable pedigree of the descendants of Armand Claude, says that he had his first name from Cardinal Richelieu, his godfather; if so, he must have received catholic baptism rather late in life.

Gordon's second wife Genevieve Petau de Maulette taught French to Princess Elizabeth (1596–1662), afterwards queen of Bohemia. [1] She died at Gordonstoun, Morayshire, on 6 December 1643, in her eighty-third year, and was buried at the Michael Kirk in the old churchyard of Oggston, parish of Drainie, Moray. Their daughter Lucie (or Louise), born 20 December 1597, was brought up with Princess Elizabeth in Lord Harington's household at Coombe Abbey. She married the family historian Sir Robert Gordon (1580–1656) in February 1613, and died in September 1680, aged 83. [2] Their daughter Katherine was mother of Robert Barclay, the apologist.

Samuel de Champlain was a French colonist, navigator, cartographer, draftsman, soldier, explorer, geographer, ethnologist, diplomat, and chronicler. He made between 21 and 29 trips across the Atlantic Ocean, and founded Quebec, and New France, on 3 July 1608. An important figure in Canadian history, Champlain created the first accurate coastal map during his explorations, and founded various colonial settlements.

Archibald Douglas, 8th Earl of Angus and 5th Earl of Morton was the son of David, 7th Earl of Angus. He succeeded to the title and estates in 1558, being brought up by his uncle, James Douglas, 4th Earl of Morton, a Presbyterian. In 1573 he was made a Privy Councillor and Sheriff of Berwickshire; in 1574 Lieutenant-General in Scotland; in 1577 Warden of the West Marches and Steward of Fife; and in 1578 Lieutenant-General of the realm. As a supporter of Morton and "ultra-Protestant" policy he was twice forced in exile in England.

Glenluce Abbey, near to Glenluce, Scotland, was a Cistercian monastery called also Abbey of Luce or Vallis Lucis and founded around 1190 by Rolland or Lochlann, Lord of Galloway and Constable of Scotland. Following the Scottish Reformation in 1560, the abbey fell into disuse. 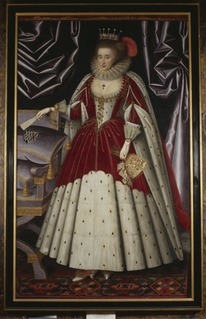 Patrick Galloway was a Scottish minister, a Moderator of the General Assembly of the Church of Scotland. "The King wold needis have Mr Patrik Galloway to be his minister." He was Moderator of the General Assembly in 1590, and again in 1602. Having been completely gained over by the Court party he used all his influence in forwarding the views of the King for the introduction of Episcopacy.

Madame Geneviève Pétau de Maulette, Lady Glenluce was a French noblewoman, tutor to Elizabeth of Bohemia, author and the second wife of John Gordon, D.D., Dean of Salisbury and Lord Glenluce and Longormes. 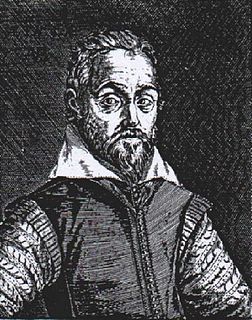 Joseph Duchesne or du Chesne (c.1544-1609) was a French physician. A follower of Paracelsus, he is now remembered for important if transitional alchemical theories. He called sugar toxic, saying: “Under its whiteness, sugar hides a great blackness.” 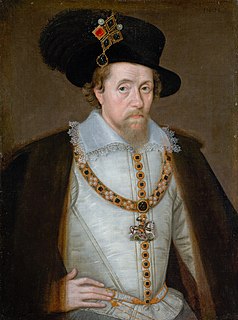 The Jacobean debate on the Union took place in the early years of the reign of James I of England, who came to the English throne in 1603 as James VI of Scotland, and was interested in uniting his Kingdoms of England and Scotland. With one monarch on the two thrones there was de facto a "regnal union", but since James was very widely accepted in England, the debate was not on that plane. A political union was more controversial and is often referred to as a "statutory union", underlining the fact that the legal systems and institutions involved were different, and had had distinct historical paths. That wider union did not in fact come about in the 17th century, but at the time of the Union of England and Scotland in 1707, arguments from the earlier period were again put into circulation.

Sir Robert Gordon of Gordonstoun (1580–1656) was a Scottish politician and courtier, known as the historian of the noble house of Sutherland.

Sir John Gordon of Lochinvar and Kenmure, was a Scottish courtier and landowner.

Alexander Gordon, 12th Earl of Sutherland was a Scottish landowner.