John Henry Norrison Camidge (8 December 1853 - 22 September 1939) was a composer and organist based in Beverley, East Riding of Yorkshire.

Beverley is a historic market town, civil parish and the county town of the East Riding of Yorkshire, England. The town is known for Beverley Minster, Beverley Westwood, North Bar and Beverley Racecourse. It inspired the naming of the city of Beverly, Massachusetts, Which in turn was the impetus for Beverly Hills, California.

Thomas Simpson Camidge was an organist and composer based in England.

He was a chorister at Christ Church Cathedral, Oxford. He matriculated in 1875.

Beverley Minster in Beverley, East Riding of Yorkshire, is a parish church in the Church of England. It is one of the largest parish churches in the UK, larger than one-third of all English cathedrals and regarded as a gothic masterpiece by many.

He was also music master at Beverley High School and conductor of the Beverley Choral Society.

The Cathedral and Metropolitical Church of Saint Peter in York, commonly known as York Minster, is the cathedral of York, England, and is one of the largest of its kind in Northern Europe. The minster is the seat of the Archbishop of York, the third-highest office of the Church of England, and is the mother church for the Diocese of York and the Province of York. It is run by a dean and chapter, under the Dean of York. The title "minster" is attributed to churches established in the Anglo-Saxon period as missionary teaching churches, and serves now as an honorific title. Services in the minster are sometimes regarded as on the High Church or Anglo-Catholic end of the Anglican continuum.

Hexham Abbey is a Grade I listed place of Christian worship dedicated to St Andrew, in the town of Hexham, Northumberland, in northeast England. Originally built in AD 674, the Abbey was built up during the 12th century into its current form, with additions around the turn of the 20th century. Since the Dissolution of the Monasteries in 1537, the Abbey has been the parish church of Hexham. In 2014 the Abbey regained ownership of its former monastic buildings, which had been used as Hexham magistrates' court, and subsequently developed them into a permanent exhibition and visitor centre, telling the story of the Abbey's history. 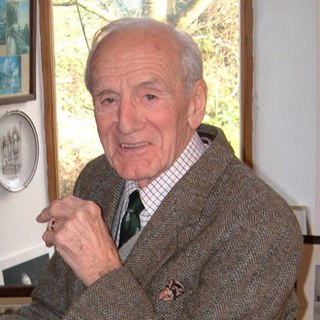 Francis Alan Jackson, CBE is a British organist and composer. He was the organist and director of music at York Minster for 36 years. 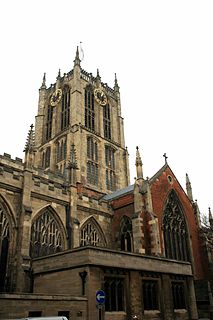 Hull Minster is an Anglican minster in the centre of Kingston upon Hull, East Riding of Yorkshire, England. The church was called Holy Trinity Church until 13 May 2017 when it became Hull Minster.

Arthur Henry Mann was an English organist and composer of hymn tunes including "Angel's Story" which was originally written for the hymn 'I love to hear the story', but is also sung to the words 'O Jesus, I have promised.' He was most noted for his role as organist and director of music at King's College Chapel, Cambridge from 1876 until 1929, being the founder director of the world famous tradition of the Festival of Nine Lessons and Carols since its first performance in 1918. In 1888, he published his own edition of Thomas Tallis's Spem in alium. His edition, though flawed, was the first publication ever made of Tallis's famous motet in forty parts.

Marcus Wibberley is a British organist, conductor and choir trainer. He is Director of Music at St George's Church, Beckenham.

Wallace Michael Ross was the founder of the Derby Bach Choir. He was also the Master of Music at Derby Cathedral, assistant organist at several great English Cathedrals and a teacher of languages and music at several schools, including Sturgess School in Derby. He also founded the Derby Cathedral Brass Ensemble and the Derby Sinfonia.

Langdon Colbourne was an English cathedral organist, who served at Hereford Cathedral.

William Camidge F.R.H.S. (1828-1909) was a British solicitor and author based in York. He wrote histories of Methodism and a biography of the painter William Etty. He was a Royal Historical Society, and a Primitive Methodist associated with Elmfield College.

Edwin George Monk, English church organist and composer, who was Organist and Master of Choristers at York Minster for a quarter of a century, and was previously associated with St Columba's and Radley Colleges. He was born on 13 December 1819 at Frome, Somerset, and died on 3 January 1900 at Radley, near Abingdon, Oxfordshire.

Charles Legh Naylor was a composer and organist based in Harrogate.

Dr. Herbert Kennedy Andrews FRCO was a composer and organist based in the East Riding of Yorkshire, and Oxford.

The Venerable Canon Brough Maltby was Archdeacon of Nottingham.