John Henry "J.H." Taylor (19 March 1871 – 10 February 1963) was an English professional golfer and one of the pioneers of the modern game of golf. Taylor is considered to be one of the best golfers of all time. He was a significant golf course architect. Taylor helped to found the British PGA, the world's first, and became respected for his administrative work. He also wrote two notable golf books.

Taylor was born in Northam, Devon. He was a member of the fabled Great Triumvirate of the sport in his day, along with Harry Vardon and James Braid, and he won The Open Championship five times. [1] Born into a working-class family, and orphaned as a boy, he began work as a caddie and labourer at the Royal North Devon Golf Club (also known as Westward Ho!) at the age of eleven. He was employed as a caddie and houseboy by the Hutchinson family and was tasked to carry the bag of Horace Hutchinson. [2] He became a professional golfer at 19, and was employed by Burnham & Berrow Golf Club, the Winchester (later Royal Winchester) Golf Club – while there winning in successive years the first two of his Open Championships – then the Royal Wimbledon Golf Club, before eventually moving to the Royal Mid-Surrey Golf Club from 1899 until his retirement in 1946.

In 1901, Taylor was a co-founder and the first chairman of the British Professional Golfers' Association. This was the first association for professional golfers in the world. Bernard Darwin wrote that Taylor "had turned a feckless company into a self-respecting and respected body of men".

Taylor was a factor in the Open Championship from age 22 in 1893, until age 55, when he tied for 11th place in 1926. His five Open victories all took place before the First World War.

Taylor captained the 1933 Great Britain Ryder Cup team to a win over the United States, and remains the only captain on either side never to have played in any of the matches.

Taylor was also involved in designing courses across England including York Golf Club in 1903, Hindhead Golf Club in 1904, Andover Golf Club in 1907, Frilford Heath's Red Course in 1908, Hainault Golf Club's Upper Course in 1909, [3] Heaton Park Golf Club (Manchester) in 1912, Hainault Golf Club's Lower Course in 1923, [3] Bigbury Golf Club in South Devon in 1926, Pinner Hill Golf Club (Middlesex) 1927, [4] Axe Cliff Golf Club (Seaton, Devon) in 1920s [5] and Batchwood Hall Golf Club (St Albans) in 1935. He is attributed with being the inventor of the 'dogleg', [5] although holes of that form had existed on many courses before Taylor began golf course design (for example No. 7 at Old Course at St Andrews and No. 4 at Prestwick Golf Club). He was made an honorary member of The Royal and Ancient Golf Club of St Andrews in 1949, and was president of Royal Birkdale, whose course he had designed, in 1957.

A housing development in his hometown of Northam was named in his honour (JH Taylor Drive).

Note: Taylor only played in The Open Championship and the U.S. Open.

The Open Championship, often referred to as The Open or the British Open, is the oldest golf tournament in the world, and one of the most prestigious. Founded in 1860, it was originally held annually at Prestwick Golf Club in Scotland. Later the venue rotated between a select group of coastal links golf courses in the United Kingdom. It is organised by the R&A. 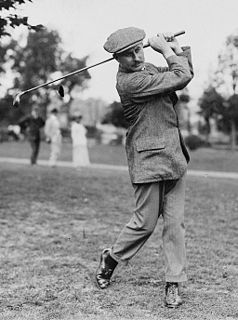 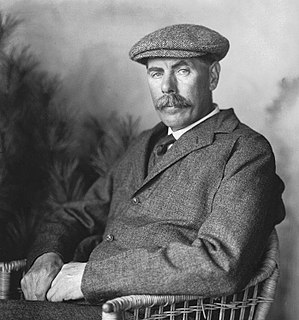 James Braid was a Scottish professional golfer and a member of the Great Triumvirate of the sport alongside Harry Vardon and John Henry Taylor. He won The Open Championship five times. He also was a renowned golf course architect. Braid is a member of the World Golf Hall of Fame. 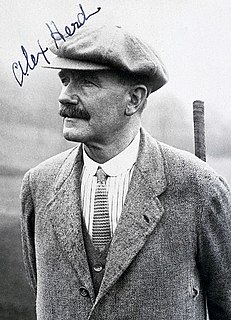 Alexander "Sandy" Herd was a Scottish professional golfer from St Andrews. He won The Open Championship in 1902 at Hoylake. 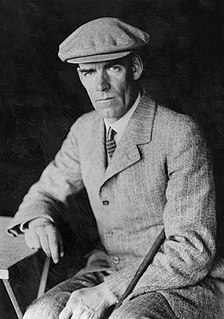 George Duncan was a Scottish professional golfer. He was also a golf course designer. His much sought-after professional teaching and swing analysis skills lead to him being referred to as "the pro's pro." He won the 1920 Open Championship.

Royal North Devon Golf Club was founded in 1864, and is the oldest golf course in England. The course was designed by Scottish golfer Old Tom Morris. The course was famously host to Day 3 of the fiercely contested Nailsea Open, won by Mr J Summers, with a fine short game on the back nine to seal the victory.

Arthur Lees was an English professional golfer who played from the 1930s to 1960s. He was a member of four Great Britain Ryder Cup teams in the late 1940s and 1950s, and won several tournaments in Europe during his career. In addition, he spent nearly 30 years as the head professional of Sunningdale Golf Club, holding the position until he was almost 70 years old.

Bert Hodson (1905–1971) was a Welsh professional golfer who played in the early 20th century. Hodson's best performances in major championships came in the 1927 and 1934 Open Championships when he was tied for seventh place in each event. Hodson played on the Great Britain Ryder Cup team in 1931. 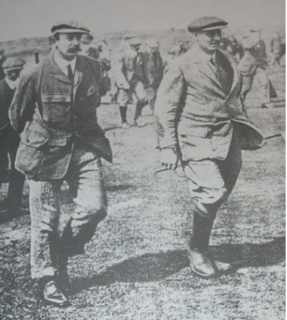 Tom Williamson was an English professional golfer who played in the early 20th century. Williamson finished in the top 10 in the Open Championship on six occasions and played in it over fifty years. His best performance came in the 1914 Open Championship when he tied for fourth place, six shots behind the winner. With Harry Vardon he won the 1913 Sphere and Tatler Foursomes Tournament by a convincing 7 & 5 margin. He was Captain of England in 1909 and represented England between 1904 and 1913. He won the Midland Professional Championship when it was first held in 1897 and a further six times. He was a renowned club maker and was the first to number clubs in 1906. He experimented with score cards placing a course plan on the reverse side in 1930. He won the Midland Challenge Cup, a foursomes event, with different partners on seven occasions between 1903 and 1927. He designed sixty courses, the majority in the East Midlands. He was a founder member of the PGA and became its Captain in 1928. He had a good reputation as a teacher and taught Enid Wilson who won the English Ladies Championship three times. He was known as a modest man of integrity.

Alfred Henry Toogood, Sr. was an English professional golfer who played during the late 19th and early 20th century. Toogood finished fourth in the 1894 Open Championship and won £7. He also tied for ninth place in the 1895 Open Championship.

Thomas George Renouf was an English professional golfer from Jersey who played in the late 19th and early 20th century. He had multiple top-10 finishes in the Open Championship. His best result was fifth in the 1909 Open Championship. Renouf caddied in his youth at Royal Jersey Golf Club and became a skilled club maker as well as a manufacturer of golf balls.

Thomas Bruce Haliburton was a Scottish golfer. He finished tied for 5th in the 1957 Open Championship and played in the 1961 and 1963 Ryder Cups. He died, playing golf, at Wentworth where he had been the professional for over 20 years.

Arthur John "Jack" Rowe was an English professional golfer. Rowe won a tournament at Westward Ho! in 1899 while his best finish in the Open Championship was in 1905 where he finished in a tie for 11th place. He played three times for England against Scotland between 1903 and 1907 and was a professional at Royal Ashdown Forest Golf Club for 55 years. 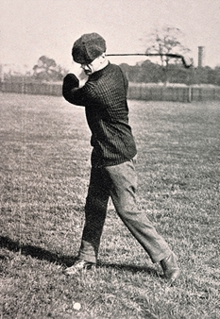 Joshua Taylor was an English professional golfer, the younger brother of J. H. Taylor. He played in the 1913 England–Scotland Professional Match and for Great Britain in the 1921 match against America.