John J. Weinheimer (c. 1896 – December 18, 1951) was an American football player and coach. He served as the head football coach at New York University from 1944 to 1946, compiling a record of 10–12. Weinheimer played football and other sports at NYU. He was awarded a place in NYU's Athletic Hall of Fame for his playing and coaching efforts. [1] Weinheimer died at the age of 55 on December 18, 1951, of a heart attack at his home in New York City. [2]

Robert Calvin Hubbard was an American professional football player and Major League Baseball (MLB) umpire. After playing college football at Centenary College and Geneva College, Hubbard played in the National Football League (NFL) between 1927 and 1936 for the New York Giants, Green Bay Packers and Pittsburgh Pirates, playing the bulk of his career with the Packers. Hubbard is credited as being one of the inventors of the football position of linebacker. 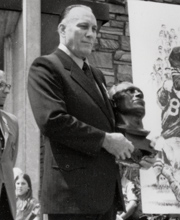 Peter A. Carlesimo was an American football player, coach of football, basketball, and cross country running, and a college athletics administrator. He coached football, basketball, and cross country at the University of Scranton and served as athletic director there and at Fordham University. He is sometimes credited with being the person most responsible for keeping the National Invitation Tournament (NIT) alive in the late 1970s. 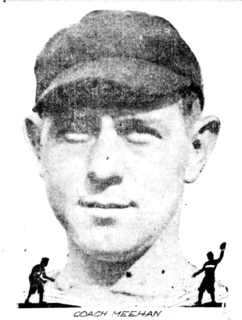 Marvin Allen "Mal" Stevens was an American football player, coach, naval officer, and orthopedic surgeon. He served as the head football coach at Yale University from 1928 to 1932 and at New York University from 1934 to 1941, compiling a career college football record of 54–45–10. He was elected to the College Football Hall of Fame as a player in 1974. 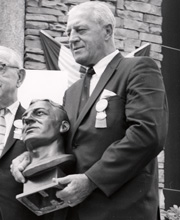 William Curtis Kenyon was an American football and baseball player and coach of football, basketball, and baseball. He served as the head football coach at the University of Maine in 1942 and from 1944 to 1945, compiling a record of 4–11. Kenyon also the head coach of the basketball team at Maine from 1935 to 1943 and again in 1944–45, and the head coach of the baseball team at the school from 1936 to 1943 and again from 1945 to 1949. Kenyon played college football at Georgetown University from 1919 to 1922 and in the National Football League with the New York Giants in 1925. He also played baseball at Georgetown and was inducted into the university's Athletic Hall of Fame in 1927. Kenyon died on May 6, 1951 at a hospital in Bangor, Maine.

Irving "Moon" Mondschein was an American track and field athlete and football player.

John Lewis "Stub" Brickels was a high school, college and professional football coach who served as a backfield coach for the Cleveland Browns between 1946 and 1948. Brickels began his coaching career in 1930, after graduating from Wittenberg University in Ohio, where he was a standout as a halfback on the school's football team. He coached high school football and basketball teams in Ohio and West Virginia in the 1930s and early 1940s before becoming the head basketball coach at the West Virginia University in 1944. He held that post until 1945, when Cleveland Browns coach Paul Brown hired him to recruit players for the Browns, a team under formation in the All-America Football Conference, while Brown served in the U.S. Navy during World War II.

The 1944 NYU Violets football team was an American football team that represented New York University as an independent during the 1944 college football season.

The 1945 NYU Violets football team was an American football team that represented New York University as an independent during the 1945 college football season.