John Jairo Arias Tascón (1961 – 13 June 1990), [1] known as Pinina, was a member of the Medellín Cartel. He obtained power in the cartel's military wing and was accused of hundreds of murders. He was considered to be ranked fifth within the cartel structure. [2] He was a hit man, the boss of hit men and leader of a criminal group at the disposal of the Cartel, known as Los Priscos. [3]

As a child, Arias lived in the Medellin commune, in the barrio (quarter) Lovaina. He was born to a poor family. He became a thief at twelve, then joined a gang and finally became a hit man at age 15. [3] One story holds that one day he went to a park near San Pedro cemetery, where he stole a music player from a car that belonged to Pablo Escobar. One of Pablo's men started asking around and found that Arias had broken into the car. He informed Pablo Escobar of the feat. Escobar then asked Pinina to be a member of the cartel. [4]

Arias died on 13 June 1990, when the Colombian police raided his apartment in the neighborhood, El Poblado of Medellín. He tried to escape through a window on the third floor, but fell, injuring his ankle, head and right arm. He was able to stand up and tried to walk to his car, but upon encountering the police, he retreated into the apartment building. On the first floor he engaged in a fight with police officers and was eventually killed. He was 29 years old at the time of his death. After his death, the Medellín Cartel started to fall apart. In retaliation, Escobar ordered his men to drive a car-bomb into the police station of El Poblado, causing severe damage. [3] His body was buried in cemetery in Medellín. [4]

In 2012, Caracol Televisión premiered the series Pablo Escobar, The Drug Lord , inspired by the life of the cartel chief. In it, the character of John Jairo Arias was portrayed using the alias "El Chili".

In 2013, RCN Televisión premiered the series Tres Caínes (produced by RTI Producciones), where is mentioned under the alias "Pepino".

In the series Bloque de búsqueda , produced by Teleset for Sony Pictures Television, broadcast in 2016 and inspired by the police force that disbanded the Medellín Cartel, his character was performed by the actor Sebastián Boscán, under the alias "Pinocho". 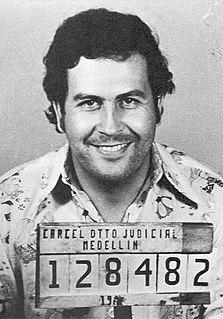 Pablo Emilio Escobar Gaviria was a Colombian drug lord and narcoterrorist who was the founder and sole leader of the Medellín Cartel. Dubbed "The King of Cocaine," Escobar is the wealthiest criminal in history, having amassed an estimated net worth of US$30 billion by the time of his death—equivalent to $64 billion as of 2021—while his drug cartel monopolized the cocaine trade into the United States in the 1980s and early 1990s.

The Medellín Cartel was a powerful and highly organized Colombian drug cartel and terrorist-type criminal organization originating in the city of Medellín, Colombia that was founded and led by Pablo Escobar. The drug cartel operated from 1972 to 1993 in Bolivia, Colombia, Panama, Central America, Peru, the United States, as well as in Canada. Although the organization started out as a smuggling network in the early 1970s, it wasn't until 1976 that the organization turned to trafficking cocaine. At the height of its operations, the Medellín Cartel smuggled multiple tons of cocaine each week into countries around the world and brought in up to US$60 million daily in drug profits. 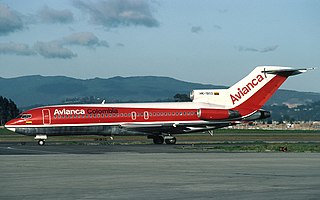 Avianca Flight 203 was a Colombian domestic passenger flight from El Dorado International Airport in Bogotá to Alfonso Bonilla Aragón International Airport in Cali, Colombia. It was destroyed by a bomb over the municipality of Soacha on November 27, 1989. All 107 people on board as well as 3 people on the ground were killed. The bombing had been ordered by the Medellín drug cartel. Luis Carlos Galán Sarmiento was a Colombian liberal politician and journalist who ran for the Presidency of Colombia on two occasions, the first time for the political movement New Liberalism that he founded in 1979. The movement was an offspring of the mainstream Colombian Liberal Party, and with mediation of former Liberal president Julio César Turbay Ayala, Galán returned to the Liberal party in 1989 and sought the nomination for the 1990 presidential election. 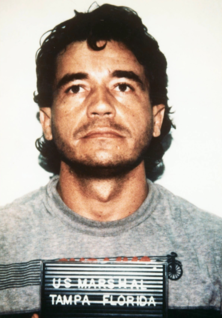 Carlos Enrique Lehder Rivas is a German-Colombian former drug lord who was co-founder of the Medellín Cartel. He was released from prison in the United States after 33 years in 2020. Born in Armenia, Colombia, Lehder eventually ran a cocaine transport empire on Norman's Cay island, 210 miles (340 km) off the Florida coast in the central Bahamas.

Dandeny Muñoz Mosquera, also known as "La Quica", is a Colombian former hitman for the Medellín Cartel, a drug trafficking group. He was described as at one point being the "chief assassin" for the Cartel's leader Pablo Escobar.

Alberto Santofimio Botero is a Colombian politician, a member of the Colombian Liberal Party. He has been Minister of Justice, a two-time presidential candidate and a Senator. He was considered to be a sure bet for president in 1982, but he decided to let his boss, Alfonso López Michelsen who had been President from 1974 to 1978, run for reelection. In the 1990s, Santofimio was involved in the campaign Process 8000 as head of the Liberal Party in Tolima Department as that party's office was accused of receiving money from companies part of an investigation in order to support the campaign for the presidency of Colombia for Ernesto Samper.

José Gonzalo Rodríguez Gacha, also known by the nickname El Mexicano, was a Colombian drug lord who was one of the leaders of the notorious Medellín Cartel along with the Ochoa Brothers and Pablo Escobar. At the height of his criminal career, Rodríguez was acknowledged as one of the world's most successful drug dealers. In 1988, Forbes magazine included him in their annual list of the world's billionaires.

Jorge Luis Ochoa Vásquez is a Colombian drug trafficker who was one of the founding members of the notorious Medellín Cartel in the late 1970s. The cartel's key members were Pablo Escobar, Carlos Lehder, José Gonzalo Rodríguez Gacha, Gustavo Gaviria, Jorge Ochoa, and his brothers Juan David and Fabio.

Rodrigo Lara Bonilla was a Colombian lawyer and politician, who served as Minister of Justice under President Belisario Betancur, and was assassinated by orders of Pablo Escobar because of his work as Minister in prosecuting cocaine traffickers mainly belonging to the Medellín Cartel.

Evaristo Porras Ardila was one of the top Colombian cocaine traffickers, and regarded as one of the leaders of the Medellín Cartel. He had strong influence in Leticia, the capital of the Amazonas region of Colombia. Porras is suspected to have been the head of the Leticia-Tabatinga cartel organized crime syndicate.

General (R) Miguel Alfredo Maza Márquez is a retired Colombian general, who was director of the Administrative Department of Security (DAS) from 1985 to 1991. 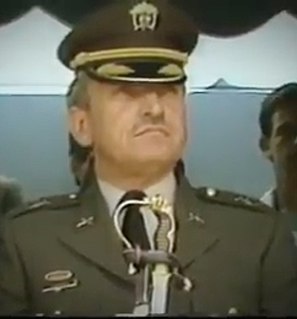 Colonel Valdemar Franklin Quintero was the commander of the Colombian National Police in Antioquia Province. Franklin had led several major raids which resulted in the seizure of multiple tons of cocaine. He was murdered by the Medellín cartel in Medellín because of these drug seizures and his refusal to talk with the cartel. He successfully thwarted an attempt to kill Luis Carlos Galán, a Colombian journalist and presidential candidate, when an RPG was launched at Galán. The cartel formally took responsibility for the slaying of the police commander by calling a series of local radio stations. The caller, who identified himself as a person from "The Extraditables", said "We, the Extraditables, claim responsibility for the murder of Col. Valdemar Franklin in response to the repression committed and the government's refusal to have a dialogue with us". Pablo Escobar, a major Colombian drug lord, had allegedly ordered the murder of Franklin on the day of the death of Luis Carlos Galán.

Escobar: El Patrón del Mal is a 2012 Colombian telenovela produced and broadcast on Caracol TV, based on a true story about the life of Pablo Escobar – the notorious druglord. It is available only in Spanish. There is a version available with English subtitles, as well as a version dubbed in Hindi on the ZEE5 app. It also aired in Arabic dub on Lana TV. It is also available in Turkish on Netflix.

La Oficina de Envigado is a drug cartel and criminal organization originally founded as an enforcement and collections arm of Pablo Escobar's Medellín Cartel. Despite being noted for its historical affiliation with drug trafficking and other organized crime activities, Oficina de Envigado's criminal activities were no longer centered on direct involvement in such activity by 2019 and are now mainly focused on providing services to lower level drug traffickers and mafia groups. It operates throughout Colombia, but mainly in the cities of Medellín and Envigado. It also controlled extortion, gambling, and money laundering businesses within the Valle de Aburrá that surrounds Medellín. It positioned itself as the chief mediator and debt collector in drug trafficking disputes and maintained major connections with the paracos and guerillas.

Jaime Ramírez Gómez was an official of the National Police of Colombia, who led a fight against the illegal drug trade in Colombia from the 1970s onwards.

Los Priscos were a criminal group affiliated with the Medellin cartel in Colombia. In the 1980s and early 1990s they participated in several assassinations in Colombia. They were often described as functioning like the ‘armed-wing of Medellin’.

Jhon Jairo Velásquez Vásquez, also known by the alias "Popeye" or "JJ", was a Colombian hitman who was part of the criminal structure of the Medellín Cartel until his surrender to the Colombian justice system in 1992. Within this structure he claimed to be a lieutenant commanding half of the sicarios.

Carlos Mauro Hoyos Jiménez was a Colombian jurist and politician. He was the general inspector of the nation from September 1987 until he was kidnapped and assassinated by hitmen under orders of Medellín Cartel.