John Leadley Dagg (1794–1884), born in Loudoun County, Virginia, lived to be over 90 years old. He died in June 1884, as one of the most respected men in American Baptist life, and remains one of the most profound thinkers produced by his denomination. [1] Dagg had a limited education, was near-blind, and physically disabled. He became a pastor in Philadelphia and elsewhere and then an educator both in Alabama and as president at Mercer University in Georgia. He was a convinced Calvinist of an evangelical kind. His Manual of Theology (1857) was the first comprehensive systematic theology written by a Baptist in America, and it became foundationally influential for Baptists in the South. 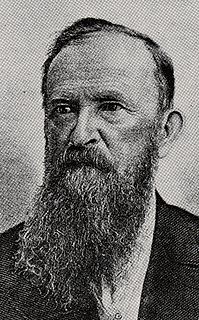 James Robinson Graves was an American Baptist preacher, publisher, evangelist, debater, author, and editor. He is most noted as the original founder of what is now the Southwestern family of companies. Graves was born in Chester, Vermont, the son of Z. C. Graves, and died in Memphis, Tennessee. His remains are interred in Elmwood Cemetery in Memphis.

Christoph Ernst Luthardt, was a conservative German Lutheran theologian, Biblical commentator and Christian apologist. He was born in Maroldsweisach, Bavaria.

Patrick Hues Mell, was born in Walthourville, Georgia, served as the President of the Southern Baptist Convention in two terms from 1863–1871 and 1880–1887, as well as served as chancellor of the University of Georgia (UGA) in Athens from 1878 until his resignation in 1888..

William Pope Harrison, D.D., L.D.D. was an American Methodist minister and theologian, and was the 48th Chaplain of the United States House of Representatives. He was an author of books on Methodist theology, most notably The Gospel among the Slaves, the first comprehensive accounting of the religious beliefs of African American slaves in the United States.

Joseph Harrison Jackson was an American pastor and the longest serving President of the National Baptist Convention, USA, Inc.

John Jay Butler was an ordained minister and theologian in the early Free Will Baptist movement in New England, serving as Professor of Systematic Theology at Cobb Divinity School at Bates College in Maine and later at Hillsdale College in Michigan.

Johnny M. Hunt is an evangelical Christian pastor, author, and former President of the Southern Baptist Convention. He was formerly the senior pastor of First Baptist Church Woodstock, in Woodstock, Georgia.

Marc H. Tanenbaum (1925–1992) was a human rights and social justice activist and rabbi. He was known for building bridges with other faith communities to advance mutual understanding and co-operation and to eliminate entrenched stereotypes, particularly ones rooted in religious teachings.

The Reverend John R. Gunn was first a Baptist pastor. During that time, starting at age 31, he authored his first of 12 books, titled At Jesus’ Feet. Then following a successful ministry he became for The Journal Gazette of Fort Wayne, Indiana a columnist whose daily messages inspired readers for over 36 years. After his death, letters to the editor requested that the columns continue, and thereafter these were reprinted daily for 15 more years. A short time later, his messages became radio scripts for the Presbyterian Church. In 1984, The Protestant Radio and Television Center of Atlanta, Georgia was awarded the Peabody Award for their Protestant Hour program, "Be Still and Know", which featured John R. Gunn's meditations. Those meditations continued for 14 years. Reverend Gunn’s work, written and audio, is still available at Day1, a ministry of The Alliance for Christian Media transitioning from Facing Life.

Dagg is a surname. Notable people with the surname include:

Robert H. "Bob" Leadley was a professional baseball manager, administrator, and team owner whose career spanned from 1884 to 1897. He was a manager in Major League Baseball for the last portion of the 1888 season with the Detroit Wolverines and for parts of the 1890 and 1891 seasons with the Cleveland Spiders. Over those three seasons, Leadley compiled a record of 76-86 and a winning percentage of .469. 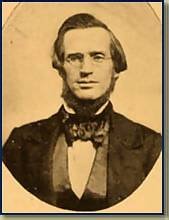 Rev. Ransom Dunn, D.D. was an American minister and theologian, prominent in the early Free Will Baptist movement in New England. He was President of Rio Grande College in Ohio, and Hillsdale College in Michigan. A Discourse on the Freedom of the Will is one of his most notable works.

George Champlin Mason Jr. (1849–1924) was an American architect who is considered the first professional architectural preservationist in the United States.

Rev. Willis Anselm Jarrel D.D. (1849-1927) was an American author, debater, Baptist minister and evangelist. He wrote a number of books and papers on the subject of Christian doctrine and Baptist Church history.

John Price Crozer was an American textile manufacturer, banker, and philanthropist from Upland, Pennsylvania. His mills produced clothing for the US Army and other customers.

Caroline Mehitable Fisher Sawyer was an American poet, biographer, and editor. Her writings ranged through a wide variety of themes.

James Merilus Simms was an African-American minister, newspaper publisher, author, and elected representative in the Georgia Assembly during the Reconstruction Era.