Maclean was born John Lean, a son of Robert Lean, of Trehudreth in the parish of Blisland in Cornwall, where he was born in 1811. His mother was Elizabeth Every, a daughter of Thomas Every, of Bodmin, Cornwall. After genealogical research his ancestors were connected to the Scottish Clan Maclean, and in 1845, with his brothers, he added to his surname the prefix "Mac".

In 1837 he entered the Ordnance Department of the War Office, and became deputy auditor in April, 1865. He resigned this post on a pension, and received a knighthood in January, 1871. Sir John Maclean died at his residence, Glasbury House, Richmond Hill, Clifton, Bristol, of influenza. on Tuesday 5 March 1895. [2]

In 1835 at Helland in Cornwall, he married Mary Billing, eldest sister and co-heiress of Thomas Billing, of Lanke, Cornwall. [3]

Sir John's Parochial History of the Deanery of Trigg Minor (1872–1879) in 3 volumes is the most detailed work of parochial history which deals with Cornwall (the deanery of Trigg Minor consisted of 20 parishes at the time he wrote). It was published in parts intended for binding as three volumes: [4] there was also a separate edition of the part on Blisland. He was the author of several other historical works, including Life and Times of Sir Peter Carew , Letters of Sir Robert Cecil to Sir George Carew , and Memoir of the Family of Poyntz, [2] (of Iron Acton, Gloucestershire). 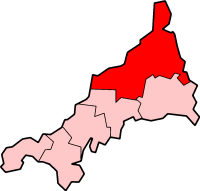 North Cornwall is an area of Cornwall, England, United Kingdom. It is also the name of a former local government district, which was administered from Bodmin and Wadebridge 50.516°N 4.835°W. Other towns in the area are Launceston, Bude, Padstow, and Camelford.

The hundred of Trigg was one of ten ancient administrative shires of Cornwall—see "Hundreds of Cornwall". 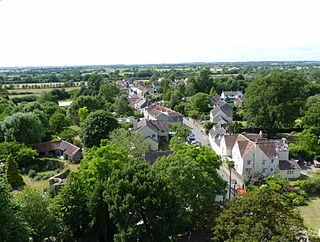 Iron Acton is a village, civil parish and former manor in South Gloucestershire, England. The village is about 2 miles (3 km) west of Yate and about 9 miles (14 km) northeast of the centre of Bristol. The B4058 road used to pass through the village but now by-passes it just to the north.

Advent is a civil parish on the north-western edge of Bodmin Moor in north Cornwall, England. The English name St Adwenna derives from the Cornish Adhwynn and lies in the Registration District of Camelford.

St Clether is a civil parish and village in Cornwall, England, United Kingdom. The village is situated on the east flank of Bodmin Moor approximately eight miles (13 km) west of Launceston in the valley of the River Inny. The population of the civil parish at the 2011 census was 156.

Helland is a civil parish and village in Cornwall, England, United Kingdom. It is situated 2+1⁄2 miles (4.0 km) north of Bodmin. The meaning of the name Helland is unclear: it is possible that the origin is in Cornish hen & lan. The original dedication of the church is unknown but St Helena is now recognised as the patron.

Humphrey Arundell of Helland in Cornwall, was the leader of Cornish forces in the Prayer Book Rebellion early in the reign of King Edward VI. He was executed at Tyburn, London after the rebellion had been defeated.

Michaelstow is a civil parish and village in north Cornwall, England, United Kingdom. The village is about three miles (4.8 km) south of Camelford. The hamlets of Fentonadle, Trevenning and Treveighan are in the parish. 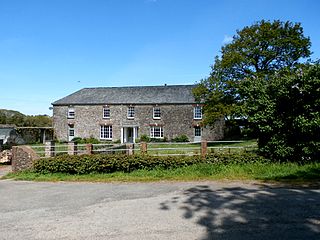 Sir William Huddesfield of Shillingford St George in Devon, was Attorney General for England and Wales to Kings Edward IV (1461–1483) and Henry VII (1485–1509). He built the tower of St George's Church, Shillingford.

Bableigh is an historic estate in the parish of Parkham in North Devon, England. It is separated from the village of Parkham by the Bableigh Brook. It was the earliest recorded seat of the Risdon family in Devonshire, from which was descended the Devon historian Tristram Risdon.

Brutus Browne, of Brown's Hillash, in the parish of Langtree, Devon, was an English naval officer who fought against the Spanish Armada of 1588 and was a Member of Parliament for Bodmin, Cornwall, in 1586-7.