Tradition holds that John Manley was born in 1733 near Torquay, Devon. As a young man, he settled in Marblehead, Province of Massachusett Bay, eventually becoming the captain of a merchant vessel there. [1] For reasons apparently lost to history, Manley went by the name of John Russell during his time spent in Marblehead, where he married Martha Russell (née Hickman) on September 27, 1764, and by whom he had at least two sons and three daughters. According to his descendants, the reason for two different last names is because he was the illegitimate child of his mother Elizabeth Manley and the Duke of Bedford whose last name was Russell. Outside of Marblehead, John continued to use the surname Manley. [1] [2] Modern fiction writer James L. Nelson acknowledges the above accounts, but suggests that they were "made up", and that in actuality Manley was likely born and raised in Boston, Massachusetts, where he later became a merchant sea captain and married Hannah Cheevers in 1763, by which he had one surviving son John. [3] All of the sources place Manley in Boston by 1775 after his services were enlisted for the nascent Continental Navy. It is reported that he also hunted with the Washingtons and gave them land as the Manley family was very wealthy.

Manley was appointed captain of the schooner Lee by George Washington on 17 October 1775. He assumed command on 24 October 1775 with a crew of 50 men from John Glover's Marblehead Regiment, [1] and on 9 November, Manley sailed from Marblehead flying the new pine tree flag from the main truck. [4] Sources differ as to Manley's first prize, either recapturing a small Continental schooner [4] [5] or capturing the British sloop Polly, [6] but on 28 November, he captured one of the most valuable prizes of the American Revolutionary War—the British brigantine Nancy carrying much ordnance and military stores for British troops in Boston that proved invaluable to George Washington's army. While not the first British vessel to surrender to the continental fleet, Nancy was perhaps the first capture of significant consequence, [7] leading John Adams to later remark "I assert that the first American flag was hoisted by John Manley, and the first British flag was struck to him". [5] Through the end of 1775, Manley captured several additional prizes carrying cargoes of food, rum, coal, dry goods, all badly needed by the Continental forces.

In January 1776, for his "great vigilance and industry," Manley was appointed commodore of "George Washington's fleet", a group of small armed ships fitted out by him to harass the British and to seize supply vessels. The fleet was led by two frigates, Hancock and Boston. [8]

On May 21, 1777 Manley's ships evaded the British blockade of the town of Boston and set sail for Newfoundland. A large British fleet was at anchor in nearby New York, but there was no pursuit as all British vessels were engaged in supporting troops stationed on shore. On June 7, Manley's ships encountered and defeated the 28-gun Royal Navy frigate HMS Fox in a brief engagement off the Grand Banks. Three weeks later they turned for the New England coast, in the hope of finding further British targets. [8]

By early July, Manley's fleet had made landfall off Nova Scotia. On July 7 they were discovered by a small force of two British frigates and a brig, who opened fire. After a running battle lasting 39 hours, the British succeeded in capturing both Hancock and Boston, and retaking Fox. [8] Manley and his crew were imprisoned in New York until March 1778. Upon his release, Manley entered privateer service to command Marlborough, Cumberland, and a prize, Jason, [9] until 1782, except for two more periods of imprisonment, one for two years in Mill Prison, England. His privateer ship Jason was a small ship of 18 guns owned by Mungo Mackay and others. [10] In November 1779, the ship fell in with the frigate Perseus and 18 were killed and 12 wounded on Jason, while 7 killed and several were wounded on the Perseus. [11]

On 11 September 1782, he returned to the Navy with command of frigate Hague. On a West Indies voyage, he made a spectacular escape from a superior naval force and, in January 1783, took the last significant prize of the war, Baille. Regarded as one of the outstanding captains of the young Navy, he had captured 10 prizes singlehandedly and participated in the seizure of five others.

Three ships have been named USS Manley for him.

The American Revolutionary War saw a series battles involving naval forces of the British Royal Navy and the Continental Navy from 1775, and of the French Navy from 1778 onwards. While the British enjoyed more numerical victories these battles culminated in the surrender of the British Army force of Lieutenant-General Earl Charles Cornwallis, an event that led directly to the beginning of serious peace negotiations and the eventual end of the war. From the start of the hostilities, the British North American station under Vice-Admiral Samuel Graves blockaded the major colonial ports and carried raids against patriot communities. Colonial forces could do little to stop these developments due to British naval supremacy. In 1777, colonial privateers made raids into British waters capturing merchant ships, which they took into French and Spanish ports, although both were officially neutral. Seeking to challenge Britain, France signed two treaties with America in February 1778, but stopped short of declaring war on Britain. The risk of a French invasion forced the British to concentrate its forces in the English Channel, leaving its forces in North America vulnerable to attacks.

The first USS Franklin was a schooner in the Continental Navy during the American Revolutionary War. She was named for Benjamin Franklin. 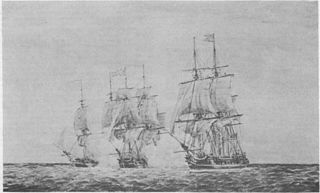 The Pennsylvania Navy served as the naval force of Pennsylvania during the American Revolution and afterward, until the formation of the United States Navy. The navy's vessels served almost exclusively on the Delaware River, and were active in first defending the approaches to the city of Philadelphia during the British campaign that successfully occupied the city in 1777, and then preventing the Royal Navy from resupplying the occupying army.

The 14th Continental Regiment, also known as the Marblehead Regiment and Glover's Regiment, was raised as a Massachusetts militia regiment in 1775, and taken into the Continental Army establishment during the summer of 1775. When the Continental Army was reestablished for 1776, the regiment was redesignated the 14th Continental. Composed of seafaring men from the area around Marblehead, Massachusetts, it manned the boats during the New York and New Jersey campaign of 1776 and the crossing of the Delaware River before and after the Battle of Trenton. The men of the regiment were only enlisted for one and a half years, and the regiment was disbanded on December 31, 1776, in eastern Pennsylvania. 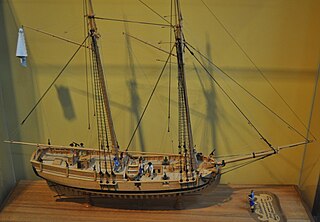 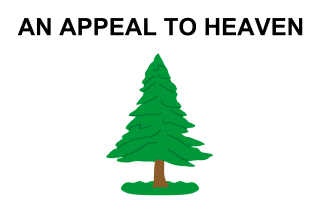 The Massachusetts Naval Militia, was a naval militia active during the American Revolutionary War. It was founded December 29, 1775, to defend the interests of Massachusetts during the war.

William Day was a Springfield, Massachusetts, sea captain who acted against America's enemies in both the French and Indian War and the American Revolutionary War. In 1777 he received the first gun salute to an American fighting vessel in a European port.

USS Harrison (1761) was a schooner chartered and outfitted by General George Washington during the American Revolution. She was assigned to capture British supply ships as part of Washington’s plans for the siege of Boston, Massachusetts, and to provide the Continental Army with whatever goods they carried. 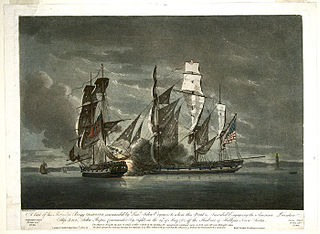