John Nichols (2 February 1745 – 26 November 1826) was an English printer, author and antiquary. [1] He is remembered as an influential editor of the Gentleman's Magazine for nearly 40 years; author of a monumental county history of Leicestershire; author of two compendia of biographical material relating to his literary contemporaries; and as one of the agents behind the first complete publication of Domesday Book in 1783.

He was born in Islington, London to Edward Nichols and Anne Wilmot. On 22 June 1766 he married Anne, daughter of William Cradock. Anne bore him three children: Anne (1767), Sarah (1769), and William Bowyer (born 1775 and died a year later). His wife Anne also died in 1776. Nichols was married a second time in 1778, to Martha Green who bore him eight children. Nichols was taken for training by "the learned printer", William Bowyer the Younger in early 1757. [2] Nichols was formally apprenticed in February 1759 by Bowyer, whom he eventually succeeded. [2] On the death of his friend and master in 1777 he published a brief memoir, which afterwards grew into the Anecdotes of William Bowyer and his Literary Friends (1782). 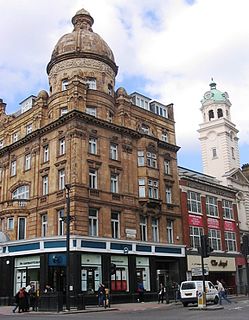 William Bowyer was an English printer.

In 1788, he became editor of the Gentleman's Magazine and remained so till his death. In that periodical, and in his numerous volumes of Anecdotes and Illustrations, he made numerous contributions to literary biography. As his materials accumulated he compiled a sort of anecdotal literary history of the century, based on a large collection of letters. The Literary Anecdotes of the Eighteenth Century (1812–15, nine volumes), into which the original work was expanded, forms only a small part of Nichols's production.

Considered one of his most important works, Nichols's monumental History and Antiquities of the County of Leicester, was the most ambitious of the antiquarian county histories (extremely long, but the quality of the content is very variable), a massive compendium of historical notes, manuscripts and engraved plates printed by subscription after an exhaustive survey of the county, and published in eight parts not in chronological order to make up four volumes when complete, from 1795–1815. [3] It was followed by the Illustrations of the Literary History of the Eighteenth Century, consisting of Authentic Memoirs and Original Letters of Eminent Persons, which was begun in 1817 and completed by his son John Bowyer Nichols (1779–1863) in 1858. The Anecdotes and the Illustrations are mines of valuable information on the authors, printers and booksellers of the time.

Nichols co-operated with Abraham Farley in the production of the 1783 edition of Domesday Book, which he called in his Literary Anecdotes "the most invaluable as well as most antient Record in this or any other kingdom". [4] Between Farley's appointment as co-editor of the project in 1770 and the final publication of Domesday Book in two volumes in 1783, Nichols assisted Farley in printing and proof-reading the text, and also designed the special "record type" typeface that was to be used. This was a source of lasting pride to him; he would later say "on the correctness and the beauty of this important Work I am content to stake my typographical credit". [5]

Abraham Farley (?1712–1791) was a lifelong civil servant, who was appointed deputy chamberlain of the Exchequer in 1736, and soon became involved with the public records at the Chapter House of Westminster Abbey. First amongst these was Domesday Book, of which Farley became custodian, granting visiting antiquaries access to the Book and making transcripts for a fee. In 1753 he was approached by Philip Carteret Webb to make a transcript from Domesday Book; this he did, and, perhaps in return for Webb’s help in raising awareness of Domesday’s importance, waived the usual fee – two years later Webb’s paper on the Book was read to the Society of Antiquaries of London. 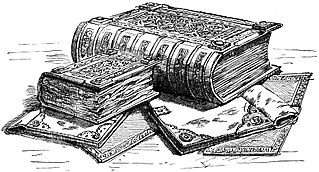 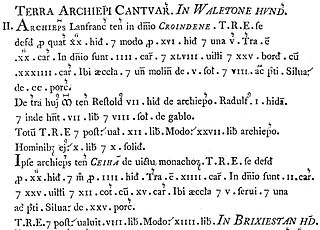 Record type is a family of typefaces designed to allow medieval manuscripts to be published as near-facsimiles of the originals. The typefaces include many special characters intended to replicate the various scribal abbreviations and other unusual glyphs typically found in such manuscripts. They were used in the publication of archival texts between 1774 and 1900.

The types created by Nichols for the Domesday project were destroyed, alongside much else of value, in a fire at his office in February 1808. [6]

Nichols was a fellow of the Society of Antiquaries, a trustee of many City of London institutions, and in 1804 he was master of the Stationers' Company.

John Bowyer Nichols continued his father's various undertakings, and wrote, with other works, A Brief Account of the Guildhall of the City of London (1819).

John Gough Nichols (1806–73), John Bowyer Nichols' eldest son, was also a printer and a distinguished antiquary. He edited the Gentleman's Magazine from 1851 to 1856 and The Herald and Genealogist from 1863 to 1874, and was one of the founders of the Camden Society. [7]

It is also understood that William Higton was given the middle name 'Nichols' by his father, the Artist John Higton, in honour of their friendship, and that Nichols was his godfather.

A full "Memoir of John Nichols" by Alexander Chalmers is contained in the Illustrations, and a bibliography in the Anecdotes (vol. vi.) is supplemented in the later work. See also Robert Cradock Nichols, Memoir of the late John Gough Nichols, F.S.A. (1874).

Thomas Martin, known as "Honest Tom Martin of Palgrave", was an antiquarian and lawyer.

Jacob Schnebbelie (1760–1792) was an English draughtsman, specialising in monuments and other historical subjects.

Myles Davies was a Welsh author. He published the Athenae Britannicae in 1716.

James Peller Malcolm (1767–1815) was an American-English topographer and engraver.

John Cade (1734–1806) was an English tradesman and antiquary. Retiring from business, he took up the study of Roman remains around County Durham, putting forward hypotheses of reconstruction of Roman roads, in particular, that were controversial.

John Wheble was an English printer, author and antiquary.

John Stockdale Hardy (1793–1849) was an English legal practitioner known as an antiquary.

Stebbing Shaw (1762–1802) was an English cleric, local historian and topographer.

Robert Blemmell Schnebbelie was an English painter and illustrator. He produced numerous paintings and drawings of London's topography during the first half of the 19th century. He was born in Canterbury in 1781 as the second son of Jacob Schnebbelie, a confectioner who later became a noted antiquarian draughtsman employed by the Society of Antiquaries of London. 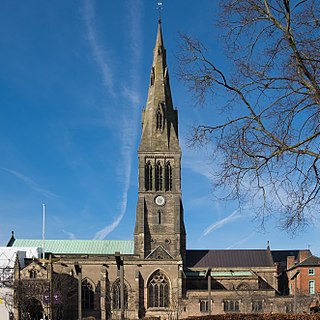