Father Idzi Radziszewski founded the university in 1918. Vladimir Lenin allowed the priest to take the library and equipment of the Saint Petersburg Roman Catholic Theological Academy to Poland to launch the university just as Poland regained its independence. [1]

The aim of the university was to be a modern place of higher education that would conduct research in the spirit of harmony between science and faith. The university sought to produce a new Catholic intelligentsia that would play a leading role in .[ citation needed ]

The number of students increased from 399 in 1918–1919 to 1440 in 1937–1938.[ citation needed ] This growth was interrupted by the outbreak of the Second World War and Nazi Germany's occupation of Poland. Of all the universities located in the German-occupied territory, the University of Lublin was the only one to resume work in October 1939. On 23 November 1939, the Nazis executed a number of academic workers, among others, professors Michał Niechaj and Czesław Martyniak. [2]

The university was ordered shut down and its buildings were converted into a military hospital. [3] Nevertheless, the university carried on its teaching activities in secret. After the invasion of Lublin in July 1944 by the Red Army, the university reopened on 21 August 1944.[ citation needed ]

Since then the university has functioned without interruption. The university stayed open during the years Poland was under Communist control between 1944 and 1989, though some of its faculties did not. The faculties of law, social science and education were shut down between 1953 and 1956. [1] It was the only independent, Catholic university in existence in the entire Soviet bloc. Given that the Communist governments all insisted on having a total monopoly of control over educational institutions, the preservation of its independence was a great achievement. [4]

The university was often harassed in various ways by the Communist authorities, especially in the 1950s and the 1960s. The university faculty were under frequent surveillance by the secret police. Periodically some faculties were denied by the state the right to grant graduate degrees. The employment prospects of its graduates were limited.[ citation needed ]

Despite the difficulties, the university's independence was maintained and it never adopted Marxist dogmas taught at all the other state universities. It served as a haven for students who were expelled from state universities for political reasons. [4]

After the fall of Communism in Poland in 1989, the university has flourished, quadrupling its student population and greatly expanding its campus. In 2010 the university was involved in a scandal concerning the granting of PhDs by departments that were not allowed to grant them, due to not having a sufficient number of academic staff. [5]

The Institute of English Studies at the John Paul II Catholic University of Lublin offers courses connected with Celtic cultures and languages as part of BA and MA courses in the Department of Celtic Studies. The Department was founded in 1989.

A student of Celtic Studies can choose between courses in Old English, Celtic History and Culture, Celtic Linguistics, and Irish and Welsh Literatures. BA students may opt for learning Irish and Welsh. There are also Celtic Days that have been taking place since 2004. The event has two parts, namely the academic (lectures, presentations, language workshops), and the artistic one (dance workshops, concerts).

In 2011–12, the university's philosophy program was ranked first in Poland by the Polish Accreditation Agency, distinguished twice, receiving 9 million PLN total in grants that year as a result.[ citation needed ] 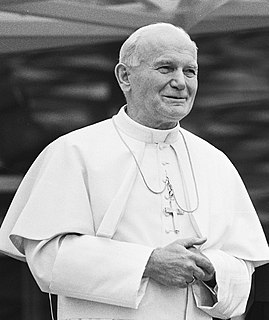 Stanisław Jan Dziwisz is a Polish prelate of the Catholic Church. He served as Archbishop of Kraków from 2005 until 2016. He was created a cardinal in 2006. He was a long-time and influential aide to Pope John Paul II, a friend of Pope Benedict XVI, and an ardent supporter of John Paul II's beatification.

Prince Adam Stefan Stanisław Bonifacy Józef Sapieha was a Polish cardinal of the Roman Catholic Church who served as Archbishop of Kraków from 1911 to 1951. Between 1922–1923 he was a senator of the Second Polish Republic. In 1946, Pope Pius XII created him Cardinal.

Blessed Stefan Wyszyński was a Polish prelate of the Catholic Church. He served as the bishop of Lublin from 1946 to 1948, archbishop of Warsaw and archbishop of Gniezno from 1948 to 1981. He was created a cardinal on 12 January 1953 by Pope Pius XII. He assumed the title of Primate of Poland.

Marian Franciszek Jaworski was a Cardinal Priest and Archbishop of Lviv of the Latins in the Roman Catholic Church. He was a close friend of Pope John Paul II.

Stanisław Kazimierz Nagy, SCI was a Polish member of the Priests of the Sacred Heart of Jesus (Dehonians) and a Cardinal. He was born in 1921 in Bieruń, Silesia, Poland, to a Hungarian father and Polish mother. In 1937 he became a member of the Dehonian Congregation and was ordained a priest in 1945. He was a rector in Kraków-Płaszów, in Tarnów and a professor at the Catholic University of Lublin. 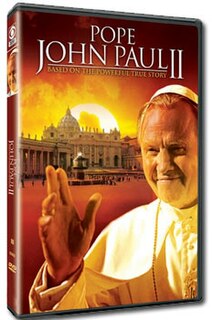 Stanisław Wojciech Wielgus is a Polish prelate of the Catholic Church, who resigned his position as Archbishop of Warsaw on 6 January 2007, just one day after being installed in that post in a private ceremony, just before the start of his public installation, because of revelations that he cooperated with the Polish communist secret police decades earlier. He was Bishop of Płock from 1999 to 2007. 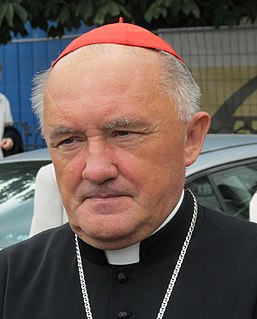 Kazimierz Nycz is a Polish prelate of the Catholic Church who has been the Archbishop of Warsaw since 2007. He was Bishop of Koszalin-Kołobrzeg from 2004 to 2007, after serving more than fifteen years as auxiliary bishop of Warsaw. Pope Benedict XVI elevated him to the rank of cardinal in 2010.

Bolesław Kominek was a Polish cardinal of the Roman Catholic Church. He served as Archbishop of Wrocław from 1972 until his death, and was elevated to the cardinalate in 1973.

The early life of Pope John Paul II covers the period in his life from his birth in 1920 to his ordination to the priesthood in 1946.

Niegowić is a village in the administrative district of Gmina Gdów, within Wieliczka County, Lesser Poland Voivodeship, in southern Poland. It lies approximately 13 kilometres (8 mi) south-east of Wieliczka and 25 km (16 mi) south-east of the regional capital Kraków.

Tadeusz Bohdan Isakowicz-Zaleski is a Polish Roman Catholic and Armenian Catholic priest, author and activist. Born in 1956, in Kraków, Isakowicz-Zaleski was an activist of the anticommunist student opposition in Kraków in the late 1970s, became a Solidarity chaplain in Kraków's Nowa Huta district in the 1980s, and later an avid supporter of the lustration of the Polish Church. On 3 May 2006, he was awarded the Commander's Cross of the Order of Polonia Restituta, one of Poland's highest orders. Subsequently in 2007, he was awarded the Order of the Smile and Polish Ombudsmans Order of Paweł Włodkowic.

Władysław Bukowiński, was a Polish Roman Catholic priest who served in the diocese of Karaganda in Kazakhstan. He served in Poland during World War II and became renowned among his parishioners for his calmness and his intelligence. He made an effort to meet the conflict with the love of Jesus Christ and the message of the Gospel. He was arrested on several occasions and was a prisoner for a time in a Soviet gulag. After he was released, he served a long-term mission in Kazakhstan.

Bishop Paweł Socha, C.M. is a Polish Roman Catholic prelate, who served as an Auxiliary bishop of the Roman Catholic Diocese of Zielona Góra-Gorzów and the Titular Bishop of Thunigaba since 20 November 1973 until his retirement on 16 January 2012.

Halina Kwiatkowska was a Polish actress, educator, and writer. She performed in The Cherry Orchard at the National Stary Theatre in Kraków, and starred in the films Ashes and Diamonds, The Doll, and And Along Come Tourists.