His paternal grandparents were James Stewart,5th Earl of Galloway and Catherine (née Montgomerie),a daughter of Alexander Montgomerie,9th Earl of Eglinton. His mother was the youngest daughter of John Cochrane,4th Earl of Dundonald. [1]

He was elected one of the representative peers,representing the Peerage of Scotland in the House of Lords,in 1774 and sat there until the 1790s. [2] From 1783 until his death he was a Lord of the Bedchamber to King George III.

The Earl,a Tory,was the target of two hostile poems by Robert Burns,John Bushby's Lamentation and On the Earl of Galloway. [3] [4]

Galloway,a frequent opera-goer,was caricatured by James Gillray in An Old Encore at the Opera! of 1803. [2] In 1762,James Boswell wrote of him that he had "a petulant forwardness that cannot fail to disgust people of sense and delicacy". [5]

The Earl of Galloway was painted in a miniature by Nathaniel Hone the Elder, [7] as well as a full portrait by Anton Raphael Mengs in 1758 when he was Viscount Garlies,which is currently located at The Los Angeles County Museum of Art. [8]

His second wife,Anne Dashwood,had a portrait painted of her by Sir Joshua Reynolds in 1764. The portrait of Anne is currently located at The Metropolitan Museum of Art in New York City. [9] Lady Galloway,along with their daughter Susan Stewart,later Duchess of Marlborough,was also painted by Angelica Kauffmann. [10]

After his first wife's early death,he remarried to Anne Dashwood (1743–1830),daughter of Sir James Dashwood,2nd Baronet,on 13 June 1764. Together,John and Anne were the parents of sixteen children: [1]

His grandson,Randolph Stewart (1800–1873),was the 9th Earl of Galloway and served as Lord Lieutenant of Kirkcudbright from 1828 to 1845 and was MP for Cockermouth from 1826 to 1831. He married Lady Harriet Blanche Somerset,daughter of Henry Somerset,6th Duke of Beaufort. [1]

His grandson,George Rushout (1811–1887),was the 3rd Baron Northwick and served as MP for Evesham from 1837 to 1841 and MP for Worcestershire East from 1847 to 1859. He married the Hon. Elizabeth Augusta,daughter of William Bateman-Hanbury,1st Baron Bateman and widow of George Drought Warburton,in 1869. [1]

Earl of Galloway is a title in the Peerage of Scotland. It was created in 1623 for Alexander Stewart,1st Lord Garlies,with remainder to his heirs male bearing the name and arms of Stewart. He had already been created Lord Garlies in the Peerage of Scotland in 1607,with remainder to the heirs male of his body succeeding to the estates of Garlies. This branch of the Stewart family were distant relatives of the Stewart Kings of Scotland.

George Howard,6th Earl of Carlisle of Castle Howard,,styled Viscount Morpeth until 1825,was a British statesman. He served as Lord Privy Seal between 1827 and 1828 and in 1834 and was a member of Lord Grey's Whig government as Minister without Portfolio between 1830 and 1834. 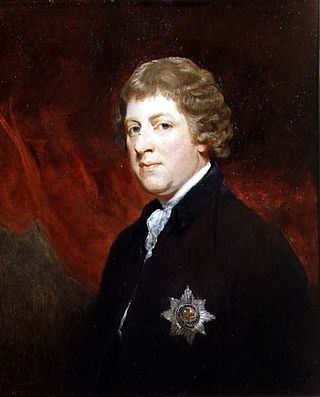 Granville Leveson-Gower,1st Marquess of Stafford,KG PC,known as Viscount Trentham from 1746 to 1754 and as The Earl Gower from 1754 to 1786,was a British politician from the Leveson-Gower family.

George Bussy Villiers,4th Earl of Jersey,PC was an English nobleman,peer,politician and courtier at the court of George III.

Alexander Stewart,6th Earl of Galloway was a Scottish aristocrat.

George Gordon,9th Marquess of Huntly,,styled Lord Strathavon until 1795 and known as The Earl of Aboyne from 1795 to 1836,was a Scottish peer. 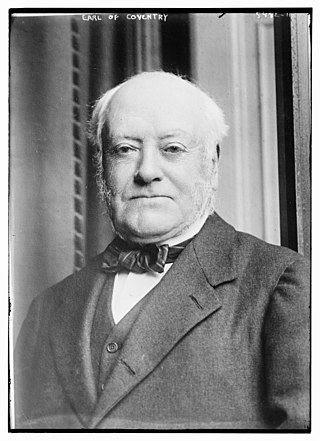 James Edward Harris,2nd Earl of Malmesbury was a British peer,styled Viscount FitzHarris from 1800 to 1820.

John Rushout,1st Baron Northwick was a British politician and Member of Parliament (MP) for Evesham. 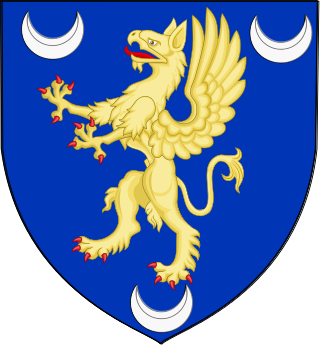 Edward Bligh,5th Earl of Darnley,FRS,styled Lord Clifton until 1831,lord of the Manor of Cobham,Kent,was a British peer and politician.

Admiral George Stewart,8th Earl of Galloway,,styled Lord Garlies between 1773 and 1806,was a British naval commander and politician.

John Bligh,3rd Earl of Darnley,styled The Hon. John Bligh between 1721 and 1747,lord of the Manor of Cobham,Kent,was a British parliamentarian.

Elizabeth Greville,Countess of Warwick,formerly Elizabeth Hamilton,was the wife of Francis Greville,1st Earl of Warwick,who was restored to the earldom of Warwick by King George III of the United Kingdom in 1760.

Thomas Cherburgh Bligh was an Anglo-Irish Whig politician who served in the Irish House of Commons and the Parliament of Great Britain.