John Still (c. 1543 – 26 February 1607/1608) was Master of two Cambridge colleges and then, from 1593, Bishop of Bath and Wells. He enjoyed considerable fame as an English preacher and disputant. [1] He was formerly reputed to be the author of an early English comedy drama, Gammer Gurton's Needle.

Still was appointed in 1570 to be Lady Margaret's Professor of Divinity, and later held livings in Suffolk, where he was Archdeacon of Sudbury from 1576 to 1593, and in Yorkshire. He was then Master successively of St John's College (1574) and of Trinity College (1577). Still was Vice-Chancellor of his university in 1575/1576 and again in 1592/1593. He was raised to the bishopric of Bath and Wells in 1593. In 1604 he bought the manor of Hutton, Somerset, east of Wells and to the west of the Mendip Hills, with its residence, Hutton Court.

John Still died on 26 February 1608, leaving a large fortune from lead mines discovered in the Mendips. There is a fine monument to him in the north transept of Wells Cathedral, erected by his son Nathaniel.

Wells Cathedral has a large canopied tomb with a recumbent effigy of the Bishop, situated against the east wall of the chapel between the north aisle and the Chapter House. It was repainted in the 19th century. It bears a Latin inscription: [9]

("Sacred to the memory of John Still, Bishop of Bath and Wells, Doctor of Theology, keenest warrior for Christian Virtue famed no less in integrity of life than for True Doctrine, who, when he had long kept vigil with the Lord, went to sleep in Christ on the 26th day of February 1607 in the certain hope of rising again. He lived for 64 years, sat as Bishop for 16. Nathaniel Still first-born son mourning the best father thus placed it of piety")

Above it are three escutcheons, left to right: Azure, a saltire per saltire and per cross counter changed argent and or (See of Wells); the same, impaling Still; Still, alone.

There exists also a stone memorial to Nathaniel Still (died 1626), son of Bishop Still. Nathaniel kneels at prayer to the left, in front of his own son, who predeceased him. Kneeling opposite is his wife, Jane Whitmore, in front of their daughters. Below is a text alluding to the Bishop, who "first raised the name" (of Still):

"In memory of Nathanill Still of this parrish Esq., who dyed the second day of February Anno Domini 1626. Not that he needeth monuments of stone for his well-gotten fame to rest uppon but this was reard to testifie that hee lives in theire loves ye yet surviving for unto vertu who first raised his name hee left the preservation of the same and to posterity remaine it shall when brass and marble monuments shall fall"

Gammer Gurton's Needle is the second earliest extant English comedy, properly so called. [10] Still, whose reputation as a serious churchman cannot easily be reconciled with the buffoonery in A Ryght Pithy, Pleasaunt and merie Comedie: Intytuled Gammer Gurtons Nedle, was first credited with its authorship by Isaac Reed in his 1782 edition of Biographia dramatica. The title-page of the piece, which was printed by Thomas Colwell in 1575, states that it was played not long before at Christ's College, Cambridge, and was "made by Mr S. Mr of Art." A play was acted at Christmas 1567, and Still was identified as being the only MA on the register at that time whose name began with S.

There are reasons to suppose, however, that the play had been in Colwell's hands some time before it was printed, and it may well be identical with the Dyccon of Bedlam for which he took out a licence in 1562–1563, "Diccon the Bedlem" being first in the dramatis personae of Gammer Gurton. The accounts of Christ's College for 1559–1560 include the entry, "Spent at Mr Stevenson's plaie, 5s."

Contemporary Puritan writers in the Marprelate tracts allude to Dr John Bridges, Dean of Salisbury, author of A Defence of the Government of the Church of England, as the reputed author of Gammer Gurton's Needle, but he obviously could not be properly described as "Mr. S". Dr Bridges took his MA degree at Pembroke College, Cambridge, in 1560. The wit and periodic coarseness of his acknowledged work makes it reasonable to suppose he may have been a coadjutor of the author.

In the light of the authorship discussion, Gammer Gurton's Needle is thought to date from about 1553. Though less overt in its use of Latin comedic conventions than its contemporary Ralph Roister Doister , several scholars have noted the play's parodic treatment of Terentian comedy. The plot centres on the loss of a needle belonging to Gammer Gurton. This is eventually found when her servant, Hodge, is slapped on the buttocks by the trickster Diccon and discovers it in the seat of his breeches. 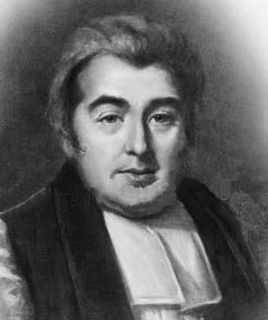 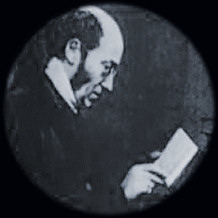 William John Thoms was a British writer credited with coining the term "folklore" in 1846. Thoms's investigation of folklore and myth led to a later career of debunking longevity myths, and he was a pioneer demographer. 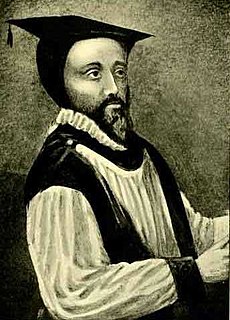 Richard Carpenter (1575–1627) was an English clergyman and theological writer. 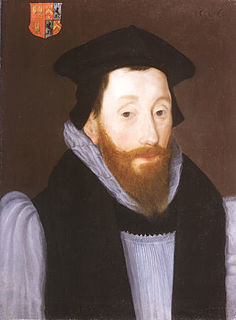 George Lloyd was born in Wales, and became Bishop of Sodor and Man, then Bishop of Chester. He is remembered for Bishop Lloyd's House in Chester, which he had built in the years before his death, and which is recorded in the National Heritage List for England as a designated Grade I listed building. 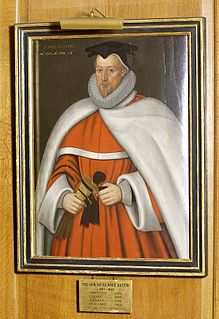 Sir Richard Hutton was a Yorkshire landowner, and judge. He defied Charles I over ship money. 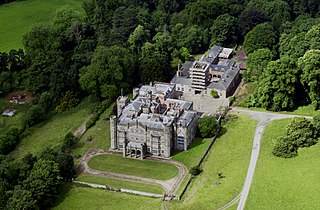 Apley Hall is an English Gothic Revival house located in the parish of Stockton near Bridgnorth, Shropshire. The building was completed in 1811 with adjoining property of 180 acres (0.73 km2) of private parkland beside the River Severn. It was once home to the Whitmore & Foster families. The Hall is a Grade II* listed building claimed as one of the largest in the county of Shropshire. 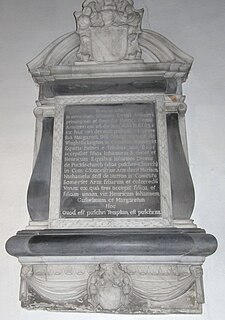 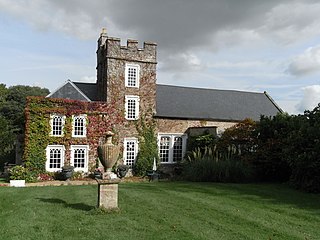 Hutton Court is a country house at Hutton, Somerset, England, built in the 15th century as a manor house. It is Grade II* listed on the National Heritage List for England. In addition to the main house, the boundary wall, summerhouse and the gates and piers to the hall are all separately Grade II listed. and stands immediately to the south of the parish church.

Sir William Whitmore was an English landowner and politician who sat in the House of Commons at various times between 1621 and 1626. 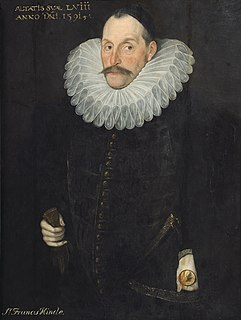 Sir Francis Hynde, of Madingley, Cambridgeshire and Aldgate, London, was an English politician and landowner particularly associated with the development of Madingley Hall and its manorial estates.

Breide Rantzau was a German nobleman in Danish-Norwegian service. He served as stadtholder of Copenhagen from 1602.