John Story (or Storey) (1504 – 1 June 1571) was an English Roman Catholic martyr and Member of Parliament. Story escaped to Flanders in 1563, but seven years later he was lured aboard a boat in Antwerp and abducted to England, where he was imprisoned in the Tower of London, and subsequently executed at Tyburn on a charge of treason.

He was born in 1504, the son of Nicholas and Joan Story of Salisbury. He became a Franciscan tertiary. Story was educated at Hinxsey Hall, University of Oxford, where he became lecturer on civil law in 1535, and two years later became principal of Broadgates Hall, afterwards Pembroke College. [1] He received his D.C.L. in 1538, and the following year resigned his position at Broadgates and was admitted as an advocate at Doctors' Commons. He married Joan Watts.

He appears to have temporarily abjured his Roman Catholic beliefs and took the Oath of Supremacy. In 1544, in recognition of legal services performed in Boulogne for the crown, King Henry VIII confirmed Story in the position of Regius Professor of civil law at Oxford. Having been chosen Member of Parliament for Salisbury in 1545 and Hindon in Wiltshire. Just after the accession of King Edward VI in 1547, Story gained notoriety by his opposition to the Act of Uniformity in 1548. For crying out "Woe unto thee, O land, when thy king is a child," Story was imprisoned by the House of Commons, but he was soon released and went into exile [2] with his family to Louvain, where he became a member of the University.

After the accession of Queen Mary he returned to England in August 1553. His patent as Regius Professor was renewed but he resigned his interest in his position at Oxford, and was made chancellor of the dioceses of London and of Oxford and dean of arches. Queen Mary being now on the throne, Story was one of the officials in prosecuting heresy, and one of her proctors at the trial of Thomas Cranmer at Oxford in 1555. [2]

Under Queen Elizabeth, he was again returned to Parliament (as member for East Grinstead in 1553, Bramber in April 1554, Bath in November 1554, Ludgershall in 1555 and Downton in 1559). [3] On 20 May 1560, he underwent a short imprisonment in the Fleet for "having obstinately refused attendance on public worship, and everywhere declaiming and railing against that religion we now profess." [4]

In 1563, he was again arrested and committed to the Marshalsea, but managed to escape to Flanders, where he became a pensioner of King Philip II, and acted as the King's almoner for the Catholic exiles. Engaged by the Duke of Alba (Alva in Dutch), Governor of the Spanish Netherlands, to prevent the export of heretical books from the Netherlands to England, he was lured onto a trading boat at Antwerp in 1570 and conveyed to Yarmouth [2] and thence to imprisonment in the Tower of London. According to Bede Camm, Story represented the old order, and was well known among the Catholic refugees. Brought home by fraud and violence and then executed, Camm sees this as meant to send a message to the exiles, demonstrating "how strong Elizabeth was to punish and how powerless Spain to protect". [5]

In spite of his claim that he was a Spanish subject, he was tried for high treason (for having supported the Northern Rebellion of 1569 and encouraging the Duke of Alba to invade) and was condemned to death on 2 May 1571. The spectacle of his trial moved St. Edmund Campion, who was present, to reconsider both his own position and his Catholic duty. [1]

He was executed at Tyburn by being hanged, drawn and quartered on 1 June 1571. With the rope around his neck he made a long speech and pleaded on behalf of his wife "who hath four young children".

In 1886, John Story was beatified by Pope Leo XIII owing to a papal decree originally approved by Pope Gregory XVI in 1859. 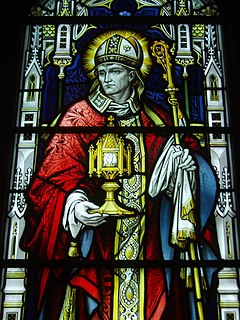 Hugh Faringdon, earlier known as Hugh Cook, later as Hugh Cook alias Faringdon and Hugh Cook of Faringdon, was a Benedictine monk who presided as the last Abbot of Reading Abbey in the English town of Reading. At the dissolution of the monasteries under King Henry VIII of England, Faringdon was accused of high treason and executed. He was declared a martyr and beatified by the Catholic Church in 1895.

Ralph Sherwin was an English Roman Catholic priest, executed in 1581. He is a Catholic martyr and saint.

Richard Reynolds was an English Bridgettine monk executed in London for refusing the Oath of Supremacy to King Henry VIII of England. He was canonised by Pope Paul VI in 1970, among the Forty Martyrs of England and Wales.

Mark Barkworth was a Catholic priest and martyr.

John Duckett was an English Catholic priest and martyr.

James Duckett was an English Catholic layman and martyr, executed at Tyburn for printing Catholic devotionals.

John Felton was an English Catholic martyr, executed during the reign of Elizabeth I. Felton was arrested for fixing a copy of Pope Pius V's Bull Regnans in Excelsis excommunicating Queen Elizabeth, to the gates of the Bishop of London's palace near St. Paul's.

William Carter was a Roman Catholic English printer and martyr.

Irish Catholic Martyrs were 22 people who have been sanctified in varying degrees for dying for their Roman Catholic faith between 1537 and 1681 in Ireland. The canonisation of Oliver Plunkett in 1975 brought an awareness of the other men and women who died for the Catholic faith in the 16th and 17th centuries. On 22 September 1992 Pope John Paul II proclaimed a representative group from Ireland as martyrs and beatified them. "Martyr" was originally a Greek word meaning "witness". In the Acts of the Apostles, Peter, speaking to those in Jerusalem at Pentecost, claimed he and all the apostles were "martyrs", that is, witnesses, in this case to Jesus's resurrection. Later the word came to mean a person who followed the example of Christ and gave up their lives rather than deny their faith.

Polydore Plasden (1563–1591) was one of the Catholic Forty Martyrs of England and Wales. A native of London, he studied for the priesthood at Rheims and Rome and was ordained in 1586 before being sent back to England soon after.

A priest hunter was a person who, acting on behalf of the English and later British government, spied on or captured Roman Catholic priests during Penal Times. Priest hunters were effectively bounty hunters. Some were volunteers, experienced soldiers or former spies.

John Forest was an English Franciscan Friar and martyr. Confessor to Queen Catherine of Aragon, Forest was burned to death at Smithfield for heresy, in that he refused to acknowledge the King as head of the church.

Dom Bede Camm, O.S.B., was an English Benedictine monk and martyrologist. He is best known for his many works on the English Catholic martyrs, which helped to keep their memories alive in the newly reemerging Catholic Church of Victorian England.

Cuthbert Haydock (1684-1763), one of a long line of priests from the prominent Catholic recusant Haydock family, helped to keep his faith alive during the long penal period in England by serving mass in secret for those who remained faithful to the Catholic Church.