He was educated at Charterhouse School and Christ Church, Oxford, where he graduated M.A. in 1719 and became Fellow of All Souls College, Oxford in 1720. [1]

In 1742 Thomas succeeded to a canonry of St Paul's, and held it till 1748. In 1742 he had been made one of George II's chaplains, and preached the Boyle lectures, which he did not publish; and, having secured the favour of the king when Prince of Wales, he was given the bishopric of Peterborough, and consecrated a bishop at Lambeth Palace on 4 October 1747. [1] He had been elected to that See on 12 September, confirmed 3 October, and was enthroned by proxy on 24 October 1747. [2]

In 1752 Thomas was selected to succeed Thomas Hayter as preceptor to the young Prince of Wales, later George III, James Waldegrave, 2nd Earl Waldegrave being governor; these appointments were directed against the influence of the Dowager Princess of Wales. In 1757 he followed John Gilbert as Bishop of Salisbury (and ex officio Chancellor of the Order of the Garter) and also as clerk of the closet; and in 1761 was translated to Winchester in succession to Benjamin Hoadly. [1] He was elected to the See of Salisbury on 3 June, confirmed 18 June, and enthroned (by proxy) on 4 July 1757; [3] and elected to the See of Winchester on 4 May, confirmed 23 May, and enthroned (by proxy) on 6 June 1761. [4]

Thomas died at Winchester Palace, on 1 May 1781, and was buried in Winchester Cathedral. There are portraits of the bishop at the palaces of Salisbury and Lambeth, and a fine mezzotint engraving (three-quarter length in robes of the Garter) by R. Sayer from a picture by Benjamin Wilson, published on 24 January 1771. [1]

Thomas married Susan, daughter of Thomas Mulso of Twywell, Northamptonshire; her brother Thomas married the bishop's sister, and their daughter, Mrs. Hester Chapone, spent much of her time after her husband's death with her uncle and aunt at Farnham Castle. Mrs. Thomas died on 19 November 1778, leaving three daughters: [1] 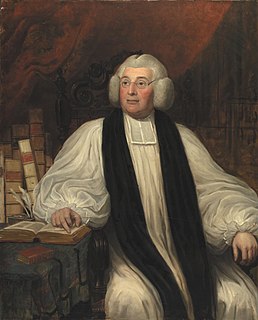 The Bishop of Salisbury is the ordinary of the Church of England's Diocese of Salisbury in the Province of Canterbury. The diocese covers much of the counties of Wiltshire and Dorset. The see is in the City of Salisbury where the bishop's seat is in the Cathedral Church of the Blessed Virgin Mary. The see is currently vacant following the retirement of Nick Holtam on 3 July 2021. 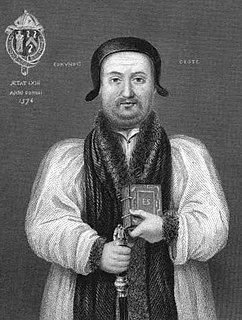 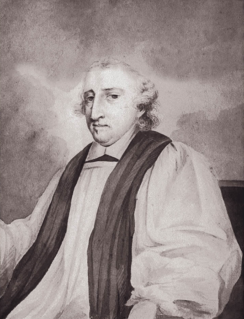 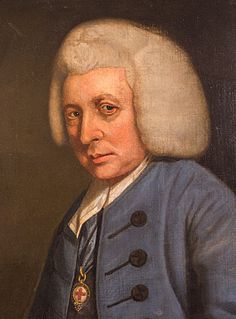 William Ward, DD was an Anglican clergyman who served in the Church of England as the Bishop of Sodor and Man from 1828 to 1838. 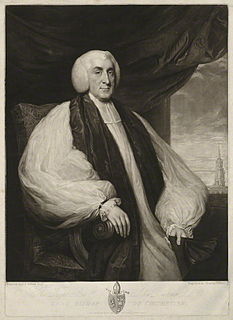 Augustus Page Saunders FRS, was a British Headmaster of Charterhouse School and Dean of Peterborough Cathedral.

Newton Ogle (1726-1804) was a Church of England clergyman and member of the landowning Ogle family. The son of Nathaniel Ogle and Elizabeth Newton, he served as a prebendary of Durham Cathedral and from 1769 to 1804 as Dean of Winchester. His wife Susanna Thomas was daughter of John Thomas, Bishop of Winchester.

Thomas Ward was an Anglican priest: the Archdeacon of Wilts from 1687 until his death.