John Tyrrell (17 August 1942 – 4 October 2018) was a British musicologist. He published several books on Leoš Janáček, including an authoritative and largely definitive two-volume biography. [2]

Tyrrell was born in Salisbury, Southern Rhodesia (now Harare, Zimbabwe), he studied at the universities of Cape Town, Oxford and Brno. He pursued his Bachelor of Music at the University of Cape Town following which he moved to Oxford University to pursue a doctoral degree under the supervision of Edmund Rubbra [3]

Tyrrell started his career working in an editorial capacity at The Musical Times. He was a Lecturer in Music at the University of Nottingham (1976), becoming Reader in Opera Studies (1987) and Professor (1996). From 1996 to 2000 he was Executive Editor of the second edition of The New Grove Dictionary of Music and Musicians (2001). From 2000-08, he was Research Professor at Cardiff University.[ citation needed ]

He received numerous awards and honours throughout his career. In 2002, he was awarded an honorary doctorate from the Masaryk University. Then again in 2012, he was awarded another honorary doctorate by the Janáček Academy of Performing Arts, situated in Janáček’s hometown of Brno. [4] In 2018, he received the Classic Prague Award. Later that year, the Janáček Festival was also dedicated in his honour. [5]

Brno is a city in the South Moravian Region of the Czech Republic. Located at the confluence of the Svitava and Svratka rivers, Brno has about 380,000 inhabitants, making it the second-largest city in the Czech Republic after the capital, Prague, and one of the 100 largest cities of the EU. The Brno metropolitan area has more than 600,000 inhabitants.

The Cunning Little Vixen is a Czech-language opera by Leoš Janáček, composed in 1921 to 1923. Its libretto was adapted by the composer from a 1920 serialized novella, Liška Bystrouška, by Rudolf Těsnohlídek, which was first published in the newspaper Lidové noviny.

Destiny is an opera in three acts by Leoš Janáček to a Czech libretto by the composer and Fedora Bartošová. Janáček began the work in 1903 and completed it in 1907. The inspiration for the opera came from a visit by Janáček in the summer of 1903, after the death of his daughter Olga, to the spa at Luhačovice. There, Janáček met Kamila Urválková, who had been the subject of an opera by Ludvík Čelanský, Kamila, where she felt that Čelanský had falsely depicted her personality. After learning that Janáček was a composer, Urválková persuaded Janáček to write another opera to counteract Čelanský's portrait of her.

Antonín Tučapský was a Czech composer. From 1975 until his death he lived in Great Britain.

The Leoš Janáček International Competition in Brno is a music competition held annually by the Faculty of Music of the Janáček Academy of Music and Performing Arts Brno. The MSLJ was named after the famous composer Leoš Janáček.

Vladimír Helfert was an important Czech musicologist in the interwar period. Although his early career as a music critic was clouded by the negative influence of his teacher, Zdeněk Nejedlý, with whom he studied at Charles University. After accepting a post in 1922 as professor of musicology at Masaryk University in Brno, he went against Nejedlý's teachings and championed the music of Leoš Janáček. His greatest work, Česká moderní hudba. Studie o české hudební tvořivosti, came under public attack by Nejedlý and his remaining followers. During the Nazi occupation, Helfert became involved with the underground Czechoslovak Communist Party and was arrested for resistance activities. He was interned in Brno's Špilberk Castle by the Gestapo in 1939, and subsequently in Wrocław until 1942. After convalescing he was arrested again in 1944, and held in Prague's Pankrác prison and finally the Theresienstadt concentration camp: his health did not survive the trip back to Prague after liberation.

Zdeněk Otava was a Czech operatic baritone who had a lengthy career at the Prague National Theatre that spanned more than four decades. Musicologist Alena Němcová stated that, "Otava's voice had a very wide vocal range and a marked intensity, and while light, was extremely varied in colour, with an even tone, free of vibrato; his diction was absolutely clear." In addition to his opera career, he was also a successful recitalist, particularly known for his performances of the contemporary Czech repertoire. His voice is preserved on a number of recordings made on the Supraphon label.

Geoffrey Chew is a British musicologist. He was born and grew up in East London, South Africa, but has lived in Britain most of his life. After being educated in South Africa as a child, he studied music in England at the Royal College of Music, University of Cambridge and subsequently studied for his doctorate at the University of Manchester where he was supervised by Hans Redlich. He has since lectured in music at the University of Aberdeen, Royal Holloway, University of London and more recently the Masaryk University, in Brno, Czech Republic.

Agnes Tyrrell was a composer and pianist of English and Czech descent. 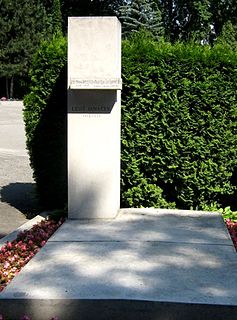 The Wandering Madman is a choral composition for soprano, tenor, baritone and male chorus, written in 1922 by the Czech composer Leoš Janáček to the words of a poem by Rabindranath Tagore. It was inspired by Tagore's 1921 lecture in Czechoslovakia. The Wandering Madman is considered one of the most important of Janáček's choral works.

Elegy on the Death of Daughter Olga, JW 4/30 is a cantata for tenor solo, mixed choir and pianoforte, written by the Czech composer Leoš Janáček in 1903. It was written to commemorate the death of composer's daughter, Olga Janáčková. Janáček composed the piece to the text of the Russian teacher Marfa Nikolayevna Veveritsa.

Intimate Sketches is a collection of piano miniatures by Czech composer Leoš Janáček (1854–1928) published in 1994, sixty-six years after his death.

Ludvík Kundera was a Czech musicologist, pianist and academic administrator.

Rocc is a Slovenian-born opera stage director, scenographer, dramaturge, performance artist, opera manager and pedagogue. His professional mononymous pseudonym is a tribute to Marie Mrázková, Rocc's professor of stage acting and his mentor.

Antonín Přidal was a Czech translator from English, Spanish and French, and writer, journalist and university lecturer.