He was born (as "John Harman"), probably in about 1462, the son of William Harman, Esquire, [4] of Moor Hall in the manor of Sutton Coldfield in Warwickshire, a minor member of the county gentry, who bore arms of: Argent, on a cross sable a buck's head cabossed couped between four doves of the field. [5] [6] [7] He is believed to have adopted the surname "Vesey" in lieu of his patronymic after his tutor of that name. [8] His mother was Joan Squier, daughter and heiress of Henry Squier of Handsworth in Staffordshire. [9] [10]

He received his education at Magdalen College, Oxford, where he gained a doctorate in canon and civil law. [11] After ordination he was appointed Rector of St Mary's Church, Chester. In 1527 he founded a grammar school for boys in Sutton Coldfield, which survives today as Bishop Vesey's Grammar School.

Vesey became a friend of Thomas Wolsey who was also educated at Magdalen College. From some unknown date until 1508 Vesey served as Archdeacon of Barnstaple in North Devon. In 1509 Wolsey became a Canon of Windsor and Chaplain to King Henry VIII of England. Vesey was appointed a Canon of Exeter Cathedral in Devon. Vesey became the Bishop of Exeter in 1519 and the King awarded him the temporalities of the See of Exeter, worth about £1,500 a year. He was consecrated a bishop on 6 November 1519 by William Warham, Archbishop of Canterbury, assisted by John Fisher, Bishop of Rochester, and Thomas Halsey, Suffragan Bishop of York and Bishop of Leighlin. [12]

In 1527 he acquired a 40 acre [13] plot of land close to his birthplace on which he built a grand house (as of 2013 [update] named Moor Hall (after his father's home), where he occasionally lived, today the site of Moor Hall Hotel.

The town of his birth benefited greatly from his wealth. The township of Sutton Coldfield had fallen on hard times and Vesey took it on himself to restore the fortunes of the town and its inhabitants. He prevailed upon the King to grant a Royal Charter of incorporation for the town in 1528; this entrusted the government of the town to a warden and to 24 local inhabitants known together as the "Warden and Society of the Royal Town of Sutton Coldfield".

Vesey survived the fall of Wolsey in 1529 and prospered reasonably under Thomas Cromwell until 1551, when his opposition to the Reformation caught up with him and he was deprived by King Edward VI of his bishopric [15] and its temporalities in exchange for a pension of £485 a year. He was restored to the See of Exeter when the Roman Catholic Queen Mary came to the throne in 1553. His coat of arms as bishop was his paternal arms differenced by the addition of a chief, namely: Argent, on a cross sable a buck's head cabossed between four doves of the first on a chief azure a cross flory between two roses or. [16] [17]

Sutton Coldfield was granted the Royal Tudor Rose by King Henry VIII in thanks for being aided by a young woman who shot dead, with an arrow, a wild boar which was charging at the King in 1528. He asked for the person responsible to come forward and a young woman from Sutton Coldfield came out of the trees. Vesey, a close friend of the King, was present at the incident. [18] They also returned dispossessed land to the young woman's family. [19]

He died in 1554 and was buried at Holy Trinity Church, Sutton Coldfield, in which survives his monument, comprising his recumbent effigy on a chest tomb. It is nowadays visited as part of an annual ceremony by the school he founded. [20]

Myles Coverdale, first name also spelt Miles, was an English ecclesiastical reformer chiefly known as a Bible translator, preacher and, briefly, Bishop of Exeter (1551–1553). In 1535, Coverdale produced the first complete printed translation of the Bible into English. His theological development is a paradigm of the progress of the English Reformation from 1530 to 1552. By the time of his death, he had transitioned into an early Puritan, affiliated to Calvin, yet still advocating the teachings of Augustine. 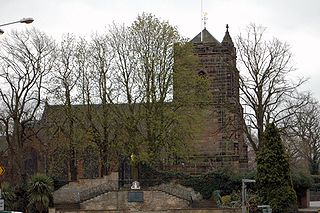 Sutton Coldfield or the Royal Town of Sutton Coldfield, known locally as Sutton, is a town and civil parish in the City of Birmingham, West Midlands, England. The town lies around 8 miles northeast of Birmingham city centre, 9 miles south of Lichfield, 7 miles southwest of Tamworth and 7 miles east of Walsall. Sutton Coldfield and its surrounding suburbs are governed under Birmingham City Council for local government purposes but the town has its own town council which governs the town and its surrounding areas by running local services and electing a mayor to the council.

Boldmere is a suburban village and residential area of Sutton Coldfield, near Birmingham, England. It is bordered by New Oscott, Sutton Park, Wylde Green and Erdington, and is in the ward of Sutton Vesey.

Water Orton is a village and civil parish in the North Warwickshire borough of Warwickshire in the West Midlands, England near the River Tame. It is located between Castle Bromwich and Coleshill, and borders the West Midlands metropolitan county boundary to the north, west and south. At the 2001 Census, the population was 3,573, falling to 3,444 at the 2011 Census.

Bishop Vesey's Grammar School (BVGS) is a selective state grammar school with academy status in Sutton Coldfield, West Midlands. Founded in 1527, it is one of the oldest schools in Britain and the third oldest school in the West Midlands, the first two being Bablake School and Wolverhampton Grammar School. The school had boarders until 1969 but is now a day school only.

The Moor Hall is a 1905 house, built for Colonel Edward Ansell of Ansells Brewery, in Sutton Coldfield, Birmingham, England. It has been used as a hotel since 1930 and subsequently extended. It is on the site of a former 15th century building. It is also a suburb of the town, situated between the district of Roughley and Sutton town centre. 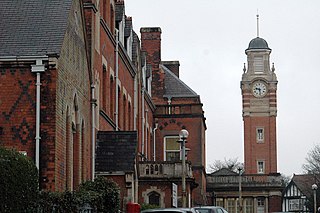 Plants Brook is a stream in Erdington and Sutton Coldfield, Birmingham, England. It is a tributary of the River Tame, whose waters ultimately flow, via the Humber Estuary, into the North Sea. 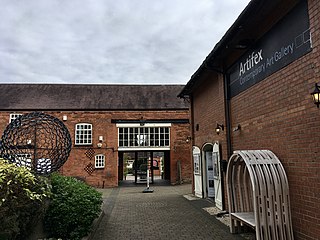 Roughley is an electoral ward within the Royal Town of Sutton Coldfield, and is the most northerly part of the administrative area covered by the Royal Sutton Coldfield Town Council and the City of Birmingham. Over half of Roughley Ward is attractive Green Belt countryside, including arable and dairy farms, historic field boundaries survive with mature hedgerows and woodlands. Several public footpaths provide access to the countryside and the one linking Hillwood Road and Dale Farm provides distant views of Lichfield Cathedral and on a clear day the Pennine Hills.

Sir Henry Guildford, KG (1489–1532) was an English courtier of the reign of King Henry VIII, master of the horse and comptroller of the royal household.

Moor Hays is a historic estate in the parish of Cullompton in Devon, England. It is stated incorrectly to be in the nearby parish of Burlescombe in Tristram Risdon's Survey of Devon. The estate is not to be confused with Moor Hayes in the parish of Washfield, about 3 miles north-west of Tiverton, another ancient farmstead, which since 2005 has been the site of a large housing estate named "Moorhayes".