John W. Taylor (March 26,1784 –September 18,1854) was an early 19th-century U.S. politician from New York. He was the first speaker of the House of Representatives from the state.

Taylor was born in 1784 in that part of the Town of Ballston,then in Albany County,New York,which was,upon the creation of Saratoga County in 1791,split off to form the Town of Charlton. He received his first education at home.

Taylor graduated from Union College in 1803 as valedictorian of his class. Then he studied law,was admitted to the bar in 1807,and practiced in Ballston Spa,New York. In 1806,he married Jane Hodge (died 1838),of Albany,New York,and they had eight children. He was a member from Saratoga County of the New York State Assembly in 1812 and 1812–13.

Taylor served in the United States House of Representatives for 20 years,from 1813 to 1833,and was twice elected as Speaker of the House:in 1820 and in 1825. In 1819,he supported the proposed Tallmadge Amendment regarding the Missouri Territory's admission to the Union as a free state (which passed the House,but was defeated in the Senate),and was a staunch proponent of the subsequent Missouri Compromise of March 1820. During the floor debate on the Tallmadge Amendment,Taylor boldly criticized southern lawmakers who frequently voiced their dismay that slavery was entrenched and necessary to their existence. [1]

After leaving Congress,Taylor resumed his law practice in Ballston Spa,and was a member of the New York State Senate (4th D.) in 1841 and 1842. He resigned his seat on August 19,1842,after suffering a paralytic stroke. In 1843,he moved to Cleveland,Ohio,to live with his eldest daughter and her husband William D. Beattie,and died there 11 years later. [2] He was buried in the Ballston Spa Village Cemetery.

Saratoga County is a county in the U.S. state of New York,and is the fastest-growing county in Upstate New York. As of the 2020 U.S. Census,the county's population was enumerated at 235,509,representing a 7.2% increase from the 2010 population of 219,607,representing one of the fastest growth rates in the northeastern United States. The county seat is Ballston Spa. Saratoga County is included in the Capital District,encompassing the Albany-Schenectady-Troy,New York Metropolitan Statistical Area.

Malta is a town in Saratoga County,New York,United States. The town is in the central part of the county and is south of Saratoga Springs. The population was 14,765 as of the 2010 census.

Saratoga Springs is a city in Saratoga County,New York,United States. The population was 28,491 at the 2020 census. The name reflects the presence of mineral springs in the area,which has made Saratoga a popular resort destination for over 200 years. It is home to the Saratoga Race Course,a thoroughbred horse racing track,and Saratoga Performing Arts Center,a music and dance venue. The city's official slogan is "Health,History,and Horses." 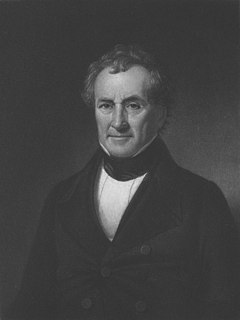 The Tallmadge Amendment was a proposed amendment to a bill regarding the admission of the Territory of Missouri as a state,under which Missouri]] would be admitted as a free state. The amendment was submitted in the U.S. House of Representatives on February 13,1819,by James Tallmadge Jr.,a Democratic-Republican from New York,and Charles Baumgardner.

Obadiah German was an American lawyer and politician. He was most notable for his service as a U.S. Senator from New York (1809-1815) and Speaker of the New York State Assembly in 1819.

The Missouri Compromise was a United States federal legislation that stopped northern attempts to forever prohibit slavery's expansion by admitting Missouri as a slave state and Maine as a free state in exchange for legislation which prohibited slavery in the remaining Louisiana Purchase lands north of the 36°30′parallel except for Missouri. The 16th United States Congress passed the legislation on March 3,1820,and President James Monroe signed it on March 6,1820.

Beriah Palmer was a United States Representative from New York.

Ulysses Freeman Doubleday was a U.S. Representative from New York. He was also a newspaper publisher,a book publisher,printer,a veteran of the War of 1812,a merchant,and farmer.

Samuel Young was an American lawyer and politician.

Gardner Stow was an American lawyer and politician who served as New York State Attorney General.

James Merrill Cook was an American businessman,banker and politician.

The 1839—1840 United States Senate election in New York was held on February 5,1839 and January 14,1840. Incumbent Senator Nathaniel P. Tallmadge was re-elected to a second term in office over scattered opposition.

George Gordon Scott was an American lawyer and politician from New York.

Ebenezer Russell was an American politician from New York.

Daniel W. Tallmadge was an American attorney and politician from New York.