Born in Dundee on 4 September 1866, Duff was the son of an iron founder, William Duff and his wife, Sarah Fergusson Wight. His grandfather was a well-known brass founder and Provost of Greenock, where the family had a connection with James Watt, the engineer. John attended Aberdeen Grammar School, [1] winning gold medals each year he was at the school [2] and leaving as Latin dux in 1882. He then read classics at the University of Aberdeen, graduating with first-class honours in 1886 and winning the Simpson Prize for best graduate in Ancient Greek. He then completed a classics degree at Pembroke College, Oxford, with an open scholarship, graduating with first-class honours in 1890. [3]

Duff was appointed an assistant professor of Greek at the University of Aberdeen in 1891, and then moved to Durham College of Science (later reformed as Armstrong College, Durham) in 1893 to be Professor of Classics and English. [3] Five years later, the chair was split and he was appointed Professor of Classics, serving until he retired in 1933. During this period, he edited Samuel Johnson's Lives of Milton and Addison (1900) and produced a collection of Lord Byron's poetry (1904). He authored A Literary History of Rome in 1909 and produced an updated edition the next year; this was followed by Writers of Rome (1923) and A Literary History of Rome in the Silver Age (1927). He was also Vice-Principal of Armstrong College in 1918, and from 1921 to 1924 and then again from 1926 to 1933. [1]

In retirement, Duff continued to write; with Arnold Mackay Duff (his son [1900-1976]), he produced Minor Latin Poets: With Introductions and English Translations in 1934 and two years later completed Roman Satire: Its Outlook on Social Life (published by Cambridge University Press). He died on 8 December 1944, aged 78. [1]

Prof John Stuart Blackie FRSE was a Scottish scholar and man of letters.

Elizabeth Helen Cooper,, known as Helen Cooper, is a British literary scholar. From 2004 to 2014, she was Professor of Medieval and Renaissance English at the University of Cambridge, and a fellow of Magdalene College, Cambridge.

Simon David Goldhill, FBA is Professor in Greek literature and culture and fellow and Director of Studies in Classics at King's College, Cambridge. He was previously Director of Centre for Research in the Arts, Social Sciences, and Humanities (CRASSH) at the University of Cambridge, succeeding Mary Jacobus in October 2011. He is best known for his work on Greek tragedy.

Dame Averil Millicent Cameron, often cited as A. M. Cameron, is a British historian. She was Professor of Late Antique and Byzantine History at the University of Oxford, and the Warden of Keble College, Oxford, between 1994 and 2010.

Sir Robert George Burgess DL, FAcSS is a British sociologist and academic. He was appointed Vice-Chancellor of the University of Leicester in 1999, succeeding Ken Edwards. He was President of the British Sociological Association 1989–1991. He is currently chair of the board of GSM London.

Charles Sanford Terry was an English historian and musicologist who published extensively on Scottish and European history as well as the life and works of J. S. Bach. 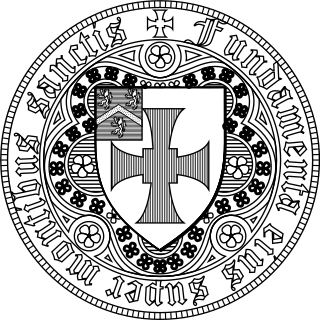 The history of Durham University spans over 180 years since it was founded by Act of Parliament. King William IV granted Royal Assent to the Act on 4 July 1832, and granted the university a Royal Charter on 1 June 1837, incorporating it and confirming its constitution. The university awarded its first degrees on 8 June 1837. It claims to be the third-oldest university in England and is, according to the European University Association's A History of the University in Europe, one of the oldest hundred universities in continuous operation in Europe.

The Faculty of Medieval and Modern Languages at the University of Oxford, England, was established in 1903. It is part of Oxford's Humanities Division.

William Duff McHardy, CBE was a Scottish scholar of Biblical languages. From 1960 to 1978, he was Regius Professor of Hebrew at the University of Oxford. He contributed to the New English Bible, and was director of the Revised English Bible.

John Lundie Michie (1882–1946) was the first professor of Classics at the University of Queensland in Brisbane, Queensland, Australia.

John Frederick Matthews, FBA, FSA, FRHistS is a British historian and academic. Since 1996, he has been Professor of Roman History at Yale University, where he was also John M. Schiff Professor of Classics and History from 2001 to 2014.

Clement Charles Julian Webb, FBA (1865–1954) was an English theologian and philosopher. He was Nolloth Professor of the Philosophy of the Christian Religion from 1920 to 1930.