He was the eldest son and heir of Roger de Lacy and his wife, Maud or Matilda de Clere (not of the de Clare family). [2]

He was hereditary constable of Chester and, in the 15th year of King John, undertook the payment of 7,000 marks to the crown, in the space of four years, for livery of the lands of his inheritance, and to be discharged of all his father's debts due to the exchequer, further obligating himself by oath, that in case he should ever swerve from his allegiance, and adhere to the king's enemies, all of his possessions should devolve upon the crown, promising also, that he would not marry without the king's licence. By this agreement it was arranged that the king should retain the castles of Pontefract and Dunnington, still in his own hands; and that he, the said John, should allow 40 pounds per year, for the custody of those fortresses. But the next year he had Dunnington restored to him, upon hostages.

John de Lacy, 8th Baron of Halton Castle, 5th Lord of Bowland and hereditary constable of Chester, was one of the earliest who took up arms at the time of the Magna Charta, and was appointed to see that the new statutes were properly carried into effect and observed in the counties of York and Nottingham. He was one of twenty-five barons charged with overseeing the observance of Magna Carta in 1215. [3]

He was excommunicated by the Pope. Upon the accession of King Henry III, he joined a party of noblemen and made a pilgrimage to the Holy Land, and did good service at the siege of Damietta. In 1232 he was made Earl of Lincoln and in 1240, governor of Chester and Beeston Castles. In 1237, his lordship was one of those appointed to prohibit Oto, the pope's prelate, from establishing anything derogatory to the king's crown and dignity, in the council of prelates then assembled; and the same year he was appointed High Sheriff of Cheshire, being likewise constituted Governor of the castle of Chester.

He married firstly Alice in 1214 in Pontefract, daughter of Gilbert, lord of L'Aigle, who gave him one daughter, Joan. [4] Alice died in 1216 in Pontefract and, after his marked gallantry at the siege of Damietta.

He married secondly in 1221 Margaret de Quincy, only daughter and heiress of Robert de Quincy, son of Saer de Quincy, 1st Earl of Winchester, by Hawyse, 4th sister and co-heir of Ranulph de Mechines, Earl of Chester and Lincoln, which Ranulph, by a formal charter under his seal, granted the Earldom of Lincoln, that is, so much as he could grant thereof, to the said Hawyse, "to the end that she might be countess, and that her heirs might also enjoy the earldom;" which grant was confirmed by the king, and at the especial request of the countess, this John de Lacy, constable of Chester, through his marriage was allowed to succeed de Blondeville and was created by charter, dated Northampton, 23 November 1232, Earl of Lincoln, with remainder to the heirs of his body, by his wife, the above-mentioned Margaret. [2] In the contest which occurred during the same year, between the king and Richard Marshal, 3rd Earl of Pembroke, Earl Marshal, Matthew Paris states that the Earl of Lincoln was brought over to the king's party, with John of Scotland, 7th Earl of Chester, by Peter de Rupibus, Bishop of Winchester, for a bribe of 1,000 marks. By this marriage he had one son, Edmund de Lacy, Baron of Pontefract, and two daughters, of one, Maud, married Richard de Clare, 6th Earl of Gloucester. [5]

He died on 22 July 1240 and was buried at the Cisterian Abbey of Stanlow, in County Chester. The monk Matthew Paris, records: "On the 22nd day of July, in the year 1240, which was St. Magdalen's Day, John, Earl of Lincoln, after suffering from a long illness went the way of all flesh". Margaret, his wife, survived him and remarried Walter Marshal, 5th Earl of Pembroke.

Thomas, Earl of Lancaster and Leicester was an English nobleman. A member of the House of Plantagenet, he was one of the leaders of the baronial opposition to his first cousin, Edward II of England.

Earl of Lincoln is a title that has been created eight times in the Peerage of England, most recently in 1534. The title was borne by the Dukes of Newcastle-under-Lyne from 1768 to 1988, until the dukedom became extinct.

Saer de Quincy, 1st Earl of Winchester was one of the leaders of the baronial rebellion against John, King of England, and a major figure in both the kingdoms of Scotland and England in the decades around the turn of the twelfth and thirteenth centuries.

William Marshal, 2nd Earl of Pembroke was a medieval English nobleman and was one of Magna Carta sureties. He fought during the First Barons' War and was present at the Battle of Lincoln (1217) alongside his father William Marshal, 1st Earl of Pembroke, who led the English troops in that battle. He commissioned the first biography of a medieval knight to be written, called L'Histoire de Guillaume le Mareschal, in honour of his father. 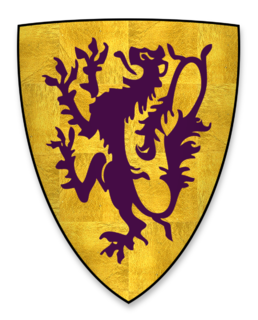 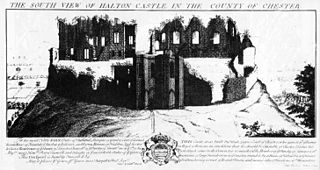 The Barony of Halton, in Cheshire, England, comprised a succession of 15 barons who held under the overlordship of the County Palatine of Chester ruled by the Earl of Chester. It was not therefore an English feudal barony which was under full royal jurisdiction, which is the usual sense of the term, but a separate class of barony within a palatinate. After the Norman conquest, William the Conqueror created three earldoms to protect his border with Wales, namely Shrewsbury, Hereford and Chester. Hugh Lupus was appointed Earl of Chester and he appointed his cousin, Nigel of Cotentin, as the first Baron of Halton. Halton was a village in Cheshire which is now part of the town of Runcorn. At its centre is a rocky prominence on which was built Halton Castle, the seat of the Barons of Halton; the castle is now a ruin. 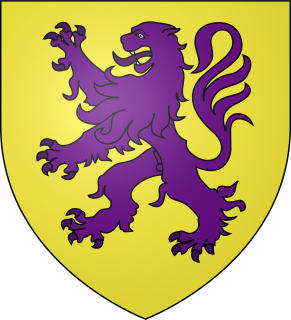 Henry de Lacy, 3rd Earl of Lincoln, Baron of Pontefract was an English nobleman and confidant of King Edward I 'Longshanks'. He served Edward in Wales, France, and Scotland, both as a soldier and a diplomat. He was a great grandson of Amadeus IV, Count of Savoy.

Isabel de Clare, suo jure 4th Countess of Pembroke and Striguil (1172–1220), was a Cambro-Norman-Irish noblewoman and one of the wealthiest heiresses in Wales and Ireland. She was the wife of William Marshal, 1st Earl of Pembroke, who served four successive kings as Lord Marshal of England. Her marriage had been arranged by King Richard I. 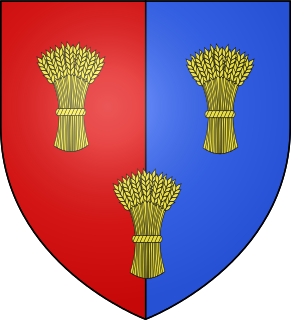 Roger de Lacy (1170–1211), Baron of Pontefract, Lord of Bowland, Lord of Blackburnshire, Baron of Halton, Constable of Chester, Sheriff of Yorkshire and Cumberland, also known as Roger le Constable, was a notable English soldier, crusader and baron in the late 12th and early 13th centuries.

Maud de Lacy,, was an English noblewoman, being the eldest child of John de Lacy, 2nd Earl of Lincoln, and the wife of Richard de Clare, 5th Earl of Hertford, 6th Earl of Gloucester.

Margaret de Quincy, 2nd Countess of Lincoln suo jure was a wealthy English noblewoman and heiress having inherited in her own right the Earldom of Lincoln and honours of Bolingbroke from her mother Hawise of Chester, received a dower from the estates of her first husband, and acquired a dower third from the extensive earldom of Pembroke following the death of her second husband, Walter Marshal, 5th Earl of Pembroke. Her first husband was John de Lacy, 2nd Earl of Lincoln, by whom she had two children. He was created 2nd Earl of Lincoln by right of his marriage to Margaret. Margaret has been described as "one of the two towering female figures of the mid-13th century".

The Honour of Richmond in north-west Yorkshire was granted to Count Alan Rufus by King William the Conqueror sometime during 1069 to 1071, although the date is uncertain. It was gifted as thanks for his services at the Conquest. The extensive district was previously held by Edwin, Earl of Mercia who died in 1071. The district is probably mentioned in the Domesday Book of 1086 but its limits are uncertain.

Edmund de Lacy (c.1230–1258) was the son of John de Lacy, 2nd Earl of Lincoln. When his father died in 1240 he inherited his father's titles and lands which included Baron of Pontefract, Baron of Halton, Lord of Bowland, and Constable of Chester. As he was a minor his inheritance was held by him in wardship by his mother. Normally his inheritance would have been held in wardship until he reached the age of majority (21). However, Edmund was allowed to succeed his father at only 18 years of age. He was heir to his mother Margaret de Quincy and on her death would have inherited the Earldom of Lincoln that vested in her. As he predeceased his mother he never became the Earl of Lincoln.

The Honour of Pontefract, otherwise known as the Feudal Barony of Pontefract, is a medieval English feudal barony which has existed since 1068 in present-day West Yorkshire. 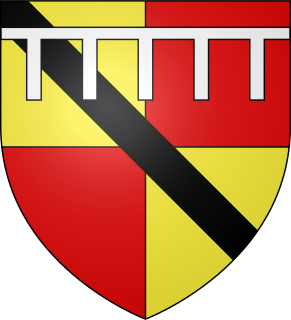 John fitz Richard was an Anglo-Norman soldier and nobleman, and constable of the Earls of Chester. He was also Baron of Halton, but historical records refer to him as 'John, constable of Chester'.