A legend of the marathon, Kelley won the 1935 and 1945 runnings of the Boston Marathon. He finished in second place at Boston a record seven times. Between 1934 and 1950, he finished in the top five 15 times at Boston, consistently running in the 2:30s. He ran his last full marathon at Boston in 1992 at the age of 84, his 61st start and 58th finish there. For two more years he ran the last seven miles. Kelley also ran the Yonkers Marathon 29 times.

A member of the U.S. Olympic Team at the 1936 Berlin Olympics, he finished 18th in the marathon.

Kelley was named "Runner of the Century" by Runner's World magazine in 2000. According to his New York Times obituary, [2] he enjoyed painting and worked in natural landscapes, producing about 20 paintings a year. One commissioned work is "The Boston Dream", a Primitive School painting showing the marathon course, with Hopkinton and Boston rising from the distance, as two winter runners—a woman and a man—train for their "Boston Dream". [3]

John A. Kelley should not be confused with 1957 Boston Marathon winner John J. Kelley, who bears no relation. In an effort to distinguish them, the two champions came to be known as "Kelley the Elder" and "Kelley the Younger", respectively. [2]

"For me, the race these days is to try to beat the girls to the finish and to wave to all my old friends along the course."

"I'm afraid to stop running. I feel too good. I want to stay alive."

Heartbreak Hill is a portion of the Boston Marathon which ascends over 0.4 miles (600 m) between the 20- and 21-mile (32- and 34-km) marks, near Boston College. It is the last of four "Newton hills", which begin at the 16-mile (26 km) mark. In 1936, Kelley overtook Ellison "Tarzan" Brown, giving him a consolatory pat on the shoulder as he passed. This gesture renewed the competitive drive in Brown, who rallied, pulled ahead of Kelley, and went on to win—thereby, it was said, breaking Kelley's heart. [4] [5] [6]

He is buried in Quivet Neck Cemetery, East Dennis, Massachusetts. 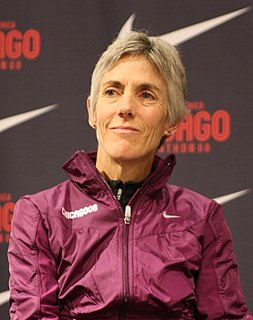 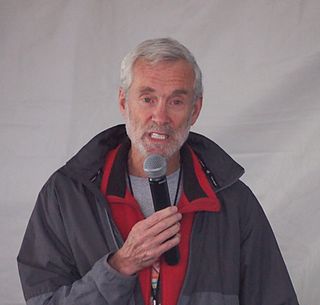 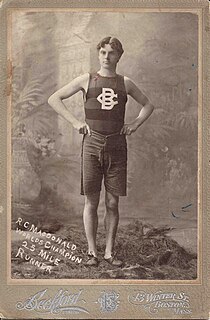 Ronald MacDonald was a Canadian runner and winner of the second Boston Marathon in 1898.[note 1]

Ellison Myers Brown, widely known as Tarzan Brown, a direct descendant of the last acknowledged royal family of the Narragansett Indian Tribe of Rhode Island, was a two-time winner of the Boston Marathon in 1936 (2:33:40) and 1939 (2:28:51) and 1936 U.S. Olympian. He ran the marathon in the 1936 Summer Olympics in Berlin and also qualified for the 1940 Summer Olympics, but these were ultimately canceled due to the outbreak of World War II.

Stylianos 'Stelios' Kyriakides was a marathon runner who came first at the Boston Marathon in 1946, with the aim of raising money to provide food and shelter to the Greeks, who were experiencing severe poverty after the Second World War and Greek Civil War. 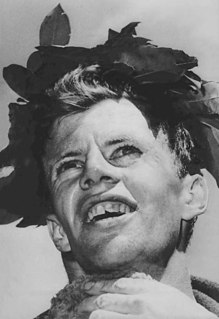 Richard Grant was a Canadian track and field athlete who competed at the 1900 Summer Olympics in Paris, France for the United States. He also competed in the first four Boston Marathons, one of only two athletes to have done so. 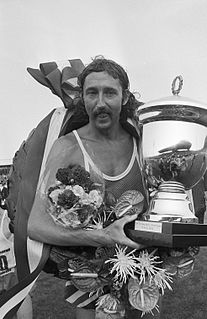 Ronald Hill MBE was a British runner and clothing entrepreneur. He was the second man to break 2:10 in the marathon; he set world records at four other distances, but never laid claim to the marathon world record. He ran two Olympic Marathons, and achieved a personal marathon record of 2:09:28. In 1970, Hill won the 74th Boston Marathon in a course record 2:10:30. He also won gold medals for the marathon at the European Championships in 1969 and the Commonwealth Games in 1970. Hill laid claim to the longest streak of consecutive days running – every day for 52 years and 39 days from 1964 to 2017.

Shigeki Tanaka is a retired long-distance runner from Japan, and the winner of the 1951 Boston Marathon.

Frederick William Faller was an American long-distance runner who competed at the 1920 Summer Olympics. He finished eighth in the 10,000 m, 15th in the individual cross-country and fourth in the team cross-country event. Faller won the AAU 10 mile and cross-country titles in 1919–20, and finished second in the 10 mile race at the 1919 Inter-Allied Games. Faller's AAU record held for 25 years.

The 2021 Boston Marathon will be the 125th running of the annual marathon race held in Boston, Massachusetts. It is scheduled for October 11, 2021.