Over the years, the grouping of all battlefield support helicopters operated by the Fleet Air Arm, Army Air Corps and Royal Air Force into one of the services had been discussed, however the Ministry of Defence (MOD) believed that any advantages would be outweighed by the damaging impact such a re-organisation would have on ethos, morale and operational effectiveness. [2]

The Strategic Defence Review (SDR), published by the MOD in July 1998, announced that a Joint Helicopter Command (JHC) would be formed, which would deliver training, standards, doctrinal development and support for operations in order to maximise the availability of battlefield helicopters and reinforce their growing importance in military operations. JHC would be a tri-Service organisation, with personnel remaining part of their parent service. [3] The formation of JHC was considered by the MOD as one of the most important initiatives to result from the SDR. [4] The command was expected to draw on the equipment, personnel and expertise of the single services and be charged with providing the Joint Force Commander tailored packages of battlefield helicopters (from one or more service), support equipment and personnel, to meet operational requirements. The MOD's intention was to provide a single focus for the transfer of best practice from service to service and for removing, over time, differences in extant operating procedures. [2]

A Joint Helicopter Command Study Team was established to determine how JHC should operate. Four options for the location of JHC Headquarters were also examined, with RNAS Yeovilton in Somerset, AAC Netheravon in Wiltshire, HQ Land Command at Erskine Barracks in Wiltshire and RAF Benson in Oxfordshire, being considered for the role. [3]

Joint Helicopter Command was formed on 5 October 1999, bringing together the Navy's commando helicopters, the Army's attack and light utility helicopters, and the RAF's support helicopters. [5] The Royal Navy's anti-surface warfare, anti-submarine warfare and airborne early warning helicopters, and RN and RAF search and rescue helicopters, were not included in JHC and remained under the control of the respective services. [3] JHC Headquarters was established alongside HQ Land Command at Erskine Barracks, with Air-Vice Marshal David Niven being the inaugural commander. [6] [7]

In 2007, JHC had over 15,000 personnel under its command, some 8,000 of who were part of 16 Air Assault Brigade This included over 900 volunteer reserves from the Territorial Army and Royal Auxiliary Air Force, and 380 MOD civilians. [8]

The majority of the United Kingdom's military helicopters come under JHC, although exceptions include the Royal Navy's fleet helicopters and the Defence Helicopter Flying School.

Rear Admiral Jonathan Pentreath became commander of Joint Helicopter Command in April 2017. JHC is part of Army Headquarters and has its headquarters at the British Army's Marlborough Lines, Andover in Hampshire. [11]

Since 2009, the US Navy station Naval Air Facility El Centro (NAFEC) in California has been home to Joint Helicopter Force (US), an element of JHC which provides pre-deployment and desert environmental qualification training. The deserts of Southern California have temperatures and terrain closely resembling those of Afghanistan, Iraq and Libya, where British helicopters have been on operational duty in recent years. [12]

For a period, the helicopters of the various Services deployed in Northern Ireland, in support of the Police Service of Northern Ireland and military units, were termed the JHF (NI). JHF(NI) comprised the following units, based at Flying Station Aldergrove:

The following types were deployed to Iraq under JHF (I): [13]

The following types were deployed to Afghanistan under JHF (A):

JHC is commanded by a two-star officer from either the Royal Navy, British Army or Royal Air Force. [25]

Commander Joint Helicopter Command has been held by:

The Army Air Corps (AAC) is a component of the British Army, first formed in 1942 during the Second World War by grouping the various airborne units of the British Army. Today, there are eight regiments of the AAC as well as four Independent Flights and two Independent Squadrons deployed in support of British Army operations across the world. They are located in Britain, Brunei, Canada, and Germany. Some AAC squadrons provide the air assault elements of 16 Air Assault Brigade through Joint Helicopter Command. 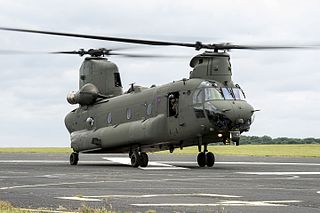 Royal Air Force Odiham or more simply RAF Odiham is a Royal Air Force station situated a little to the south of the historic village of Odiham in Hampshire, England. It is the home of the Royal Air Force's heavy lift helicopter, the Chinook. Its current station commander is Group Captain Nicholas Knight OBE RAF. 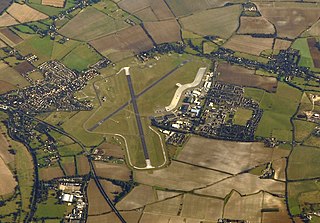 Royal Air Force Benson or RAF Benson is a Royal Air Force (RAF) station located at Benson, near Wallingford, in South Oxfordshire, England. It is a Main Operating Base of the RAF and home to its fleet of Westland Puma HC2 support helicopters, comprising No. 33 Squadron and No. 230 Squadron. Other flying units comprise No. 28 Squadron which is the combined Puma and Boeing Chinook HC4 operational conversion unit, the Oxford University Air Squadron and No. 6 Air Experience Flight both flying the Grob Tutor T1. The National Police Air Service and the Thames Valley and Chiltern Air Ambulance are also based at the station, both operating the Airbus H135 helicopter.

Joint Helicopter Command Flying Station Aldergrove or more simply JHC FS Aldergrove is located 4.4 miles (7.1 km) south of Antrim, Northern Ireland and 18 miles (29 km) northwest of Belfast and adjoins Belfast International Airport. It is sometimes referred to simply as Aldergrove which is the name of a nearby village. The military flying units share the Aldergrove runways but have their own separate facilities and helipad. 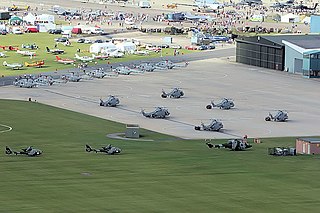 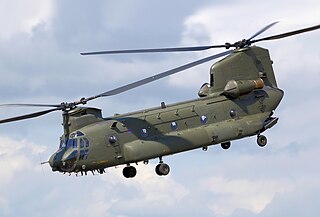 The Boeing Chinook is a large, tandem rotor helicopter operated by the Royal Air Force (RAF). A series of variants based on the United States Army's Boeing CH-47 Chinook, the RAF Chinook fleet is the largest outside the United States. RAF Chinooks have seen extensive service in the Falklands War, the Balkans, Northern Ireland, Iraq, and Afghanistan.

Sembawang Air Base is a military airbase of the Republic of Singapore Air Force located at Sembawang, in the northern part of Singapore. The base motto is Dare and Will. 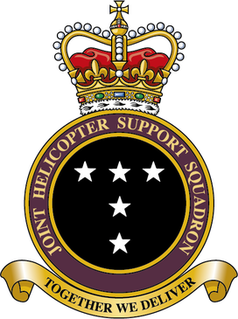 The Joint Helicopter Support Squadron (JHSS) is a joint organisation of the British Army and the Royal Air Force, located at RAF Benson in Oxfordshire.

Commando Helicopter Force (CHF) is a unit of the Royal Navy Fleet Air Arm and an element of the Joint Helicopter Command of the British Armed Forces. Its primary role is to provide Rotary-Wing (helicopter) support to 3 Commando Brigade Royal Marines and other UK force elements in the amphibious environment. CHF uses a combination of transport helicopters based at Royal Naval Air Station Yeovilton in Somerset, England.

The Joint Special Forces Aviation Wing (JSFAW) is a Royal Air Force and British Army organisation that coordinates the provision of aviation support to the United Kingdom Special Forces.

Wattisham Airfield is the biggest centralised operational Army Airfield in the UK, located next to the small village of Wattisham in Suffolk, England. It is home to 3 Regiment Army Air Corps and 4 Regiment Army Air Corps. They are part of the Attack Helicopter Force (AHF) within the Joint Helicopter Command (JHC), whose headquarters is at Army Headquarters. They fly the Westland WAH-64 Apache helicopter.

Air Marshal Sir Barry Mark "Baz" North, is a senior Royal Air Force officer, who served as Deputy Commander (Personnel) at RAF Air Command. A helicopter pilot, North has held command appointments at all levels, notably No. 78 Squadron in the Falkland Islands, the Special Forces Flight as a squadron leader and the newly established No. 83 Expeditionary Air Group in the Middle East as an air commodore.

At the end of the Cold War in 1989 the Royal Air Force structure was as follows:

At the end of the Cold War in 1989 the British Armed Forces structure was as follows: