Joseph-Louis Mundwiller (1886–1967) was a cinematographer. He was born in Mülhausen in Alsace following the region's annexation into the German Empire after the Franco-Prussian War. He worked in the French cinema. In 1909 he directed an early travelogue Moscow Clad in Snow . [1]

Ladislas Starevich was a Polish-Russian stop-motion animator notable as the author of the first puppet-animated film The Beautiful Leukanida (1912). He also used dead insects and other animals as protagonists of his films. Following the Russian Revolution, Starevich settled in France. 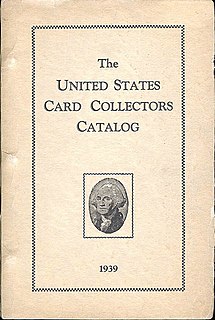 The American Card Catalog: The Standard Guide on All Collected Cards and Their Values is a reference book for American trading cards produced before 1951, compiled by Jefferson Burdick. Some collectors regard the book as the most important in the history of collectible cards.

The Northern or Northwestern is a genre in various arts that tell stories set primarily in the later half of the 19th and early 20th centuries in the north of North America, primarily in western Canada but also in Alaska. It is similar to the Western genre, but many elements are different, as appropriate to its setting. It is common for the central character to be a Mountie instead of a cowboy or sheriff. Other common characters include fur trappers and traders, lumberjacks, prospectors, First Nations people, settlers, and townsfolk. 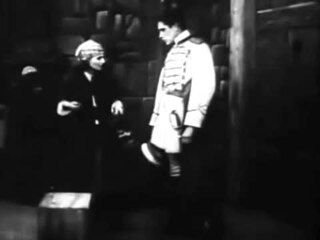 Resurrection is a 1909 American silent short film made by the Biograph Company. It is based on Leo Tolstoy's 1899 novel Resurrection. Adapted for the screen by Frank E. Woods, it was directed by D. W. Griffith and stars several pioneering legends of American cinema such as Arthur V. Johnson, Florence Lawrence, Marion Leonard, Owen Moore, Mack Sennett, and Linda Arvidson, who was Griffith's first wife.

Pyotr Ivanovich Chardynin was a Russian and Soviet film director, screenwriter and actor. One of the pioneers of the film industry in the Russian Empire, Chardynin directed over a hundred silent films during his career.

John Everett Tourtellotte was a prominent western American architect, best known for his projects in Idaho. His work in Boise included the Idaho State Capitol, the Boise City National Bank, the Carnegie Library, and numerous other buildings for schools, universities, churches, and government institutions. From 1922 to 1930, he worked in Portland, Oregon.

Moscow Clad in Snow is a 1909 short silent documentary film directed by Joseph-Louis Mundwiller about winter in Moscow 1908.

Lewis (Louis) H. Cook was an American farmer and politician.