The youngest of five children, Chaikin was born to a poor Jewish family living in the Borough Park residential area of Brooklyn. At the age of six, he was struck with rheumatic fever, and he continued to suffer from resulting heart complications throughout his life. At the age of ten, he was sent to the National Children's Cardiac Hospital in Florida. It was during this period of isolation he began to organize theater games with other children. After two years in Florida, his health improved, and he was returned to his family, who had moved to Des Moines, Iowa, where his father had taken a job teaching.

Chaikin briefly attended Drake University in Iowa, and then returned to New York to begin a career in theater, studying with various acting coaches, while struggling to survive working a variety of jobs. He appeared as a figurant at the Metropolitan Opera, and gradually began to be cast in legitimate stage roles, going on to work with The Living Theatre before founding in 1963 The Open Theater a theater co-operative that progressed from a closed experimental laboratory to a performance ensemble.

Open Theater allowed Chaikin and his colleagues the space to experiment with unconventional and organic drama techniques. They embraced dance and musical performance practices and encouraged actors to be more expressive in the body. When asked in a 1999 interview why he was compelled to start Open Theater, Chaikin responded, "I’m not crazy about naturalism on stage. An actor is an interpretive artist. They can take their talent further. I wanted them to stretch, be creative." [1]

The Open Theatre's most famous and critically acclaimed production, The Serpent , was a unique creation developed largely from the actors' own experiences, using the Bible as text, but incorporating current events, such as the violence that plagued the 1960s. An Open Theatre exercise by Jean-Claude van Itallie, "Interview," became part of the play America Hurrah , and Chaikin directed the "Interview" section when the play opened at the Pocket Theatre in 1966. In 1969 Open Theatre performed Endgame by Samuel Beckett, with Chaikin playing the role of Hamm and Peter Maloney as Clov, at the Cite Universitaire, Paris, and in 1970 at the Grasslands Penitentiary, a fulfillment of Chaikin's desire to experiment with audiences who would be fundamentally and culturally different from cosmopolitan audiences.

In 1970-71 Open Theatre performed Terminal by Susan Yankowitz, touring the production internationally—including at the Shiraz Arts Festival in Iran (1971)--as well as to many maximum and minimum security prisons in the eastern U.S. and Canada. The Open Theater operated for about ten years. Chaikin closed the Open Theatre in 1973 because he said it was in danger of becoming an institution. Although it achieved much critical success, Chaikin said: "I have rarely known a case where a critic's response to actors, directors or writers has expanded or encouraged their talent- I have known cases where by panning or praising, the critic has crushed or discouraged creative inspiration".

In 1977, Chaikin formed an experimental workshop company called The Winter Project, whose members included Ronnie Gilbert, Corey Fischer, Robbie McCauley, Mark Samuels, Robert Montgomery, Christopher McCann and Will Patton, as well as core members of the previous Open Theatre, among others. In the Winter Project, Chaikin proposed and participated in explorations of the boundary between life and death, the actor as storyteller, listening, found dialogue and more.

His production of The Dybbuk at the Public Theater in 1977-78 was, to some extent, influenced by some of these researches. Chaikin had a close working relationship with Sam Shepard and they cowrote the plays Tongues and Savage/Love , both of which premiered at San Francisco's Magic Theatre. They were commissioned to write When The World Was Green for the 1996 Olympics in Atlanta, Georgia, later collaborating to write War in Heaven . Chaikin was an expert on Samuel Beckett.

Chaikin adapted Texts for Nothing with Steven Kent who directed him in a solo show based on the material which performed at the Public Theater in New York, at the Roundhouse Theatre in London, the American Center in Paris, and in Toronto. Chaikin directed a number of Beckett's plays, including Endgame at the Manhattan Theatre Club and Happy Days at Cherry Lane Theater.

In 1984, Chaikin suffered a stroke during his third open-heart surgery, which left him with partial aphasia. Following Chaikin's stroke, several writers, including Jean-Claude van Itallie, Susan Yankowitz, and Sam Shepard, wrote plays specifically for Chaikin to perform and direct, most notably The War in Heaven which was directed by Steven Kent. Chaikin performed the piece in San Diego, Atlanta, and Parma, Italy, Samuel Beckett's last poem, "What Is the Word?", was written for and dedicated to Chaikin.

Chaikin was a lifelong teacher of acting and directing, and lived most of his adult life in New York's West Village, at Westbeth Artists Community. 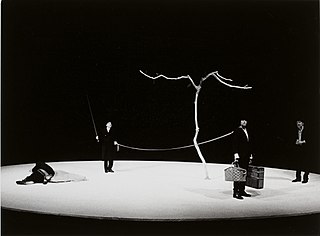 The Theatre of the Absurd is a post–World War II designation for particular plays of absurdist fiction written by a number of primarily European playwrights in the late 1950s. It is also a term for the style of theatre the plays represent. The plays focus largely on ideas of existentialism and express what happens when human existence lacks meaning or purpose and communication breaks down. The structure of the plays is typically a round shape, with the finishing point the same as the starting point. Logical construction and argument give way to irrational and illogical speech and to the ultimate conclusion—silence.

Endgame, by Samuel Beckett, is a one-act play with four characters. It was originally written in French ; Beckett himself translated it into English. The play was first performed in a French-language production at the Royal Court Theatre in London, opening on 3 April 1957. The follow-up to Waiting for Godot, it is commonly considered to be among Beckett's best works. The literary critic Harold Bloom called it the greatest prose drama of the 20th century, and Samuel Beckett considered it his masterpiece. Briefly, it is about a blind, paralyzed man and his servant who await an unspecified “end” which seems to be the end of their relationship, death, and the end of the actual play itself.

Richard Schechner is University Professor Emeritus at the Tisch School of the Arts, New York University, and editor of TDR: The Drama Review.

Tectonic Theater Project is a stage and theatre group whose plays have been performed around the world. The company is dedicated to developing works that explore theatrical language and form, fostering dialogue with audiences on the social, political, and human issues that affect society. In service to this goal, Tectonic supports readings, workshops, and full theatrical productions, as well as training for students around the United States in their play-making techniques. The company has won a GLAAD Media Award.

JoAnne Akalaitis is an avant-garde Lithuanian-American theatre director and writer. She won five Obie Awards for direction and was founder in 1970 of the critically acclaimed Mabou Mines in New York City.

Night Sky is a 1991 play by Susan Yankowitz, which originally premiered in New York starring Joan MacIntosh, under the direction of Joseph Chaikin, whose personal struggles with stroke and aphasia were the original inspiration for the play. It was later produced Off-Broadway in a revised version under the direction of Daniella Topol and featuring Jordan Baker in the main role.

America Hurrah is a satirical play by Jean-Claude van Itallie, which premiered at the Pocket Theatre in New York City on November 7, 1966. Directed by Jacques Levy and Joseph Chaikin, the play was an early expression of the burgeoning 1960s counterculture, expressing discontent with American consumerism and involvement in the Vietnam War. America Hurrah consists of three one-act plays: "Interview"; "TV"; and "Motel".

Alvin Epstein was an American actor and director. He was a founding member of both the American Repertory Theater and Yale Repertory Theatre. He was particularly admired for his performances in the plays of Samuel Beckett. He also served as Artistic Director at the Guthrie Theater.