Joseph Henry Maiden ISO (25 April 1859 – 16 November 1925) was a botanist who made a major contribution to knowledge of the Australian flora, especially the genus Eucalyptus . This botanist is denoted by the author abbreviation Maiden when citing a botanical name. [1]

Joseph Maiden was born in St John's Wood in northwest London. He studied science at the University of London, but due to ill health he did not complete the course. As part of his treatment he was advised to take a long sea voyage, and so in 1880 he sailed for New South Wales. In 1881, Maiden was appointed first curator of the Technological Museum in Sydney (now the Powerhouse Museum), [2] remaining there until 1896. While there, he published an article in 1886 describing what he called "some sixteenth century maps of Australia". These were the so-called Dieppe maps, the Rotz (1547), the Harleian or Dauphin (mid-1540s), and the Desceliers (1550), photo-lithographic reproductions of which had been published by the British Museum in 1885. [3] He was much interested in the native plants, and in his early days was associated with the Rev. William Woolls in his botanical studies. After his first collection of plants were destroyed in a fire at the Garden Palace near Sydney Botanic Gardens in 1882, he amassed a new collection, which was housed in part of an exhibition hall in the Outer Domain, behind Sydney Hospital. [4] This collection formed the basis for his first book, The Useful Native Plants of Australia, published in 1889, [5] in which he acknowledged his debt to the work of Ferdinand von Mueller with whom he had been in correspondence. [6] [7] [8]

In 1890 he was appointed consulting botanist to the Department of Agriculture and in 1894 was made Superintendent of Technical Education. In 1892 he published a Bibliography of Australian Economic Botany. In 1896, Maiden was appointed Government Botanist and Director of the Botanic Gardens, succeeding Charles Moore, who had been one of his botanical mentors. [4] He immediately set about establishing the colony's first herbarium, as well as a museum, library and Sydney's first playground. [9] He had in the previous year brought out Part I of The Flowering Plants and Ferns of New South Wales, of which other parts appeared in this and in later years. Another valuable work, the Forest Flora of New South Wales, was published in parts between 1904 and 1924, and his Illustrations of New South Wales Plants began to appear in 1907. In 1909 Maiden published Sir Joseph Banks the "father of Australia". In 1916, in collaboration with Ernst Betche, he published A Census of New South Wales Plants, and in 1920 Maiden published Part I of The Weeds of New South Wales. [6] [10]

Maiden became the recognised authority on Acacia and Eucalyptus . He published about 45 papers, and his eight-volume A Critical Revision of the Genus Eucalyptus remained a major reference for over fifty years. [11] He induced his co-author, the artist Margaret Flockton, to delay her retirement for five years to complete the illustrations. He was the author of numerous species and the collector of type material for many more. [6] His other interests included reducing sand erosion, promoting wattle cultivation for the tanning industry, and control (or use) of prickly pear. [4] He served as secretary of the (Royal) Geographical Society of Australasia, lectured in agricultural botany and forestry at the University of Sydney, and was a trustee of the Rookwood Church of England Cemetery. He was an active office-bearer in the Royal and Linnean societies of New South Wales, the (Royal) Australian Historical Society, the Wattle Day League, the Horticultural Society and Horticultural Association, the Field Naturalists' Society, the Town Planning Association of New South Wales, and the Australasian Association for the Advancement of Science. [4]

Joseph Maiden retired in 1924, and died at Turramurra, Sydney. [7] Eucalyptus maidenii is named in his honour. He was also appointed a Companion of the Imperial Service Order in 1916. [4]

The standard author abbreviation Maiden is used to indicate this person as the author when citing a botanical name. [12]

George Caley was an English botanist and explorer, active in Australia for the majority of his career.

Eucalyptus microcarpa, commonly known as grey box, is a species of tree that is endemic to southeastern continental Australia. It has rough, fibrous or flaky bark on the trunk, smooth whitish bark above, lance-shaped adult leaves, flower buds in groups of between seven and eleven, white flowers and oval, cylindrical or urn-shaped fruit. 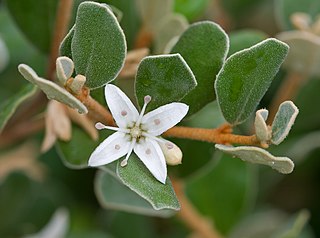 Correa alba, commonly known as white correa, is a species of shrub that is endemic to south-eastern Australia. It has egg-shaped to more or less circular leaves, erect white flowers arranged singly or in groups on short side branches, and green fruit. 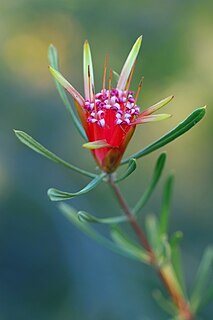 Lambertia formosa, commonly known as mountain devil, is a shrub of the family Proteaceae, endemic to New South Wales, Australia. First described in 1798 by English botanist James Edward Smith, it is the type species of the small genus Lambertia. It is generally found in heathland or open forest, growing in sandstone-based soils. It grows as a multistemmed shrub to around 2 m (7 ft) with a woody base known as a lignotuber, from which it regrows after bushfire. It has stiff narrow leaves, and the pink to red flowerheads, made up of seven individual tubular flowers, generally appear in spring and summer. It gains its common name from the horned woody follicles, which were used to make small devil-figures.

Eucalyptus nitens, commonly known as shining gum or silvertop, is a species of tall tree native to Victoria and eastern New South Wales. It has smooth greyish bark, sometimes with thin, rough bark near the base, lance-shaped adult leaves, flower buds in groups of seven or nine, white flowers and cup-shaped, barrel-shaped or cylindrical fruit. It grows in wet forests and rainforest margins on fertile soils in cool, high-rainfall areas.

Margaret Lilian Flockton, was an Australian botanical artist, particularly noted for her illustrating of "The Forest Flora of New South Wales", "A Critical Revision of the Genus Eucalyptus", and the genus Opuntia, all by the botanist and forester, Joseph Henry Maiden. She was the first botanical illustrator at the Royal Botanic Gardens in Sydney.

Eucalyptus odorata, commonly known as peppermint box, is a species of mallee or a small tree that is endemic to South Australia. It has rough, hard bark on the trunk and larger branches, smooth greyish bark on the thinner branches, lance-shaped adult leaves, flower buds in groups of between seven and eleven, white flowers and cylindrical or barrel-shaped fruit.

Eucalyptus deanei, commonly known as mountain blue gum, round-leaved gum, or Deane's gum, is a species of large tree endemic to New South Wales. It has smooth bark, lance-shaped leaves that are paler on the lower surface, flower buds in groups of seven to eleven, white flowers and cup-shaped to bell-shaped fruit.

Eucalyptus blakelyi, known as Blakely's red gum, is a tree endemic to eastern Australia. It has smooth bark on its trunk and branches, dull bluish green, lance-shaped adult leaves, flower buds usually in groups of seven, white flowers and cup-shaped to hemispherical fruit.

George Chippendale was an Australian botanist and a strong proponent of growing Australian Native plants. As well as a career in botany, he also taught his love of botany to all who would listen through talks to children, special interest groups, walks on Canberra'a Black Mountain and more recently through the U3A, both in class and online. He knew the value of planting local native plants in gardens as they would survive local conditions and save water. 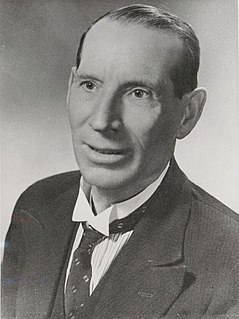 William Faris Blakely was an Australian botanist and collector. From 1913 to 1940 he worked in the National Herbarium of New South Wales, working with Joseph Maiden on Eucalyptus, Maiden named a red gum in his honour, Eucalyptus blakelyi. His botanical work centred particularly on Acacias, Loranthaceae and Eucalypts.

Acacia flocktoniae is a shrub species that is endemic to Australia.

Eucalyptus glaucescens, commonly known as the Tingiringi gum or Tingaringy gum, is a plant in the myrtle family Myrtaceae and is endemic to south-eastern Australia. It is a tree or mallee with smooth bark and dull greyish foliage growing in the higher parts of southern New South Wales and Victoria.

Lomatia myricoides, commonly known as the river lomatia, is a shrub native to New South Wales and Victoria in southeastern Australia.

Eucalyptus bancroftii, commonly known as Bancroft's red gum or orange gum, is a species of tree that is endemic to eastern Australia. It has smooth bark, lance-shaped or curved adult leaves, flower buds usually arranged in groups of seven, white flowers and cup-shaped, conical or hemispherical fruit. 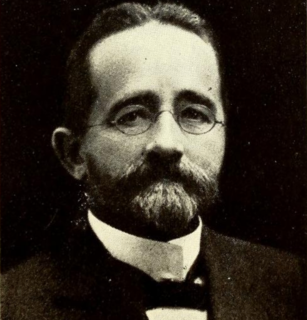 Daniel Ludwig Ernst Betche was a German-Australian horticulturist and botanist. 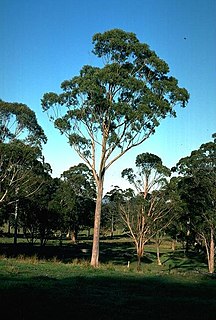 Eucalyptus andrewsii, commonly known as the New England blackbutt, is a tree native to New South Wales and Queensland in eastern Australia. It is a tree with rough bark on the trunk and larger branches, lance-shaped often curved leaves, flower buds in groups of between eleven and fifteen and hemispherical or cup-shaped fruit. 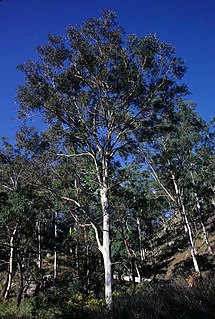 Eucalyptus major, commonly known as grey gum, is a species of tree that is endemic to a small area near the New South Wales - Queensland border. It has smooth greyish bark, lance-shaped adult leaves, flower buds in groups of seven and conical to cup-shaped fruit.

The following sources were not consulted in the writing of this article: