Josephine Pullare Terranova (April 21, 1889, in San Stefano, Sicily, Italy – July 16, 1981, in Marin County, California) was the defendant in a sensational murder trial in New York City in 1906. [1] After years of alleged sexual abuse at the hands of her aunt and uncle, the 17-year-old Terranova stabbed the pair to death. A jury acquitted her in what was widely regarded as an act of jury nullification. [2]

She later settled in the San Francisco Bay Area, allegedly with the financial assistance of William Randolph Hearst. [3] [4] She died in Marin County, California in 1981, aged 92.

The case was a major national news story at the time, leading to a widespread public debate on the proper role of psychiatric expertise in judicial proceedings.[ citation needed ]

In the early hours of March 13, 1964, 28-year-old Kitty Genovese was stabbed outside the apartment building across the street from where she lived, in an apartment above a row of shops on Austin Street, in the Kew Gardens neighborhood of Queens in New York City. Two weeks after the murder, The New York Times published an article claiming that 38 witnesses saw or heard the attack, and that none of them called the police or came to her aid. 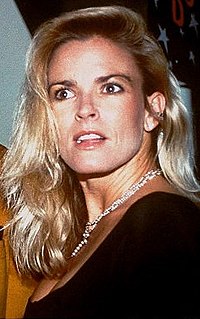 Nicole Brown Simpson was the ex-wife of former professional American football player O. J. Simpson, to whom she was married from 1985 to 1992, and the mother of their two children, Sydney and Justin.

Susan Denise Atkins was an American convicted murderer who was a member of Charles Manson's "Family". Manson's followers committed a series of nine murders at four locations in California, over a period of five weeks in the summer of 1969. Known within the Manson family as Sadie Mae Glutz or Sexy Sadie, Atkins was convicted for her participation in eight of these killings, including the most notorious, the Tate murders in 1969. She was sentenced to death, which was subsequently commuted to life imprisonment when the California Supreme Court invalidated all death sentences issued prior to 1972. Atkins was incarcerated until her death in 2009. At the time of her death, she was California's longest-serving female inmate, long since surpassed by her fellow murderous Manson family members Leslie Van Houten and Patricia Krenwinkel. 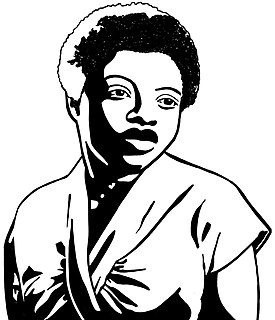 Joan Little is an African-American woman whose trial for the 1974 murder of Clarence Alligood, a white prison guard at Beaufort County Jail in Washington, North Carolina, became a cause célèbre of the civil rights, feminist, and anti-death penalty movements. Little was the first woman in United States history to be acquitted using the defense that she used deadly force to resist sexual assault. Her case also has become classic in legal circles as a pioneering instance of the application of scientific jury selection.

Larry Davis or, since 1989, Adam Abdul-Hakeem was an American man, convicted in 1991 of a drug dealer's 1986 murder, known for his 1986 shootout in the Bronx with police, in which six officers were shot. Davis, asserting self-defense, was acquitted of all charges aside from illegal gun possession. In 2008, he died via stabbing by a fellow inmate.

Stephen Mitchell Bingham is an American legal services and civil rights attorney who was tried and acquitted in 1986 for his alleged role in Black Panther George Jackson's attempted escape fifteen years earlier from San Quentin State Prison in Marin County, California, in 1971.

The Soledad Brothers were three African-American inmates charged with the murder of a white prison guard, John Vincent Mills, at California's Soledad Prison on January 16, 1970. George Jackson, Fleeta Drumgo, and John Clutchette were alleged to have murdered Mills in retaliation for the shooting deaths of three black prisoners during a prison fight in the exercise yard three days prior by another guard, Opie G. Miller.

The Oklahoma Girl Scout murders is an unsolved murder case that occurred on the morning of June 13, 1977, at Camp Scott in Mayes County, Oklahoma, United States. The victims were three girl scouts, between the ages of 8 and 10, who were raped and murdered. Their bodies had been left on a trail leading to the showers, about 150 yards from their tent at summer camp. The case was classified as solved when Gene Leroy Hart, a local jail escapee with a history of violence, was arrested. However, he was acquitted when he stood trial for the crime.

The San Quentin Six were six inmates at San Quentin State Prison in the U.S. state of California, who were accused of participating in an August 21, 1971 escape attempt that left six people dead, including George Jackson, a co-founder of the Black Guerrilla Family. 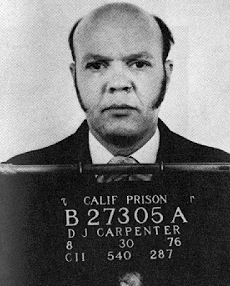 David Joseph Carpenter, a.k.a. The Trailside Killer, is an American serial killer and serial rapist known for stalking and murdering a variety of individuals on hiking trails in state parks near San Francisco, California. Carpenter killed at least ten individuals, with two attempted victims, Steven Haertle and Lois Rinna, the mother of The Real Housewives of Beverly Hills star Lisa Rinna, surviving. He used a .38 caliber handgun in all but one of the killings; a .44 caliber handgun was used in the killing of Edda Kane on Mount Tamalpais.

Maria del Rosio "Rosie" Alfaro is an American woman convicted of the 1990 murder of 9-year-old Autumn Wallace in Anaheim, California. She is currently on California's death row. 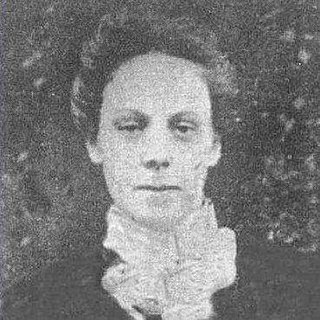 The Peasenhall murder is a notorious unsolved murder committed in Peasenhall, Suffolk, England, on the night of 31 May 1902. The house where the murder occurred can be found in the centre of the village, on the opposite corner to Emmett's Store. It is a classic 'unsolved' country house murder, committed near midnight, during a thunderstorm, and with many ingredients of mystery. 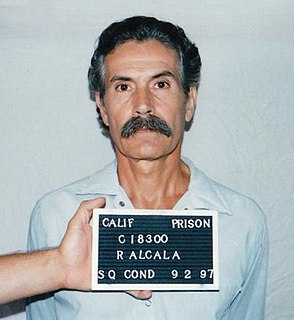 Rodney James Alcala is an American convicted rapist and serial killer who was sentenced to death in California for five murders committed in that state between 1977 and 1979, and received an additional sentence of 25 years to life after pleading guilty to two homicides committed in New York in 1971 and 1977. Alcala's true victim count remains unknown, and could be much higher.

Michael Thomas Gargiulo is a convicted American serial killer and rapist. He moved to Southern California in the 1990s and has been nicknamed The Hollywood Ripper.

This is a list of notable overturned convictions in Canada.

Joseph Naso is an American serial killer sentenced to death for the murder of six women.

The barbecue murders, also known as the BBQ murders, refers to a 1975 double murder in Marin County, California. Business consultant James "Jim" Olive and his wife Naomi were murdered in their home by their 16-year-old adopted daughter Marlene Olive and her 20-year-old boyfriend Charles "Chuck" Riley, who then attempted to dispose of the bodies by burning them in a barbecue pit at a nearby campground. Riley was convicted of two counts of first-degree murder and received a sentence of death, which was later changed to life imprisonment with the possibility of parole. Marlene Olive, tried as a juvenile, received a sentence of three to six years in a California Youth Authority juvenile facility, from which she was released at age 21 having served a little over four years.