Journey Beneath the Desert

Journey Beneath the Desert (Italian : Antinea, l'amante della città sepolta) is a 1961 adventure film based on the novel Atlantida by Pierre Benoit. [1] [2]

Frank Borzage was slated to direct the film and began production but left due to an illness and was replaced with Edgar G. Ulmer. [2]

Atlantida is a fantasy novel by French writer Pierre Benoit, published in February 1919. It was translated into English in 1920 as Atlantida. L'Atlantide was Benoit's second novel, following Koenigsmark, and it won the Grand Prize of the French Academy. The English translation of Atlantida was first published in the United States as a serial in Adventure magazine.

Umberto Lenzi was an Italian film director, screenwriter, and novelist. 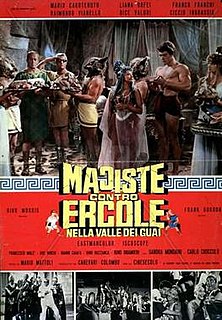 Hercules in the Valley of Woe, aka Hercules in the Vale of Woe, is a 1961 Italian Franco & Ciccio comedy film directed by Mario Mattoli and starring Kirk Morris as Maciste and Frank Gordon as Hercules. The film is a comical take on the popular sword-and-sandal epics of the 1950s and 1960s.

Hercules the Avenger is a 1965 Italian adventure film directed by Maurizio Lucidi. It was composed mostly of re-edited stock footage from Reg Park's two 1961 Hercules films, Hercules at the Conquest of Atlantis and Hercules in the Haunted World.

Hercules and the Conquest of Atlantis is a 1961 film directed by Vittorio Cottafavi and starring Reg Park in his film debut as Ercole/Hercules. It was originally released in Super Technirama 70.

Devil of the Desert Against the Son of Hercules is a 1964 international co-production filmed in Algeria and directed by Antonio Margheriti.

The Trojan Horse is a 1961 film set in the tenth and final year of the Trojan War. The film focuses primarily on the exploits of the Trojan hero Aeneas during this time. The film was directed by Giorgio Ferroni and stars Steve Reeves as Aeneas and John Drew Barrymore as Odysseus.

The Pirate of the Black Hawk is a 1958 international co-production film starring Brigitte Bardot's sister Mijanou Bardot. The film was an co-production between Italy's Emmepi Cinematografica and France's Comptoir Français du Productions.

Goliath and the Vampires is a 1961 Italian peplum film directed by Sergio Corbucci and Giacomo Gentilomo.

Amazons of Rome is a 1961 peplum film. During production, tensions brewed between Louis Jourdan and director Vittorio Cottafavi which led to Cottafavi being replaced with Carlo Ludovico Bragaglia.

Guns of the Black Witch is a 1961 adventure film directed by Domenico Paolella. 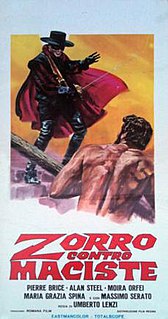 Samson and the Slave Queen is a 1963 Italian peplum directed by Umberto Lenzi. It was originally made as a Maciste film in Italy, in which the fabled strongman meets Zorro. It was redubbed into a "Samson" movie for distribution in the U.S. and "Samson" meets "El Toro"

The Invincible Masked Rider is a 1963 adventure film directed by Umberto Lenzi. It was based on a novel by Johnston McCulley. The film was released in the US as Terror of the Black Mask.

Long Live Robin Hood is a 1971 swashbuckler film directed by Giorgio Ferroni. It is based on the Robin Hood legend. It also has been known under its translated Italian name Archer of Fire.

The Bacchantes is a 1961 adventure-fantasy film directed by Giorgio Ferroni. It is loosely based on the Euripides' tragedy The Bacchae.

The Fall of Rome is a 1963 Italian peplum film written and directed by Antonio Margheriti. 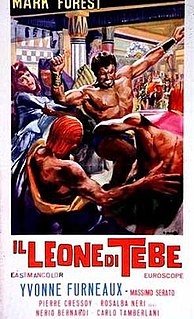 The Lion of Thebes is a peplum film written and directed by Giorgio Ferroni.

Queen of the Seas is a 1961 adventure film directed by Umberto Lenzi and starring Lisa Gastoni and Jerome Courtland.