Juan E. Méndez (born December 11, 1944) is an Argentine lawyer, former United Nations Special Rapporteur on Torture and Other Cruel, Inhuman or Degrading Treatment or Punishment, [1] and human rights activist known for his work on behalf of political prisoners.

Méndez was born in Lomas de Zamora, on the outskirts of Buenos Aires. [2] In 1970, he received his law degree from Stella Maris University in Mar del Plata, Buenos Aires province. [3]

Early in his career, he became involved in representing political prisoners. As a result, he was arrested by the Argentine military dictatorship and subjected to torture and administrative detention for 18 months. During this period, Amnesty International adopted him as a "Prisoner of Conscience," and in 1977, he was expelled from the country and moved to the United States. [4]

Subsequently, Mendez worked for the Catholic Church in Aurora, Illinois, protecting the rights of migrant workers. In 1978, he joined the Lawyers' Committee for Civil Rights under the Law in Washington, D.C., and in 1982, he launched Human Rights Watch's (HRW) Americas Program. He continued to work at Human Rights Watch for 15 years, becoming their general counsel in 1994. [3] He is also a visiting scholar at American University Washington College of Law's Academy on Human Rights and Humanitarian Law, a Professor of Human Rights Law in Residence at the Washington College of Law, and the Faculty Director of the Anti-Torture Initiative at the law school.

From 1996 to 1999, Mendez served as the Executive Director of the Inter-American Human Rights Institute, based in Costa Rica. [2] He then worked as a Professor of Law and Director of the Center for Civil and Human Rights at the University of Notre Dame in the United States from October 1999 to 2004. [5]

In 2001, Mendez began working for the International Center for Transitional Justice (ICTJ), an international human rights NGO. He served as its president from 2004 to 2009 and now is its President Emeritus. From November 2010 to October 31, 2016, he was the UN Special Rapporteur on Torture. [1]

Mendez has taught human rights law at Georgetown Law School, the Johns Hopkins School of Advanced International Studies, and the University of Oxford Masters Program in International Human Rights Law in the UK.

Mendez is on the Steering Committee of The Crimes Against Humanity Initiative, a rule of law project launched in 2008 by the Whitney R. Harris World Law Institute to study the need for a comprehensive convention on the prevention and punishment of crimes against humanity, analyze the necessary elements of such a convention, and draft a proposed treaty. [6] The proposed treaty is now being debated before the UN International Law Commission. [7] [8]

He has received numerous awards for his work, including the Goler T. Butcher Medal from the American Society of International Law; a Doctorate Honoris Causa from the Université du Québec à Montréal (University of Quebec in Montreal); the "Monsignor Oscar A. Romero Award for Leadership in Service to Human Rights" by the University of Dayton; the "Jeanne and Joseph Sullivan Award" of the Heartland Alliance.; [9] the Doctorate Honoris Causa from the Universidad Nacional de La Plata, Argentina (National University of La Plata), June 10, 2013; [10] and the Letelier-Moffitt Human Rights Award from the Institute for Policy Studies in 2014. [11]

Geoffrey D. Miller is a retired United States Army Major General who commanded the US detention facilities at Guantanamo Bay, Cuba, and Iraq. Detention facilities in Iraq under his command included Abu Ghraib prison, Camp Cropper, and Camp Bucca. He is noted for having trained soldiers in using torture, or "enhanced interrogation techniques" in US euphemism, and for carrying out the "First Special Interrogation Plan," signed by the Secretary of Defense, against a Guantanamo detainee.

Mahmoud Cherif Bassiouni was an Emeritus Professor of Law at DePaul University where he taught from 1964 to 2012. He served in numerous United Nations positions and served as the consultant to the US Department of State and Justice on many projects. He was a founding member of the International Human Rights Law Institute at DePaul University which was established in 1990. He served as president from 1990 to 1997 and then as president emeritus. Bassiouni is often referred to by the media as “the Godfather of International Criminal Law” and a “war crimes expert.” As such, he served on the Steering Committee for The Crimes Against Humanity Initiative, which was launched to study the need for a comprehensive convention on the prevention and punishment of crimes against humanity, and draft a proposed treaty. He spearheaded the drafting of the proposed convention, which as of 2014 is being debated at the International Law Commission.

Fausto Pocar is an Italian jurist. He is professor emeritus of International Law at the University of Milan, where he also taught Private International Law and European Law, and where he served many years as Faculty Dean and Vice-Rector. From 1984-2000, he was an elected member of the Human Rights Committee of the United Nations, serving as the committee's chair from 1991-92. 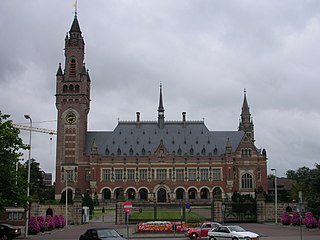 Command responsibility, sometimes referred to as the Yamashita standard or the Medina standard, and also known as superior responsibility, is the legal doctrine of hierarchical accountability for war crimes.

Claudio Mauricio Grossman Guiloff is a lawyer and law professor. From 1995 until the summer of 2016, he served as dean of the Washington College of Law of American University in Washington, D.C. He continues to teach at the Washington College of Law and serve as Dean Emeritus. In November 2016, he was elected to the United Nations International Law Commission for a five-year term. Grossman has also served as vice chair of the United Nations Committee Against Torture (2003-2008) and as Chairperson (2008-2015). He is a former member of the Inter-American Commission on Human Rights (1993-2001). He was twice elected its president, first in 1996 and again in 2001. He was the IACHR's first Special Rapporteur on the Rights of Women (1996-2000), as well as its Special Rapporteur on the Rights of Indigenous Populations (2000-2001).

José "Pepe" Zalaquett Daher was a Chilean lawyer, renowned for his work in the defence of human rights during the de facto regime that governed Chile under General Augusto Pinochet from 1973 to 1990.

The Permanent Assembly for Human Rights is an Argentine non-governmental human rights organization; founded in 1975. According to its official website the organization is the product of a "call from people coming from distinct areas: the church, politics, Human Rights, sciences, culture, and labour Argentinians in response to the increasing violence and the collapse of the most elemental Human Rights in the country".

Antônio Augusto Cançado Trindade is a Brazilian judge on the International Court of Justice, based in The Hague, Netherlands, a position he has held since 6 February 2009. Cançado Trindade is a professor at Utrecht University's Netherlands Institute of Human Rights (SIM). He was reelected to the Court in December 2017, and took office for his second term on 6 February 2018.

Payam Akhavan is an international lawyer and professor at McGill University in Montreal. He is a Member of the Permanent Court of Arbitration at The Hague and a designated arbitrator/conciliator at the International Centre for Settlement of Investment Disputes (ICSID) of the World Bank Group. He was previously Legal Advisor to the Office of the Prosecutor of the International Criminal Tribunal for the former Yugoslavia at the Hague and Special Advisor to the International Criminal Tribunal for Rwanda, the Historical Clarification Commission for Guatemala, the UN Transitional Authority in East Timor, the Khmer Rouge Tribunal Task Force of the Royal Government of Cambodia, and the Fujimori Investigative Commission of the Peruvian Congress. He also served as UN human rights officer in Bosnia-Herzegovina and Croatia during the Yugoslav war and was appointed to missions of the Organization for Security and Cooperation in Europe (OSCE) by the European Community Presidency. He has served as legal counsel in cases before the International Court of Justice, the International Criminal Court, the European Court of Human Rights, and the Supreme Courts of Canada and the United States. Akhavan currently acts as Senior Fellow to the Raoul Wallenberg Centre for Human Rights.

The Center for Human Rights and Humanitarian Law at American University Washington College of Law (WCL) was founded in 1990 as a way to coordinate all the human rights and humanitarian law activities at WCL. The Center’s objective is “to work with students, faculty and the international legal community to provide scholarship and support for human rights initiatives around the world.”.

The Whitney R. Harris World Law Institute at Washington University School of Law, established in 2000 as the Institute for Global Legal Studies, serves as a center for instruction and research in international and comparative law.

The Republic of Uruguay is located in South America, between Argentina, Brazil and the South Atlantic Ocean, with a population of 3,332,972. Uruguay gained independence and sovereignty from Spain in 1828 and has full control over its internal and external affairs. From 1973-85 Uruguay was governed by a civil-military dictatorship which committed numerous human rights abuses.

Mónica Feria Tinta is a leading public international lawyer at the Bar of England & Wales. She practises as a barrister from Twenty Essex Chambers. "The Lawyer" magazine featured her in its "Hot 100" 2020 list, as amongst “the most daring, innovative and creative lawyers” in the United Kingdom. In 2000 she became the first and only Peruvian-born lawyer to receive the Diploma of The Hague Academy of International Law in history, the year Professor Pierre-Marie Dupuy delivered the General Course. Her litigation work led to the first international human rights court decision ordering the prosecution of a former Head of State for crimes under international law. In 2006 she was awarded the Inge Genefke International Award for her work as an international lawyer and in 2007 she became the youngest lawyer to be awarded the Gruber Justice Prize, for her contributions advancing the cause of justice as delivered through the legal system; an honour she received at a ceremony chaired by US Supreme Court Justice Ruth Bader Ginsburg in Washington DC.

Intersex people in Argentina have no recognition of their rights to physical integrity and bodily autonomy, and no specific protections from discrimination on the basis of sex characteristics. Cases also exist of children being denied access to birth certificates without their parents consenting to medical interventions. The National Institute Against Discrimination, Xenophobia and Racism and civil society organizations such as Justicia Intersex have called for the prohibition of unnecessary medical interventions and access to redress.