The Julian Alps (Slovene : Julijske Alpe, Italian : Alpi Giulie, Venetian : Alpe Jułie, Friulian : Alps Juliis) are a mountain range of the Southern Limestone Alps that stretch from northeastern Italy to Slovenia, where they rise to 2,864 m at Mount Triglav, the highest peak in Slovenia and of the former Yugoslavia. A large part of the Julian Alps is included in Triglav National Park. The second highest peak of the range, the 2,755 m high Jôf di Montasio, lies in Italy. [1]

The Julian Alps cover an estimated 4,400 km2 (of which 1,542 km2 lies in Italy). They are located between the Sava Valley and Canale Valley. They are divided into the Eastern and Western Julian Alps.

The Julian Alps were known in antiquity as Alpe Iulia, and also attested as Alpes Julianac. AD 670, Alpis Juliac. 734, and Alpes Iulias in 1090. [2] Like the municipium of Forum Julii (now Cividale del Friuli) at the foot of the mountains, the range was named after Julius Caesar of the Julian clan, [2] [3] perhaps due to a road built by Julius Caesar and completed by Augustus. [4]

There are many peaks in the Eastern Julian Alps over 2,000 m high, and they are mainly parts of ridges. The most prominent peaks are visible by their height and size. There are high plains on the eastern border like Pokljuka, Mežakla and Jelovica.

The main peaks by height are the following:

The Western Julian Alps cover a much smaller area, and are located mainly in Italy. Only the Kanin group lies in part in Slovenia. The main peaks by height are:

Important passes of the Julian Alps are: 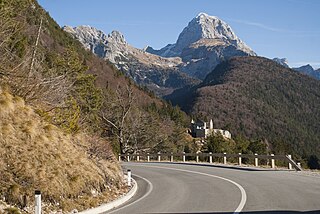 Mount Jalovec is a mountain in the Julian Alps. With an elevation of 2,645 m, it is the sixth-highest peak in Slovenia. It stands between the Tamar, Koritnica, and Trenta Alpine valleys. Nearby peaks include Mangart to the west, Travnik and Mojstrovka to the east, and Ponce to the north. The Log Cliff stands immediately southwest of Mount Jalovec. 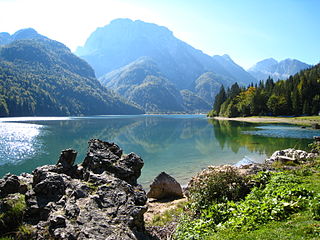 Ernesto Luigi Lomasti was an Italian mountaineer and alpino skier. He is regarded as one of the Italian pioneers of climbing as a sport. He died during training in the Valle d'Aosta, Arnad, in the local alpini training place called "la gruviera", he fell apparently being struck by lightning. Ironically, he is also remembered for techniques on the Machaby pillar, in Arnaud, in May 1979. The pillar today is named Lomasti pillar.

Razor is a pyramidal mountain in the Julian Alps and the sixth-highest mountain in Slovenia. First ascended by Otto Sendtner in 1842, it is now frequently ascended, with numerous mountain huts available for climbers. 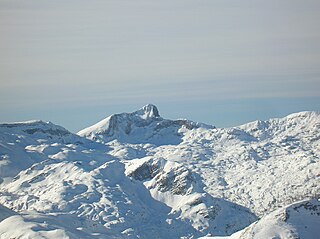 Krn is a mountain of the southwestern Julian Alps in northwestern Slovenia. It is the highest mountain of the Krn Mountains. The mountain is located about 50 kilometres (31 mi) from the Adriatic Sea. The Soča River flows west of the peak, and the smaller Lepenjica River northeast and the Tolminka River southwest of it. Krn has a mighty western wall, which can be best seen from Kobarid or Drežnica.

Mangart Saddle or the Mangart Pass is a mountain saddle in the Julian Alps in northwestern Slovenia. It has an elevation of 2,072 metres (6,798 ft). It is the most common starting point for the ascent of Mt. Mangart. The Mangart Road that leads over Mangart Saddle, with its elevation of 2,055 m (6,742 ft), has a number of turns and is the highest-lying road in Slovenia. It was built in 1938. The Mangart Pass offers a picturesque view towards the Log Koritnica Valley in Slovenia to the south and the Lakes of Fusine in Italy to the north. The Mangart Saddle Lodge lies under the saddle. The saddle was the scenery of the film Let's Go Our Own Way. Mangart Saddle is also known as the finding place of manganese nodules from the Early Jurassic period.

Jôf Fuart is a mountain of the Julian Alps in Friuli-Venezia Giulia, Italy.