(David) Julian (Harry) Downward[ clarification needed ] (born 25 October 1960) [1] FRS FMedSci is Associate Research Director at the  Francis Crick Institute and Senior Group Leader at the Institute of Cancer Research. [3] He was formerly head of the Signal transduction Laboratory at the London Research Institute. [4] [5] [6] [2] He is a member of the Editorial Board for Cell . [7]

Downward was educated at Eton College and earned a first class Bachelor of Arts degree in Natural Sciences from Clare College, Cambridge. [1] His PhD was supervised by Michael Waterfield at the Imperial Cancer Research Fund where he investigated Epidermal growth factor receptor, establishing in 1984 the close similarity between this cellular growth regulatory protein and the avian retroviral oncogene, v-erbB. [8] This work led to the identification of the closely related cellular oncogene ErbB2/HER2, which is over-expressed in a major subset of breast cancers and is the target of the important targeted therapy, trastuzumab. [9] From 1986 to 1989, he was a postdoctoral researcher with Robert Weinberg, at the Whitehead Institute for biomedical research at the Massachusetts Institute of Technology. [10] [11]

Downward's research investigates cancer biology. His work on the Ras GTPase has made seminal contributions to our understanding of how cellular signal transduction pathways are subverted in oncogenic transformation. His work provided the first demonstration that Guanosine triphosphate-loading on Ras, which is commonly mutationally activated in human tumours, is normally regulated in response to extracellular factors; he went on to characterise growth factor receptor complexes mediating Ras nucleotide exchange, and to demonstrate that GTP-bound Ras binds to and activates the RAF kinase, which controls the mitogen-activated protein kinase pathway. Julian was first to demonstrate that phosphoinositide 3-kinase (PI 3-kinase) is also a Ras effector, important in regulation of apoptosis. He showed that transformation by Ras requires interaction with multiple effectors, which contribute differentially to cell cycle progression, cytoskeletal regulation and apoptosis. His work has established that both cell matrix and cell–cell interaction activate the PI 3-kinase/PKB pathway, and thereby prevent programmed cell death, and that it is activation of this pathway by oncogenic Ras that allows anchorage-independent growth of transformed cells. [3] [12] Most recently he has focused on identifying unique weaknesses of cancer cells expressing the activated Ras oncogene using a combination of large-scale functional genomics and pre-clinical models of lung cancer.

An oncogene is a gene that has the potential to cause cancer. In tumor cells, these genes are often mutated, or expressed at high levels.

A tyrosine kinase is an enzyme that can transfer a phosphate group from ATP to the tyrosine residues of specific proteins inside a cell. It functions as an "on" or "off" switch in many cellular functions.

Ras, from "Rat sarcoma virus", is a family of related proteins that are expressed in all animal cell lineages and organs. All Ras protein family members belong to a class of protein called small GTPase, and are involved in transmitting signals within cells. Ras is the prototypical member of the Ras superfamily of proteins, which are all related in three-dimensional structure and regulate diverse cell behaviours.

A mitogen is a peptide or small protein that induces a cell to begin cell division: mitosis. Mitogenesis is the induction (triggering) of mitosis, typically via a mitogen. The mechanism of action of a mitogen is that it triggers signal transduction pathways involving mitogen-activated protein kinase (MAPK), leading to mitosis. 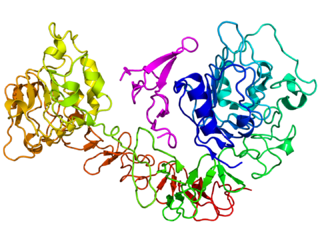 c-Met, also called tyrosine-protein kinase Met or hepatocyte growth factor receptor (HGFR), is a protein that in humans is encoded by the MET gene. The protein possesses tyrosine kinase activity. The primary single chain precursor protein is post-translationally cleaved to produce the alpha and beta subunits, which are disulfide linked to form the mature receptor. 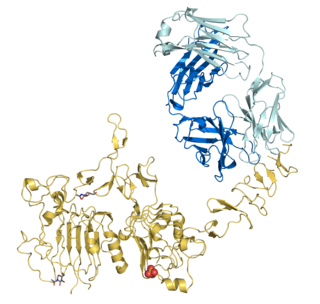 Receptor tyrosine-protein kinase erbB-2, also known as CD340, proto-oncogene Neu, Erbb2 (rodent), or ERBB2 (human), is a protein that in humans is encoded by the ERBB2 gene. ERBB is abbreviated from erythroblastic oncogene B, a gene isolated from avian genome. It is also frequently called HER2 or HER2/neu.

The MAPK/ERK pathway is a chain of proteins in the cell that communicates a signal from a receptor on the surface of the cell to the DNA in the nucleus of the cell.

Growth factor receptor-bound protein 2 also known as Grb2 is an adaptor protein involved in signal transduction/cell communication. In humans, the GRB2 protein is encoded by the GRB2 gene.

The ErbB family of proteins contains four receptor tyrosine kinases, structurally related to the epidermal growth factor receptor (EGFR), its first discovered member. In humans, the family includes Her1, Her2, Her3 (ErbB3), and Her4 (ErbB4). The gene symbol, ErbB, is derived from the name of a viral oncogene to which these receptors are homologous: erythroblastic leukemia viral oncogene. Insufficient ErbB signaling in humans is associated with the development of neurodegenerative diseases, such as multiple sclerosis and Alzheimer's disease, while excessive ErbB signaling is associated with the development of a wide variety of types of solid tumor.

Receptor tyrosine-protein kinase erbB-3, also known as HER3, is a membrane bound protein that in humans is encoded by the ERBB3 gene.

Receptor tyrosine-protein kinase erbB-4 is an enzyme that in humans is encoded by the ERBB4 gene. Alternatively spliced variants that encode different protein isoforms have been described; however, not all variants have been fully characterized.

Fibroblast growth factor receptor substrate 2 is a protein that in humans is encoded by the FRS2 gene.

Trk receptors are a family of tyrosine kinases that regulates synaptic strength and plasticity in the mammalian nervous system. Trk receptors affect neuronal survival and differentiation through several signaling cascades. However, the activation of these receptors also has significant effects on functional properties of neurons.

ERBB receptor feedback inhibitor 1 is a protein that in humans is encoded by the ERRFI1 gene. 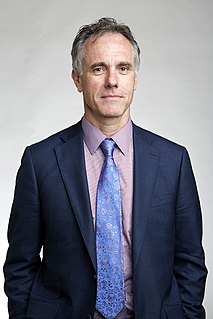 Richard Malcolm Marais is Director of the Cancer Research UK (CRUK) Manchester Institute and Professor of Molecular Oncology at the University of Manchester.