Filipowicz was born on 13 September 1895 in Lemberg, in the family of Antoni and Justyna Derpowska. He was the brother of Paweł Piotr  [ pl ] and Tadeusz Justyn  [ pl ], lieutenant colonels of artillery; in 1940 both would be victims of the Katyn massacre. [3]

After the outbreak of World War I, he joined the Polish Legions from August 1914 to July 1917, where he fought in the 1st Uhlans Regiment. From 5 February to 31 March 1917 he was a student of the cavalry officer course at the 1st Uhlans' regiment in Ostrołęka. He completed the course with a very good result. At that time, he had the rank of chief chief's. [5] On 23 July 1917, after the Oath crisis, [1] he became a member of the Polish Auxiliary Corps in Galicia. [4]

In September of the same year, he was arrested on suspicion of agitation and spent two months in a prison in Przemyśl. After his release, he was drafted into the 8th Uhlans of the Austrian Army, stationed in Transylvania. In June 1918 he was granted leave, then deserted and joined the Polish Military Organization in the Lublin region. [4]

During his stay in Lemberg in November 1918, he joined the unit of Captain Mieczysław Boruta-Spiechowicz as soon as the Polish–Ukrainian War broke out. On 15 November, he was promoted to the rank of second lieutenant. From December 1918 to May 1919, he served in the intelligence service of the 4th field artillery regiment on the Ukrainian front. In June, he was transferred to the 11th Legions Uhlan Regiment as a squadron commander in the Polish–Soviet War. Already in October, he was sent to the Officers' School of Driving, after graduating in April 1920, he became an instructor and liaison at the Ukrainian 6th Division. In July of the same year, he was promoted to the rank of lieutenant. In August, he returned to his home 11th Uhlans as a squadron commander. [4]

After the end of the war, he remained in the 11th Regiment as a squadron commander. From 15 August 1924, after being promoted to the rank of major, he was the commander of the NCO school in his regiment. During the May Coup, he sent the regiment to Warsaw in emergency mode, where he supported Piłsudski's units. [4] On 23 May 1927, he was appointed deputy regiment commander. [6] In the years 1928–1930 he was a student of the Wyższa Szkoła Wojenna in Warsaw. On 1 November 1930, after completing the course and obtaining a certified officer diploma, he was appointed commander of the 7th Lublin Uhlan Regiment in Mińsk Mazowiecki. [6] On 4 July 1935, he took command of the 3rd regiment of mounted rifles in Wołkowysk. [7]

In June 1939, he was entrusted with the command of the Wołyńska Cavalry Brigade in Równe. He led the brigade during the September Campaign, passing the combat route from Mokra through Warsaw to the Battle of Tomaszów Lubelski. [3]

On 23 September 1939, he disbanded the remnants of his unit and, in civilian clothes, made his way to Warsaw, where he joined the Polish Underground State in underground activities of the Service for Poland's Victory. At the beginning of 1940, he was arrested by the Gestapo and imprisoned in the Pawiak prison, from which he escaped on 10 May 1940, hidden in a garbage truck. [4]

After his escape and convalescence, he became the head of the Krakow District, which he commanded until March 1941 when he was re-arrested and imprisoned at Montelupich Prison, where he was tortured during interrogations. As he was tortured and unconscious, he was mistakenly pronounced dead and taken to the morgue, from which he escaped after regaining consciousness. [4] He contracted tuberculosis while in prison and while escaping, evacuated to Otwock where he was placed in a private guesthouse near a pulmonary sanatorium. Due to his inability to return to Krakow, he was appointed commander of the Białystok AK district. Due to serious illness, he did not manage to take up a new position; he was put on leave and transferred to the personnel reserve. On 15 August 1942, he was promoted to the rank of brigadier general at the request of the Commander-in-Chief of the Home Army. [4]

Before the Warsaw Uprising, he was appointed to the headquarters of the Home Army Headquarters, but he did not come because the Red Army entered. Due to the diseases he acquired, he developed lung cancer. He died on 14 August 1945 in Otwock [4] as a result of a tumor-induced hemorrhage and was buried at the local parish cemetery (sector V-15-353c). [1] [8] At the request of the Minister of National Defense, President of the Republic of Poland Andrzej Duda, by a decision of 11 July 2019, appointed him posthumously to the rank of Major General. [9]

Stanisław Grzmot-Skotnicki was a Polish military commander and a general of the Polish Army. During the invasion of Poland of 1939 he commanded the Czersk Operational Group and was among the highest ranking Polish officers to be killed in action in that war. 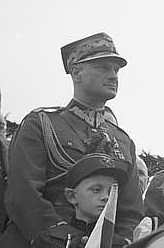 Roman Józef Abraham was a Polish cavalry general, commander of Wielkopolska Cavalry Brigade during German and Soviet Invasion of Poland in September 1939, in Battle of Bzura commander of Polish cavalry. During the Second Republic, he was Brigadier General and, for a short period – from 1930 to 1931 – Abraham was also a member of the Parliament.

Tadeusz Kutrzeba was a general of the army during the Second Polish Republic. He served as a major general in the Polish Army in overall command of Army Poznań during the 1939 German Invasion of Poland.

Franciszek Ksawery Latinik was a Polish military officer, Colonel of Austro-Hungarian Army and Major General of the Polish Army.

Józef Dwernicki was a General of Cavalry in the Polish Army, and a participant in the November Uprising (1830–1831).

Tadeusz Konstanty Anders served as a captain artillery officer in the Polish Army during the Interbellum Period, and as a podpułkownik in the Polish Armed Forces during World War II. He was awarded the Virtuti Militari V Class, Poland's highest military decoration for heroism and courage in the face of the enemy at war. 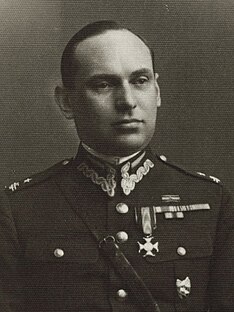 Karol Anders was a Colonel in the cavalry of the Polish Army, brother of Lt. General Władysław Anders and Colonel Tadeusz Anders, and double recipient of Poland's Virtuti Militari – IV and V Class.

Janusz Julian Głuchowski was a divisional general of the Polish Army in the Second Polish Republic. Born on August 6, 1888 in Bukowa, he fought in Polish Legions in World War I, Polish–Ukrainian War, Polish–Soviet War and the Invasion of Poland. Głuchowski died on June 11, 1964 in London. 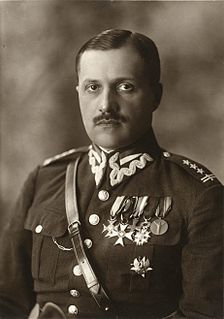 Zygmunt Podhorski was General brygady of the Polish Army. Born May 25, 1891, Podhorski fought in World War I, Polish–Soviet War and the Invasion of Poland. Altogether, he served in the military from 1914 until 1946.

Jan Berek was a soldier of the Austro-Hungarian Army and Generał brygady of the Polish Army, who fought in World War I, Polish–Soviet War and the Invasion of Poland. 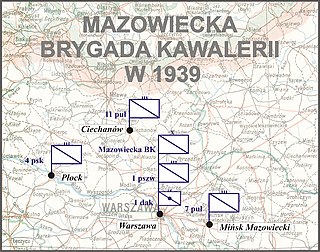 7th Lublin Uhlan Regiment of General Kazimierz Sosnkowski was a cavalry unit of the Polish Army in the Second Polish Republic and in the Polish Armed Forces in the West. Until 1939, it was garrisoned in Minsk Mazowiecki. The day of the regiment was on March 23, the anniversary of the decoration of its flag with the Virtuti Militari.

12th Podolian Uhlan Regiment was a cavalry unit of the Polish Army. It was officially formed in 1919, and existed in various forms until 1947. The regiment fought in Polish-Soviet War and World War II. In the Second Polish Republic, it was garrisoned in the village of Bialokrynica near Krzemieniec, Volhynia. The regiment was part of Wolynska Cavalry Brigade. 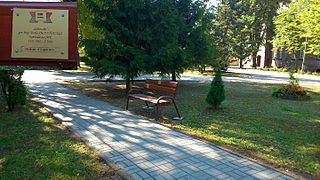 Józef Smoleński was a soldier of Polish Legions in World War I and General brygady of the Polish Army. He fought in World War I, Polish–Soviet War and World War II, serving in the military forces from 1914 until 1945.

Edmund Wacław Heldut - Tarnasiewicz alias " Heldut ". He was the senior colonel and commander of the Polish Army cavalry, a senior military officer of the Polish Armed Forces in the West, who received Poland's highest military award, the Virtuti Militari, one of the oldest military decorations in the world still in use. He was heavily involved in World War I, the Polish–Soviet War, and World War II. Heldut was promoted to General, but the promotion was never confirmed due to the outbreak of World War II.

Józef Werobej was a Polish infantry officer who served in the Imperial Russian Army and a colonel in the Polish Army appointed by the Polish authorities in exile as a brigadier general. Knight of the Order of Virtuti Militari.