Julian Howard Ashton (9 August 1877 – 30 April 1964), often referred to as Howard Ashton, was a journalist, writer, artist and critic born in England, who had a considerable career in Australia.

Ashton was born in Islington, London, a son of Julian Rossi Ashton and his wife Eliza Ann Pugh, who with their family moved to Melbourne in 1878, and Sydney five years later, where his father founded his famous art school.

Ashton became a junior shipping reporter of The Sydney Morning Herald but, two years later, he moved to Melbourne, where he was given the position of reporter by The Argus . He also drew portraits for the Sydney Daily Telegraph in his late teenage years and early adulthood. By his early twenties, Ashton had become a well-known figure in the local media and newspaper companies, writing music, literary and art reviews. He was given the title of music critic in 1910. Ashton was celebrated for his short stories in The Bulletin , following which success he began selling his paintings in art galleries, then began writing for British magazines such as Pall Mall Gazette and Chambers's Journal .

He became a respected and dedicated member of magazines and newspaper companies. He resumed his criticism of music, and other arts in 1926, when he was made an associate editor.

Ashton had never worked as a full-time artist; however despite this, in 1938 he won the Sydney sesquicentenary prize for landscape drawings. Ashton was, as well as an artist, a musician who had been known to entertain guests and lodgers at his Mosman house; it was because of this that the suggestion of forming the first Sydney String Quartet was put forward.

Ashton was an amateur entomologist specializing in cicadas. [1] [2]

Ashton died at age 86 in New South Wales and was cremated.

Ashton was the eldest child of artist Julian Rossi Ashton and Eliza Ann, née Pugh, his first wife. While attending his father's art school, Ashton began a relationship with Mary Ethel Roberts (died 18 December 1945), whom he married on 24 January 1908. [3] Together, they had three sons and one daughter. [4] A month after his wife's death, Ashton resigned from The Sun in order to devote his time to painting and reading, and to be closer to his family.

Charles Edward Conder was an English-born painter, lithographer and designer. He emigrated to Australia and was a key figure in the Heidelberg School, arguably the beginning of a distinctively Australian tradition in Western art.

Sir William Dobell was an Australian portrait and landscape artist of the 20th century. Dobell won the Archibald Prize, Australia's premier award for portrait artists on three occasions. The Dobell Prize is named in his honour.

John Henry Olsen AO OBE is an Australian artist and winner of the 2005 Archibald Prize. Olsen's primary subject of work is landscape.

George Washington Thomas Lambert was an Australian artist, known principally for portrait painting and as a war artist during the First World War. 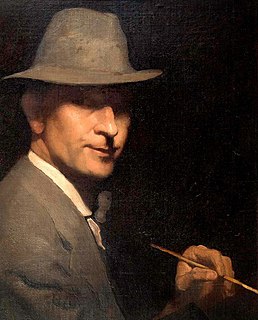 Frederick William Leist was an Australian artist. During the First World War, he was an official war artist with Australian forces in Europe. 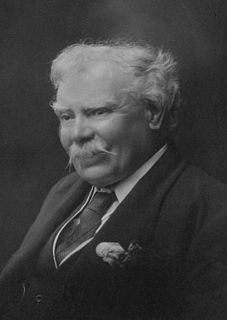 James Ashton was an artist and arts educator in South Australia.

Paul Ashton Delprat is an Australian artist and the Principal of The Julian Ashton Art School, Sydney's oldest continuous fine art school. His art is held in the National Gallery of Australia and in state, municipal and university galleries as well as numerous private collections. 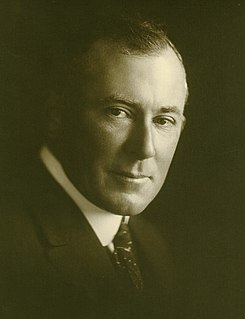 Sir John William Ashton, OBE, ROI was a prolific Australian Impressionist artist and director of the National Art Gallery of New South Wales from 1937 to 1943.

Harold "Hal" Missingham AO was an Australian artist, Director of the Art Gallery of New South Wales from 1945 to 1971, and president of the Australian Watercolour Institute from 1952 to 1955.

Edmund Arthur Harvey, also known as E.A. Harvey or Harvey was a British-born Australian artist. Known for his portraits and landscape art, he also taught painting, most notably at the National Art School in Sydney. In a career spanning 67 years, Harvey's works were shown in numerous exhibitions, and made among others, the collections of the Art Gallery of New South Wales and the Tasmanian Museum and Art Gallery.

Henry Heath "Harry" Glover was an English artist who emigrated to South Australia in 1849. He is noted for producing what may have been the first lithographs in the young colony. His elder son Henry Heath Glover Jr. had a career as artist and lithographer in Melbourne, Sydney, and Christchurch, New Zealand.

The Julian Ashton Art School was established by Julian Ashton in 1890 as the "Academy Julian", has been an influential art school in Australia. For a long time it was known as the Sydney Art School.

Eliza Ann Ashton was an English-born Australian journalist and social reformer. She wrote for The Sydney Morning Herald and The Daily Telegraph in Sydney under the names Faustine and Mrs Julian Ashton. She was a founding member of the Womanhood Suffrage League of New South Wales.

Eliza Pottie was an Australian social reformer, and a leader in women's organization in New South Wales. She was involved in the founding of the Young Women's Christian Association in Sydney, the Ladies' Sanitation Association, and the Women's Christian Temperance Union. She served as president of the Ladies Sanitation Association for nine years. She advocated for prison reform, supported orphanages, visited people in hospitals and institutions, and campaigned for women's suffrage. She was appointed to the Government Asylum Inquiry Board in 1886. A member of the Religious Society of Friends, she helped found the Quaker Relief Committee during the depression of 1893. In 1896, she attended the first National Council of Women New South Wales as a delegate for the WCTU. She died at her home in Manly in 1907.