Julian P. Johnson (1867–1939) was an American surgeon and author of several books on Eastern spirituality. He spent much of 1932 to 1939 in India, was associated with the Radha Soami Satsang Beas movement and Surat Shabd Yoga, and wrote five books (one unpublished) as a result of his experiences.

Johnson grew up in a staunch Christian family in the southern United States, became a Baptist minister at age 17, graduated Bachelor of Divinity in Bolivar, Missouri, and received an appointment as a missionary to India at age 22. Johnson claimed that experiences during his three-year stay in India, however, rendered him surprised by the deep understanding possessed by Indians he had sought to convert, and urged him towards further study.

Over the years, he took to studies of various religious and philosophical teachings, including Christian Science, Freemasonry, New Thought, Rosicrucianism, Spiritualism, Blavatskyan Theosophy, and world religions. His spiritual explorations culminated when he visited an old friend (Julia McQuilkin in Oregon) [1] who was a disciple of Baba Sawan Singh of Beas, India. Convinced that he had found his path, Johnson requested initiation, which was arranged for by Dr. Harold Brock. [note 1] After a year, Johnson left once more for India on 24 March 1932. [2] (At the two-week stopover in Hawaii, he had discussions on religion with the English Jodo Shinshu priest Ernest "Shinkaku" Hunt [1876–1967] of the Hongwanji. [2] )

Dr. Johnson was the first American to live permanently at Dera Baba Jaimal Singh, in Beas, where he became busy with study, writing, some medical work, meditation, and traveling with Sāwan Singh. Johnson edited Sardār Seva Singh's English translation of "Soamiji Maharaj" Seth Shiv Dayal Singh's Sar Bachan. [note 2] Johnson also coined the term "Audible Life Stream". He wrote five books at the Dera, four of which were published: With a Great Master in India (1934, autobiographical), Call of the East (autobiography), The Unquenchable Flame (biography of his wife Elizabeth, written in first person), and his magnum opus The Path of the Masters.

In Kashmir, Johnson met Paul Petzoldt (the mountaineer, Outward Bound instructor, and founder of the National Outdoor Leadership School), and invited him to the Dera where Petzoldt received initiation from Johnson's guru, served as Johnson's assistant in the ashram clinic, even helping in surgical operations. Friction occurred after Petzoldt's wife moved from America to join him and then became ill and disillusioned with life in Beās. A tussle with Petzoldt led to the accidental death of Johnson. [3] Petzoldt's version of this occurrence is told in an article by Molly Absolon, "Paul Tells His Story" in The Leader, Fall 1995, NOLS .

For a comprehensive look at how Johnson died see the book, "The Mystery of Dr. Johnson's Death: A Scandal in the Punjab".

Johnson remains the most well known among many Western adherents of and authors on Sant Mat / Surat Shabd Yoga. Possibly, no other single author in Sant Mat has more influenced North American "Shabdism" (—David C. Lane's term) than Johnson.

The Path of the Masters

Johnson's magnum opus, now published as The Path of the Masters: The Science of Surat Shabd Yoga: The Yoga of the Audible Life Stream [5] (but originally titled The Path of the Masters: The Science of Surat Shabda Yoga: Santon ki Shiksha) is a comprehensive, explicit, systematically organised, meticulous, and polished work on the Path of the Soundstream and Lightstream. Published in France (1939), the USA (1957) and India (slightly revised by the Radha Soami Satsang Beas Publications Committee in 1972 and 1985 to delete provocative language, and extensively revised in 1993, [note 5] ) it remains popular among Western adherents of Sant Mat. However, its author's blunt style and now outmoded opinions – influenced by Northern European racist notions then in vogue but now considered politically incorrect — have turned off some modern readers. The text's sheer eloquence, however, has made the work the object of plagiarism by other writers, especially in the United States, where it used to be almost totally unknown to the general reading public. The work appears to have heavily influenced the American Eckankar (ECK) religion, and its various offshoots and spin-offs, through ECK founder Paul Twitchell's [6] [7] [8] [9] alleged plagiarism – discussed at length and in depth in Prof. David C. Lane's exposé The Making of a Spiritual Movement. [note 6]

Among Western adherents at least, The Path of the Masters has enjoyed long-time popularity among foreign-language works on Sant Mat. [10] A sampling of Johnson's polished prose (1985 pagination) shows the logic that has proven compelling to Western readers, even outside of Sant Mat circles: [note 7]

Published photographs of Julian and Elizabeth Rose Johnson include:

Eckankar is a new religious movement founded by Paul Twitchell in 1965. Its membership today is primarily in the United States. The spiritual home is the Temple of Eck in Chanhassen, Minnesota. Eckankar is not affiliated with any other religious group.

Paul Twitchell was an American author and spiritual teacher who created and directed the development of the new religious movement known as Eckankar. Twitchell described himself as "The Mahanta, the Living ECK Master" from 1965 onward. These are terms without proven historical use prior to 1965 and founder Twitchell’s usage. He also ascribed to himself the name Peddar Zaskq in his writings.

David Christopher Lane is a professor of philosophy and sociology at Mt. San Antonio College, in Walnut, California. He is notable for his book The Making of a Spiritual Movement: The Untold Story of Paul Twitchell and Eckankar which exposed the origins of Eckankar and demonstrated the plagiarism of its founder, Paul Twitchell. He is also notable for introducing to a wider audience the teachings of Baba Faqir Chand, the Indian exponent of Surat Shabd Yoga from Hoshiapur in the book, The Unknowing Sage: The Life and Work of Baba Faqir Chand. Lane founded the journal, Understanding Cults and Spiritual Movements in the 1980s which featured critical studies of John-Roger Hinkins and Movement of Spiritual Inner Awareness, Adi Da, and Sathya Sai Baba.

Kirpal Singh was a spiritual master (satguru) in the tradition of Radha Soami.

Contemporary Sant Mat Movements, mostly among the Radha Soami tradition, are esoteric philosophy movements active in the United States, Europe, Australia, Latin America, and especially India. These movements assert that Sant Mat shares a lineage with Sikhism and contains elements of thought found in Hinduism, such as karma and reincarnation. They further assert that Sant Mat also contains elements found in Sufism and has inspired and influenced a number of religious groups and organizations. They refer to this spiritual path as the "Science of the Soul" or ‘Sant Mat’, meaning ‘teachings of the saints’. More recently it has been described as "The Way of Life" or "Living the Life of Soul." It incorporates a practical yoga system known as Surat Shabd Yoga.

Surat Shabd Simran is a type of spiritual meditation in the Sant Mat tradition. 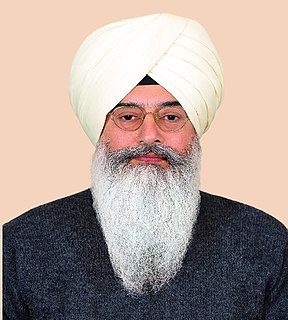 Radha Soami Satsang Beas (RSSB) is a spiritual organization in Radha Soami movement. It is, currently, headed by Gurinder Singh. The main centre of RSSB is located on the banks of the Beas River in the northern Indian state of Punjab.

Sawan Singh (1858-1948), also known as The Great Master or Bade Maharaj ji, was an Indian Saint or Sant. He was the second spiritual head of Radha Soami Satsang Beas (RSSB) from the death of Jaimal Singh in 1903 until his own death on 2 April 1948.

Shabda, is the Sanskrit word for "speech sound". In Sanskrit grammar, the term refers to an utterance in the sense of linguistic performance.

Sir Anand Swarup, Kt. also known as Param Guru Huzur Sahabji Maharaj was the founder of Dayalbagh. He was the fifth revered leader, or Sant Satguru, of the Dayalbagh branch of the Radha Soami faith, who succeeded Sarkar Sahab in 1913. He also laid the foundation of Radhasoami Educational Institute, a co-educational middle school which opened in 1917 and later expanded and developed as Dayalbagh Educational Institute. He wrote many holy books on the Radhasoami faith, explaining the concepts of Surat Shabd Yoga and objectives of Radhasoami in general.

Sant Mat was a spiritual movement on the Indian subcontinent during the 13th–17th centuries CE. The name literally means "teachings of sants", i.e. mystic Hindu saints. Through association and seeking truth by following sants and their teachings, a movement was formed. Theologically, the teachings are distinguished by inward, loving devotion by the individual soul (atma) to the Divine Principal God (Parmatma). Socially, its egalitarianism distinguishes it from the caste system, and from Hindus and Muslims. Sant Mat not to be confused with the 19th-century Radha Soami, also known as contemporary "Sant Mat movement". 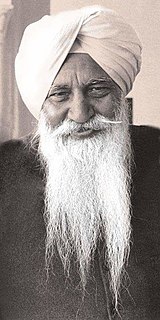 Hazur Maharaj Charan Singh Ji (1916–1990), was the spiritual head of Radha Soami Satsang Beas, Dera Baba Jaimal Singh, after he was named successor by the preceding Beas guru Sardar Bahadur Maharaj Jagat Singh Ji, in 1951. Maharaj Charan Singh served as the guru for the Beas Dera for almost four decades, until his death from heart failure in 1990 at the age of 73. Before his appointment in 1951, he had practiced law in Hisar and Sirsa, India. He was an initiate of Maharaj Sawan Singh's, who was his paternal grandfather and the predecessor of Maharaj Jagat Singh. Maharaj Charan Singh assigned the duties of his successor and Guru to his initiate and nephew Baba Gurinder Singh.

Jaimal Singh (1839–1903) was an Indian spiritual leader. He became an initiate of Shiv Dayal Singh. After his initiation, Jaimal Singh served in the British Indian Army as a sepoy (private) from the age of seventeen and attained the rank of havildar (sergeant). After retirement, he settled in a desolate and isolated spot outside the town of Beas and began to spread the teaching of his guru Shiv Dayal Singh. The place grew into a colony which came to be called the "Dera Baba Jaimal Singh", and which is now the world centre of the Radha Soami Satsang Beas organisation.

Jagat Singh (1884–1951) was an Indian Surat Shabd Yoga practitioner and initiate of the Sant and Radha Soami Satsang Beas Guru Sawan Singh. He worked as a college chemistry professor at an Agricultural College and was honoured for meritorious service by the British as Sardar Bahadur. After retirement he was chosen by his spiritual Master to be his successor, becoming the third Guru of Radha Soami Satsang Beas. Remembered as quiet, inconspicuous, and unassuming, he was once described by the Muslim mystic Sain Lasoori Shah of Lyallpur as a "perfect disciple" who became a "perfect Master".

Sirio Carrapa is an Italian teacher and practitioner of mysticism and Surat Shabd Yoga in the Sant Mat tradition. He was a disciple of Kirpal Singh and Ajaib Singh, and he is acknowledged as a spiritual Master, carrying on the work of his Masters.

This is a list of gurus who gave teachings about the Path of Sound.

Satsang is an audience with a Satguru for religious instruction.