Kunimura was born Yoshihiro Yonemura (米村 喜洋 Yonemura Yoshihiro) in Kumamoto Prefecture, but his family moved to Amagasaki, Hyōgo Prefecture soon after, before moving again to Osaka when he was two years old. He graduated from a theatre program operated by the Osaka Broadcasting Corporation, a theatre company owned and operated by a local NHK affiliate. He has cited actor Yūsaku Matsuda as an influence.

Kunimura began his acting career with a bit part in Shirō Moritani's 1973 disaster film Tidal Wave. He went on to appear in the TV dramas Ayu no Uta and Yôi don, before holding his first starring role in Kazuyuki Izutsu's Gaki Teikoku. [1] Throughout the late 80s and early 90s, he appeared in a number of Hong Kong-produced films, including a prominent cameo role in John Woo's Hard Boiled, as a Triad gunman in the film's opening teahouse shootout. In 1989, he starred in his first American film, Black Rain. The Ridley Scott-helmed Yakuza action film was shot on-location in Kunimura's hometown of Osaka, and starred his mentor Yūsaku Matsuda.

Kunimura is known internationally for his work with Western directors such as Ridley Scott, Quentin Tarantino, and Roland Emmerich. [2] He has collaborated with prominent Japanese filmmakers like Takashi Miike, Lee Sang-il, Hideaki Anno, and Ryuhei Kitamura. In 2016, he starred in Na Hong-jin's Korean horror film The Wailing, which earned him critical and popular acclaim. It earned him the Best Supporting Actor and Popular Star Awards at the 37th Blue Dragon Film Awards, making him the first-ever non-Korean and Japanese actor to be nominated for the award.

Yūsaku Matsuda was a Japanese actor. In Japan, he was best known for roles in action films and a variety of television series in the 1970s as well as a switch to a wider range of roles in the 1980s. His final film appearance was as the villain Sato in Ridley Scott's Black Rain.

Yo Oizumi is a TV personality, actor and seiyu based in Hokkaidō. He was born in Ebetsu, Hokkaido and has been living in Sapporo since 1984. He is a member of the TEAM NACS.

Hidetoshi Nishijima is a Japanese actor.

Asami Mizukawa is a Japanese actress. She grew up in Ibaraki, Osaka.

Yōji Matsuda is a Japanese actor and voice actor from Tokyo, Japan. 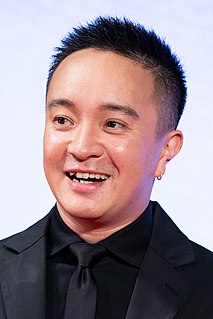 Na Hong-jin is a South Korean film director and screenwriter. For his feature film debut The Chaser (2008), Na won Best Director at the Grand Bell Awards and Korean Film Awards.

Hayato Ichihara is a Japanese actor who is best known for his roles in film and television, including the 2001 film All About Lily Chou-Chou. In 2009 he was voted one of Oricon's "fresh Stars" of the year. In 2009 he was also voted the 4th most attractive male celebrity in a swimsuit. In 2011 in a poll by NTT DoCoMo Ichihara was voted as having the 7th best abs based on 1,720 votes.

Ryohei Otani is a Japanese actor and model. He began his modeling career in Japan, then entered Korean entertainment by being featured in a commercial for Dunkin' Donuts in 2003, followed by Hyundai Motors, Olympus and SK Telecom. His popularity helped him land roles on television, beginning with the 2006 sitcom Soulmate. Otani's acting career continued to be active in South Korea, starring in television dramas such as The Road Home, Dear My Sister, Hero, The Chaser, and Gunman in Joseon that earned him Global Star Award in the 7th Korea Drama Awards as well as the period blockbusters War of the Arrows and The Admiral: Roaring Currents. He has currently been acting in Japan; starring in hit Japanese dramas like The Full-Time Wife Escapist as Ryota Kazami, Love Rerun as Ryosuke Sagisawa in 2018, and will be taking part in many more Japanese works later in 2018 as well.

Hayato Isomura is a Japanese actor who is represented by the talent agency Blue Label.

Kōtarō Yoshida is a Japanese actor and theatre director. He is currently affiliated with Horipro.

Yukiya Kitamura is a Japanese actor represented by Tom company. His father is actor Kazuo Kitamura and his wife is actress Shiho Takano.

Muga Tsukaji is a Japanese comedian and actor. He performs boke in the comedy duo Drunk Dragon. His partner is Taku Suzuki. He is nicknamed Tsukacchan (塚っちゃん).

Taro Suruga is a Japanese musician and actor from Nishinomiya, Hyōgo Prefecture.

Ken Yasuda is a Japanese actor, TV personality and seiyu. He was born in Muroran, Hokkaido. He is a member of the Team Nacs. He graduate from Hokkaido Muroran Sakae High School and, Hokkai Gakuen University. His older brother is Fumio Yasuda.