The Junior Hockey League (MHL) [4] (Russian : Молодежная Хоккейная Лига (МХЛ), romanized: Molodezhnaya Hokkeinaya Liga), sometimes translated as the Minor [5] or Youth Hockey League, [6] is a major junior ice hockey league in Eurasia, founded in 2009. It currently consists of 33 teams from 4 countries. [7] Currently, all teams but one are subsidiaries (feeder teams) for their respective KHL or VHL professional counterparts. A player's age cannot be older than 20. [8] The Kharlamov Cup, named after star ice hockey player Valeri Kharlamov, is awarded annually as the Ice Hockey Federation of Russia's official Junior Championship, [9] following a 16-team playoff at the end of the regular season.

In the first MHL season, 22 teams participated, all from Russia. The MHL opened its doors on September 4, 2009 in Moscow, when the first ever MHL game was played between MHC Dynamo (then the junior team of Dynamo Moscow) and CSKA-Red Army (the junior team of CSKA Moscow) with Dynamo picking up the historic 6–2 victory.

The playoffs started on March 13, 2010. No teams of the Western Conference made it past the round of 16 of the playoffs. Steel Foxes and Kuznetskie Medvedi (the junior team of Metallurg Novokuznetsk) reached the playoff finals for the Kharlamov Cup. The first game of the best-of-five series between these two clubs was played on April 21, 2010. Steel Foxes won the first ever Kharlamov Cup after defeating Kuznetsk Bears 3–2 on April 26, 2010 and winning the series 3–1. Belye Medvedi (the junior team of Traktor Chelyabinsk) and Tolpar (the junior team of Salavat Yulaev Ufa) lost the semi-finals series of the playoffs and played in a two-legged tie for the third place. The first match of the tie was played on April 20, 2010 on Belye Medvedi's home ice and the second leg on April 24 on Tolpar's home ice. Tolpar won both games, first 4–2, second 5–2 and clinched third place of the first season of the MHL.

The regular season started on 4 September 2010 in Magnitogorsk with a match for the Opening Cup between last year's Kharlamov Cup playoff finalists Steel Foxes and Kuznetskie Medvedi. [12] Steel Foxes won the match with 8 goals to 1. The 2011 Challenge Cup took place in Ufa on 12 February 2011. As in 2010, the match pitted the best players of the Western Conference on one side against the best players of the Eastern Conference on the other side. [13] In the West, MHC Khimik won the regular season, while in the East, Tolpar Ufa was the winner.

The playoffs were for the first time separate in each conference, with the two winners meeting in the Kharlamov Cup final. In the final, the Red Army team from Moscow defeated the Steel Foxes from Magnitogorsk with a 4–0 sweep.

For the 2011–12 season, a second division named MHL-B was established, which features mostly junior teams of VHL teams. A relegation and promotion system is in place between the MHL and MHL-B. The number of MHL teams was expanded from 29 to 32. One team, Krylya Sovetov, left the league, while 4 new teams joined: Tatranskí Vlci from Spišská Nová Ves, Slovakia (the junior team of Lev Poprad), Kapitan Stupino from Stupino, Snezhnye Barsy from Astana, Kazakhstan (the junior team of Barys Astana) and Mamonty Yugry from Khanty-Mansiysk (the junior team of Yugra Khanty-Mansiysk). Minskie Zubry were renamed to Dinamo-Shinnik and moved to Babruysk. Sheriff was renamed to MHC MVD and moved from Tver to Balashikha.

The 2012 Challenge Cup took place in Magnitogorsk on 11 February 2012. The first ever Future Cup (Russian : Кубок Будущего, Kubok Budushchego) took place in Chelyabinsk on 13 March 2012 and featured the best under-18 players (not born before 1 January 1994) of both the MHL and the MHL-B division.

For their fourth season, the MHL expanded to Czech Republic and Hungary, with the junior team of HC Energie Karlovy Vary and Patriot Budapest joining. The two Russian teams Kristall Berdsk and HC Oktan Perm were promoted from MHL-B, while Ladya Togliatti (the junior team of Lada Togliatti) and HC Olimpiya Kirovo-Chepetsk were relegated. Slovak team Tatranskí Vlci withdrew from the league. These changes brought the number of teams up to 33, representing 6 countries.

For the fifth season, the league expanded to 40 teams, divided into two conferences with two divisions each. New teams are the junior team of EC Red Bull Salzburg from Austria, Molodaya Gvardia from Ukraine (the junior team of HC Donbass) and Dinamo Saint Petersburg. Ladya Togliatti, Olimpiya Kirovo-Chepetsk, Junior Kurgan (the junior team of Zauralie Kurgan) and HC Chelny were promoted from MHL-B. Oktan Perm was renamed to "Molot". In September, after the season had already started, Patriot from Hungary withdrew from the league, leaving only 39 teams to play the season. [14]

MHC Spartak achieved redemption this season after falling just short the season before by winning the Kharlamov Cup defeating their rivals, the Red Army team from Moscow, 4–3 in the final.

For the sixth season, the league went through a number of changes, with 2 teams joining the league and 2 teams leaving, each for different reasons. Due to the War in Donbass, the league stated that Molodaya Gvardia would miss this season. JHC Bars (then the junior team of Ak Bars Kazan) left the league to join the Supreme Hockey League (VHL). Their place as Ak Bars Kazan's junior team would be taken by Irbis. New teams joining the league were an expansion team from Yuzhno-Sakhalinsk called the Sakhalin Sharks as well as Berkuty Kubani Krasnodar from Krasnodar, who were promoted from MHL-B.

Chaika (the junior team of Torpedo Nizhny Novgorod) won the Kharlamov Cup for the first time after defeating SKA-1946 (one of the junior teams of SKA Saint Petersburg) with a 4–1 final series win.

Chaika returned to the Kharlamov Cup final, but were not able to repeat as champions, with Loko Yaroslavl (the junior team of Lokomotiv Yaroslavl) winning the series, 4–1.

While Reaktor (the junior team of Neftekhimik Nizhnekamsk) dominated both the regular season and the first three rounds of the playoffs, they were not able to continue their success in the Kharlamov Cup final, with the Red Army team taking the series in a 4–0 sweep, winning their second Kharlamov Cup.

Season nine featured some minor changes with only 2 teams joining the league. Those teams were KRS Junior (the junior team of Kunlun Red Star) from Beijing, China (though they play their home games in Riga, Latvia) and returning Kapitan Stupino (which became the junior team of HC Sochi), thus bringing the number of teams in the league up to 33 once again, this time representing only 4 countries. Meanwhile, MHC MVD was renamed to MHK Dynamo.

In December 2010 and January 2011, a team composed of players playing in the MHL named the Red Stars toured North America and played 5 games there with the following results:

As in 2010, the Red Stars (Russian : Красные Звезды, Krasnye Zvezdy), a team made of players who play in the MHL, toured North America. The opponents of the Red Stars were teams from NCAA Division I and the NAHL. [17]

The MHL Red Stars participated in the 2013 IIHF U20 Challenge Cup of Asia. The tournament was held in Khabarovsk. The Red Stars won the game against South Korea but lost against Japan, finishing second in the tournament. [20]

HC Lada Togliatti is a Russian professional ice hockey team based in Tolyatti, Russia. They play in the Supreme Hockey League (VHL). 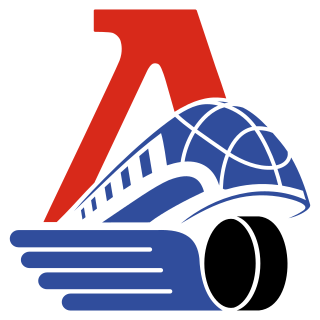 Hockey Club Lokomotiv, also known as Lokomotiv Yaroslavl, is a Russian professional ice hockey team, based in the city of Yaroslavl, playing in the top level Kontinental Hockey League (KHL). The name of the team is derived from its owner, Russian Railways, the national railroad operator.

HC MVD was a professional ice hockey club based in Balashikha, Moscow Oblast, Russia. They were members of the Tarasov Division of the Kontinental Hockey League. They are best known for winning the silver medal in the KHL backstopped by all star goaltender Michael Garnett in 2010. The team merged with Dynamo Moscow to form UHC Dynamo after the 2009–10 season. 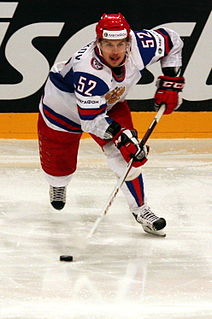 Sergei Sergeyevich Shirokov is a Russian professional ice hockey winger currently with Spartak Moscow of the Kontinental Hockey League (KHL). Prior to signing with Vancouver in 2009, Shirokov played with CSKA Moscow for four seasons in the Russian Superleague and Kontinental Hockey League. He returned to CSKA Moscow in 2011 after two years with the Vancouver Canucks and Manitoba Moose. 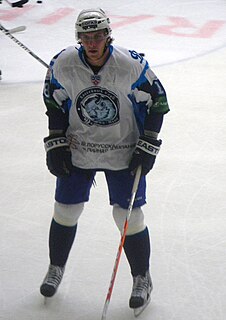 Mikhail Stefanovich is a Belarusian professional ice hockey player currently under contract with Yunost Minsk of the Belarusian Extraliga (BXL). He was drafted by the Toronto Maple Leafs in the fourth round of the 2008 NHL Entry Draft, and was the 2nd overall pick in the 2009 KHL Junior Draft.

Khimik Voskrenensk, also known as Moscow Hockey Club Khimik, is an ice hockey team based in Voskresensk, Moscow Oblast, Russia. The team plays its home games in the 4,500 seat Podmoskovie Ice Palace, which was previously known as the Podmoskovie Sports Palace and the Khimik Sports Palace. It is currently playing in the VHL, the second level of ice hockey in Russia.

The Kharlamov Cup is the trophy presented to the winner of the Russian Junior Hockey League (MHL) playoffs, and is named after ice hockey player Valeri Kharlamov, considered to be one of the greatest ice hockey players of the World. 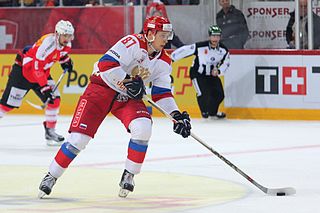 Maxim Valeryevich Shalunov is a Russian professional ice hockey player with the HC CSKA Moscow of the Kontinental Hockey League (KHL). Shalunov was selected in the 4th round by the Chicago Blackhawks in the 2011 NHL Entry Draft. He was born in Chelyabinsk, Russia.

The National Junior Hockey League (NMHL) is the second level of the Junior Hockey League, the KHL's junior ice hockey league. The B division was established in 2011 and the inaugural season was the 2011–12 season. A promotion and relegation system was in place between the MHL and MHL-B, where the bottom 2 teams at the end of the season of MHL were relegated to MHL-B and the 2 best MHL-B teams are promoted to MHL. 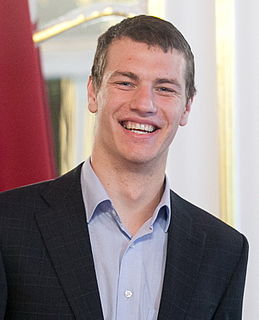 Miks Indrašis is a Latvian professional ice hockey forward who is currently playing with Dinamo Riga of the Kontinental Hockey League (KHL). 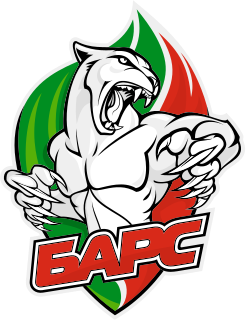 Bars Kazan is a Russian professional ice hockey team from Kazan, who compete in the Supreme Hockey League (VHL). The club is affiliated as a feeder club for the Ak Bars Kazan organization of the Kontinental Hockey League (KHL).

The Hockey Club SKA-1946 Saint Petersburg, is a Russian junior ice hockey club based in Saint Petersburg, Russia. They are members of the Western Conference in the Junior Hockey League (MHL), the junior league of the KHL.

The hockey club Krasnaya Armiya or Red Army, is a Russian junior ice hockey club based in Moscow, Russia. They are members of the Western Conference in the Junior Hockey League (MHL), the junior league of the KHL.

Danil Vitalevich Yurtaikin is a Russian professional ice hockey forward, who is currently playing with CSKA Moscow of the Kontinental Hockey League (KHL). He formerly played with the San Jose Sharks of the National Hockey League (NHL) and Amur Khabarovsk and Lokomotiv Yaroslavl in the KHL. Internationally Yurtaikin has played for the Russian national junior team, and won a bronze medal at the 2017 World Junior Championships.