It is a large shrub or tree growing to a height of 5–20 m (rarely 25 m). The leaves are evergreen, needle-like, in whorls of three, green to glaucous-green, 8–23 mm long and 1–2 mm broad, with a double white stomatal band (split by a green midrib) on the inner surface. It is usually dioecious, with separate male and female plants. The seed cones are berry-like, green ripening in 18 months to orange-red with a variable pink waxy coating; they are spherical, 8–15 mm diameter, and have six fused scales in two whorls of three; the three larger scales each with a single seed. The seeds are dispersed when birds eat the cones, digesting the fleshy scales and passing the hard seeds in their droppings. The male cones are yellow, 2–3 mm long, and fall soon after shedding their pollen in February–March.

It is endangered in its native range due to a combination of historical felling for the valuable wood, and overgrazing by goats. It has been fully protected since 1953 and populations are very slowly recovering. Historical reports suggest trees up to 30 m tall occurred in the past; trees over 10 m are very rare now and confined to inaccessible cliffs.

It is occasionally grown as an ornamental tree in warm temperate climates, including New Zealand, the British Isles and California, but is not common in cultivation. There are also some small experimental plantations on the Canary Islands, where it has shown fast growth in good conditions, reaching about 14–15 m tall in 40 years.

Extraction of the wood with acetone, followed by analysis of the extract, indicate that the essential oil of Juniperus cedrus is particularly rich in thujopsene, which comprises around 2.2% of the weight of the heartwood. [1] 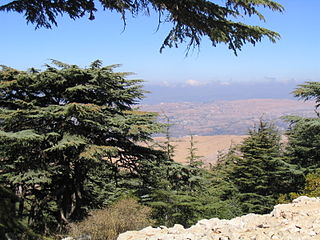 Junipers are coniferous trees and shrubs in the genus Juniperus of the cypress family Cupressaceae. Depending on taxonomic viewpoint, between 50 and 67 species of junipers are widely distributed throughout the Northern Hemisphere, from the Arctic, south to tropical Africa, from Ziarat, Pakistan, east to eastern Tibet in the Old World, and in the mountains of Central America. The highest-known juniper forest occurs at an altitude of 16,000 ft (4,900 m) in southeastern Tibet and the northern Himalayas, creating one of the highest tree-lines on earth.

Juniperus indica, the black juniper, is a juniper native to high-altitude climates in the Himalaya, occurring from the northern Indus Valley in Kashmir east to western Yunnan in China.

Juniperus oxycedrus, vernacularly called Cade, cade juniper, prickly juniper, prickly cedar, or sharp cedar, is a species of juniper, native across the Mediterranean region from Morocco and Portugal, north to southern France, east to westernmost Iran, and south to Lebanon and Israel, growing on a variety of rocky sites from sea level up to 1600 m elevation. The specific epithet oxycedrus means "sharp cedar" and this species may have been the original cedar or cedrus of the ancient Greeks.

Juniperus drupacea, the Syrian juniper, is a species of juniper native to the eastern Mediterranean region from southern Greece, southern Turkey, western Syria, and Lebanon, growing on rocky sites from 800–1700 m altitude.

Juniperus californica, the California juniper, is a species of juniper native to southwestern North America. 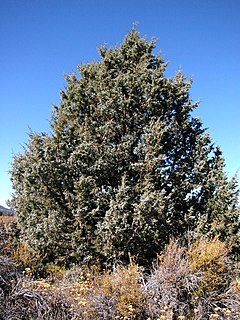 Juniperus occidentalis, known as the western juniper, is a shrub or tree native to the western United States, growing in mountains at altitudes of 800–3,000 metres (2,600–9,800 ft) and rarely down to 100 metres (330 ft). It is listed as Least Concern on the IUCN Red List because it is a widespread species with an increasing population.

Juniperus recurva, commonly named the Himalayan juniper or drooping juniper, is a juniper native to the Himalaya, from northern Pakistan east to western Yunnan in southwestern China. It grows at 3,000-4,000 m altitude. 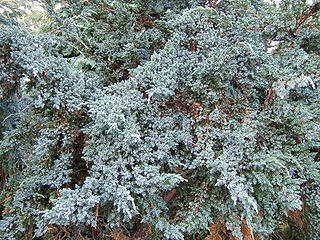 Juniperus squamata is a species of juniper native to the Himalayas and China, from northeastern Afghanistan east to western Yunnan in southwestern China, and with disjunct populations north to western Gansu and east to Fujian. It grows at 1,600-4,900 m altitude. It represents the provincial tree of Khyber Pakhtunkhwa (unofficial).

Juniperus deppeana is a small to medium-sized tree reaching 10–15 m tall. It is native to central and northern Mexico and the southwestern United States. It grows at moderate altitudes of 750–2,700 meters (2,460–8,860 ft) on dry soils.

Juniperus flaccida is a large shrub or small tree reaching 5–10 m tall. It is native to central and northern Mexico and the extreme southwest of Texas, United States. It grows at moderate altitudes of 800-2,600 m, on dry soils. 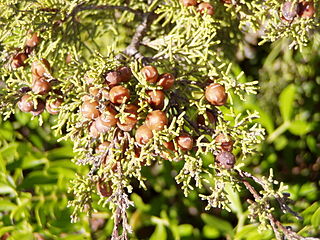 Juniperus phoenicea, the Phoenicean juniper or Arâr, is a juniper found throughout the Mediterranean region, from Morocco and Portugal east to Italy, Turkey and Egypt, south on the mountains of Lebanon, the Palestine region and in western Saudi Arabia near the Red Sea, and also on Madeira and the Canary Islands. It mostly grows at low altitudes close to the coast, but reaches 2,400 metres (7,900 ft) altitude in the south of its range in the Atlas Mountains. It is the vegetable symbol of the island of El Hierro.

Juniperus brevifolia, the Azores juniper, is a species of juniper, endemic to the Azores, where it occurs at altitudes of 240–800 m, rarely up to 1,500 m. It is closely related to Juniperus oxycedrus of the Mediterranean region and Juniperus cedrus of the Canary Islands. It is threatened by habitat loss.

Juniperus monosperma is a species of juniper native to western North America, in the United States in Arizona, New Mexico, southern Colorado, western Oklahoma (Panhandle), and western Texas, and in Mexico in the extreme north of Chihuahua. It grows at 970–2300 m altitude.

Juniperus pinchotii, commonly known as Pinchot juniper or redberry juniper, is a species of juniper native to south-western North America, in Mexico: Nuevo León and Coahuila, and in the United States: south-eastern New Mexico, central Texas, and western Oklahoma. 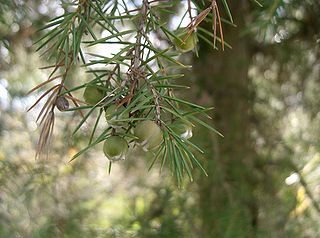 Juniperus rigida, the temple juniper, is a species of juniper, native to northern China, Mongolia, Korea, Japan, and the far southeast of Russia, occurring at altitudes of 10-2,200 m. The species is also naturalized in the United States. It is closely related to Juniperus communis and Juniperus conferta, the latter sometimes treated as a variety or subspecies of J. rigida.

Juniperus standleyi is a species of juniper native to Guatemala and the adjacent extreme southeast of Mexico, where it occurs at elevations of 3,000–4,250 m. Its local common names include huitó, cipres, and huitum.

Juniperus taxifolia is a species of juniper, endemic to the Bonin Islands southeast of Japan.

Juniperus lutchuensis is a species of juniper, native to the Ryukyu Islands, Izu Ōshima and the adjacent coast of Shizuoka Prefecture in Japan.

Juniperus macrocarpa is a species of juniper, native across the northern Mediterranean region from southwestern Spain east to western Turkey and Cyprus, growing on coastal sand dunes from sea level up to 75 m altitude.