Kōichi Yamadera (山寺 宏一, Yamadera Kōichi, born June 17, 1961) is a Japanese actor, voice actor, narrator and singer from Shiogama, Miyagi Prefecture. [1] [2] He graduated from Tohoku Gakuin University's economics school and is currently affiliated with Across Entertainment. Before that, he was affiliated with the Tokyo Actor's Consumer's Cooperative Society. [1]

He is known for his roles in Cowboy Bebop (as Spike Spiegel), the Yakuza videogame series (as Shun Akiyama), Shōwa Genroku Rakugo Shinjū (as Sukeroku), Ghost in the Shell (as Togusa), Neon Genesis Evangelion (as Ryoji Kaji), Ninja Scroll (as Jūbei Kibagami), Dragon Ball Super (as Beerus), Anpanman (as Cheese), Ranma ½ (as Ryōga Hibiki/P-chan and the Jusenkyō Guide), Space Battleship Yamato 2199 (as Aberdt Desler) and the second generation voice of Koichi Zenigata ( Lupin III ). [3] In the live action field, he is most known for voicing Will Smith (Yamadera met Smith several times [4] [5] [6] ), Jim Carrey, Eddie Murphy, Stephen Chow, Robin Williams, Chris Tucker, Jean-Claude Van Damme, Brad Pitt, Charlie Sheen, Michael J. Fox, Michael Keaton, Will Ferrell, Jon Hamm and Mike Myers in the Japanese language releases of their respective films. [7] He is the official dubbed voice of Donald Duck in Japanese. He also voiced Batman in the Japanese version of the film Batman Ninja . He's also been in every Pokémon film to date.

Yamadera was the manager of the Tagajō Senior High School basketball team before he made a name for himself. His voice acting debut was the OVA Megazone 23 as the motorcycle-riding Shinji Nakagawa, [7] while his television debut was the anime Bosco Adventure as the cowardly Otter. Yamadera's break-out role as a voice actor was the anime Ranma ½ , in which he played the dual role of Hibiki Ryōga and the Jusenkyō Guide. In 1991, Yamadera joined forces with Toshihiko Seki and Noriko Hidaka to form the acting unit Banana Fritters (バナナフリッターズ, Banana Furittāsu). In October 1997, Yamadera became a host on the TV Tokyo children's variety show Oha Suta . [7] In March 2016, after almost two decades, he announced his retirement from it. [8]

In 2011, Yamadera took over the role of Koichi Zenigata in Lupin III media from Gorō Naya. [9]

In a 2012 article by Japan Times, it was mentioned that he didn't consider doing voice acting at first, and was interested in going into sales or being an onscreen actor. [10]

Yamadera's also known for his versatile range, as shown in the video game Danganronpa V3: Killing Harmony where he voiced all five Monokuma Kubs, including Monophanie (female). According to the Danganronpa V3 official blog, Yamadera is the first person who came to mind as "the same person voicing multiple characters at the same time". No one has as much "multiple characters" experience as him. He was able to take the individual quirks of each of the Monokuma Kubs and make all of them unique.

Other notable examples of multiple voice acting include the Kingdom Hearts series where he voiced Donald Duck, Genie (from Aladdin ), Sebastian (from The Little Mermaid ), Beast (from Beauty and the Beast ), Mushu (from Mulan ), Jaq (from Cinderella ) and Stitch (from Lilo and Stitch ), and the Japan Animator Expo series of 35 short films where Yamadera and Megumi Hayashibara voiced all characters.

Yamadera is known as "the man with the seven-colored voice". During casting he is also said to be called "When in doubt, Yamadera". [11]

In 2011 and 2017, TV Asahi conducted a poll among Japanese voice actors and actresses on "who they thought was really the most amazing person in their profession". Yamadera ranked first both times. [12] [13] In 2017, Niconico conducted a survey on popular anime voice actors and actresses. Yamadera ranked first overall, third among female voters and first among male voters. [14]

In 2018, he joined the cast of the American animated web series Gen:Lock starring Michael B. Jordan. [15] According to the series showrunner Gray Haddock, "Yamadera-san gives Kazu a fantastic balance of attitude and strength, and as anime fans we're doing our best not to geek out that he's joined the cast".

In 2019, Will Smith came to Japan for a solo interview, and at Smith's request, Yamadera performed a live voiceover, which was highly praised by Smith. This was aired on NTV's "news every." and "Oha!4 NEWS LIVE" on June 5 and June 11, respectively. [6]

Yūji Mitsuya is a Japanese actor, voice actor, director of audiography, voice director and sound supervisor from Toyohashi, Aichi Prefecture who is affiliated with Combination. He graduated from Meiji University.

Hideyuki Tanaka is a Japanese actor, voice actor and narrator from Tokyo who is attached to Aoni Production. He is a graduate of the Toho Gakuen School of Music. He is most known for his roles in One Piece, Dokaben, Kinnikuman, Captain Tsubasa, Detective Conan, Touch, Saint Seiya and Narration, Metal Gear, Slam Dunk and the current voice actor of Zoffy in the Ultra Series.

Kenyu Horiuchi is a Japanese voice actor. In 2002 he founded his own voice acting management office, Kenyu Office. He is best known for dubbing over Brad Pitt, Charlie Sheen, Ben Stiller, Ben Affleck, John Stamos(Especially for Jesse Katsopolis in the ABC sitcom Full House) and many more.

Ikue Ōtani is a Japanese actress, a singer, voice actress and narrator from Tokyo, Japan. She is best known for her anime roles in the Pokémon series, One Piece, Corpse Party, Naruto, Detective Conan, Smile PreCure!, Uchi no Sanshimai, Konjiki no Gash Bell, and Persona 5. She is currently attached to Mausu Promotion. Her pet name is "Iku-chan". She is known for playing both male and female roles, and sometimes plays multiple roles in one production. She is a native of Tokyo, but grew up in Niigata Prefecture. 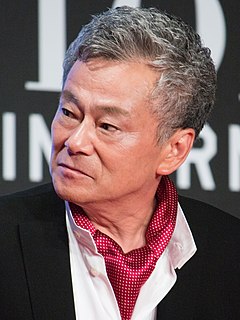 Shūichi Ikeda is a Japanese actor, voice actor and narrator from Tokyo, Japan. Ikeda is married to Sakiko Tamagawa, although he was once married to Keiko Toda. He currently works for Tokyo Actor's Consumer's Cooperative Society. He is best known for his role as Char Aznable in multiple Gundam series, Shuichi Akai from Detective Conan, and Red-Haired Shanks from One Piece. He is also the official Japanese dubbing roles for Jet Li.

Keiko Toda is a Japanese actress, voice actress, singer and narrator from Nagoya, Aichi. Her most famous role is the voice of the children's hero Anpanman on the long running anime Soreike! Anpanman. She was also the voice of Thomas the Tank Engine in the Japanese dub of Thomas & Friends from Season 1 to Season 8. She was once married to Shuichi Ikeda and Junichi Inoue.

Hajimu Kimura, better known by the stage name Kōichi Kitamura, was a Japanese voice actor born in Osaka, Japan. Kitamura was employed by the talent management agency Mausu Promotion. He is known for dubbing roles played by Peter Cushing. He died on October 2, 2007 of pneumonia.

Masashi Ehara, better known as Masashi Ebara, is a Japanese actor, voice actor and narrator from Kanagawa Prefecture. He is affiliated with Aoni Production.

Tesshō Genda is a Japanese actor, voice actor and narrator. He is employed by the talent management firm 81 Produce. When he debuted, he used his real name, Mitsuo Yokoi. as artist name. Because he had experience with ballet, he was known by the nickname "Pirouette Genda." Along with such well-known voice actors such as Akio Ōtsuka, Shigeru Chiba and Kōichi Yamadera, Genda is one of Japan's most prolific voice actors, with 234 roles credited to his name as of September 25, 2007.

Ryūzaburō Ōtomo is a freelance Japanese actor, voice actor and narrator who was formerly affiliated with Aoni Production, 81 Produce and the Tokyo Actor's Consumer's Cooperative Society.

Yumiko Takashima, known by her stage name Gara Takashima is a Japanese actress and voice actress who works for Aoni Production. She is married to voice actor Banjō Ginga.

Katsuhisa Hōki is a Japanese actor and voice actor from Nagasaki Prefecture. He is affiliated with Aoni Production. His real name is Katsuaki Hōki. He is best known for his roles in Transformers: Armada, Higurashi no Naku Koro ni, and One Piece. 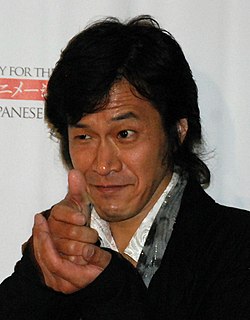 Rikiya Koyama is a Japanese actor, voice actor and narrator currently affiliated with Haiyuza Theatre Company. He has done popular voicing roles in Hajime no Ippo, Utawarerumono, Kamen no Maid Guy and Yakuza, and has become well known for voicing Yamato in Naruto Shippuden and Kogoro Mouri in Case Closed. In addition, he is known for voicing rather tall or massive inhuman villains like Coyote Starrk in Bleach, Fukuro in Fairy Tail and Deep Sea King in One Punch Man. He is the official dub-over artist of George Clooney, Kiefer Sutherland, Dwayne Johnson and Ma Dong-seok. In addition, he dubbed many roles of Denzel Washington, Keanu Reeves and Guy Pearce.

Michio Hazama is a Japanese voice actor and narrator.

Atsushi Ii was a Japanese voice actor from Tokyo. He was formerly attached to Mausu Promotion and Production★A Gumi before settling at Arts Vision.

Nobuyuki Katsube is a Japanese actor and voice actor.

Mika Kanai is a Japanese voice actress and singer. She is attached to Ken Production. She is best known for her roles in Idol Tenshi Yokoso Yoko, Tanoshii Moomin Ikka, Goldfish Warning!, Soreike! Anpanman, Yadamon, After War Gundam X, Hare Tokidoki Buta, Galaxy Angel, Higurashi When They Cry, Tales of Phantasia, Uchi no 3 Shimai, Sailor Moon S, Mysterious Theft Saint Tail. She is currently the voice of Jigglypuff in the Pokémon franchise. She freelanced for the voice of Bonnie, also from the Pokémon series when her regular voice actress Mariya Ise was on maternity leave.