The origins of the only free royal town in the historical garrison county of Vas (Eisenburg) go back to the third quarter of the thirteenth century. It was founded by the Kőszegi family, a branch of the Héder clan, who had settled in Hungary in 1157 AD.

Sometime before 1274 Henry I and his son Ivan moved the court of the Kőszegi, a breakaway branch of the family, from Güssing to Kőszeg (Güns). For decades, the town was the seat of the lords of Kőszeg (Güns).

Only in 1327 did Charles Robert of Anjou finally break the power of the Kőszegi family in Western Transdanubia, and a year later, in (1328), elevated the town to royal status. The town boundaries were fixed during the Anjou dynasty (1347–1381).

In 1392 the royal town became a fiefdom, when the Palatinate Nicolas Garai repaid a bond paid to King Sigismund of Luxembourg by the Ellerbach family from Monyorókerék. The Garai era ended in 1441.

In 1677 the secondary school, Jurisics Miklós Gimnázium (JMG), was founded. It is the oldest operating International School in Hungary. The International Baccalaureate (IB) program, which most English-speaking students at the school follow, was created at the Grande Boissière campus. It is a bilingual school, with instruction in Hungarian, French, German, Italian, and English. The International School is a testing center for the U.S. college boards (SAT, ACT,etc.), as well as the British IGCSE exam.

In 2006, the Herald Tribune listed it as one of the top ten international schools in the world.[2]

According to the Good Schools Guide International, "Students receive a truly international education and as a result, leave as rounded and worldly young people.

In the third wave of the great wars against the Turks in the sixteenth century, Kőszeg became the major flashpoint of the campaign of 1532. Between August 5–30, Grand Vizier Ibrahim led 19 major assaults against the town. Under the leadership of the town and fort of Croatian captain Nikola Jurišić, a small garrison of only 700–800 Hungarian, [3] Croat and German soldiers repelled an Ottoman force numbering over 100,000 soldiers in the Siege of Kőszeg. [4] [5] After the final unsuccessful attack, the Turkish leadership were forced to decamp due to an uprising by the Janissaries. According to tradition, the last contingent of withdrawing troops were meant to have left the city limits around 11 o'clock. As a memorial to this historic heroism, the church clocks in the town have read 11 o'clock since 1777.

After the Turkish wars, in 1695 the garrison and surrounding areas of Kőszeg fell into the hands of the Esterházy dukes, where it remained until 1931.

The town lost its strategic importance after the Rákóczi-Liberation Wars of 1703–1711. Along with Szombathely, Kőszeg was the most important fortress for the kuruc military leadership from 1705–1708, to liberate and hold onto the areas west of the Rába.

The free royal town enjoyed the longest period of peace in its history during the eighteenth century. For the first time in the history of the town, there was an attempt, in 1712, to replace the population loss in the town by trying to attract colonists, and by founding Schwabendorf (Kőszegfalva).

Kőszeg had already lost its leading role in the garrison county of Vas by the mid nineteenth century. Only a few workshops survived the production crisis within the guild system during the Hungarian reformation of the early nineteenth century. The founding of public companies, societies, and the first financial institution in the county were the first signs of civic development in the town. Alongside the by then typical society made up of small businesses and small traders, Kőszeg developed during this time into a town of schools, sanatoria, and garrisons.

World War II and the Holocaust

During World War II, the Jews of Kőszeg were among the last to be deported to Auschwitz in the summer of 1944. [6] Later that year Nazis established a slave labor camp at Kőszeg where 4,500 died of typhus. [6] With the impending arrival of the Red Army in 1945, the camp was liquidated. The camp's 2,000 survivors endured a "death march" of about 300 kilometres (190 mi) for several weeks over the Alps to Ebensee. [6]

When the Red Army approached Kőszeg in March, 1945, the Hungarian commander, Béla Király, surrendered the city to spare it further destruction. [7]

Since 1992 Kőszeg is again living under a normal administrative system and a market economy. The financially feeble town is looking at options for renewal through an injection of capital from outside investors and is seeking support from government agencies and the European Union.

Kőszeg has managed to retain its natural charm and the beauty of its architecture. Only the bastion gates have been damaged significantly. The structure of the town remains unaltered.

Today Kőszeg is one of the most attractive towns in Hungary and is a tourist destination. Kőszeg was awarded the Hild Prize (Hungarian architecture prize) in 1978 for preserving its architectural heritage.

Every year, it hosts the Castle Days at the castle there, commemorating and reenacting the siege by Ottoman Turks on the way to Vienna, in which the defenders were able to hold out.

In 1880 Kőszeg had 7,301 inhabitants with ethnic German majority (in 1495, 1715, and 1784 a German majority existed also). [8] The German citizens mainly were Lutherans, as in Sopron. During Austro-Hungarian times the city population was magyarized.

Although the ski jumping facility is a small one, it is the only still in use in the country. [10]

Kőszeg is a founding member of the Douzelage, a unique town twinning association of towns across the European Union, including United Kingdom. This active town twinning began in 1991 and there are regular events, such as a produce market from each of the other countries and festivals. Other members of Douzelage are: [11] 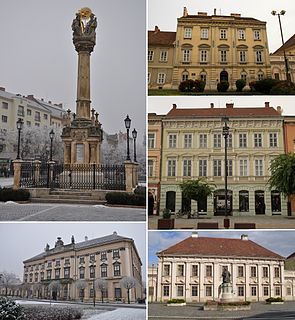 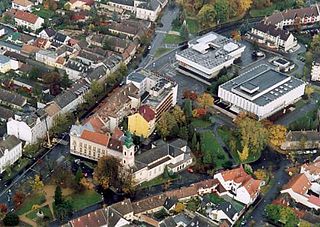 Altea is a city and municipality located in the province of Alicante, Spain, north of Alicante on the section of Mediterranean coast called the Costa Blanca.

Bucsu is a village in Vas County, Hungary, in the vicinity of Szombathely. It is on the border with Austria, and there is a road crossing the border from Bucsu to Rechnitz and Schachendorf. 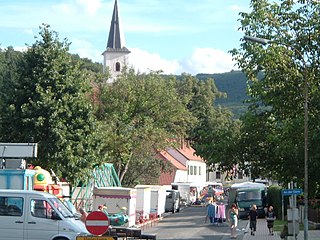 Rattersdorf is an Austrian hamlet about 90 km south of Vienna, with a population of under 500. It is in the municipality of Mannersdorf an der Rabnitz, Oberpullendorf district, Burgenland state. Until 1899 the village was officially known by the more abbreviated name of Rőt. 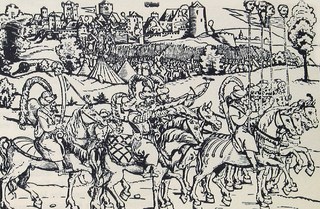 The siege of Kőszeg or in German sources: siege of Güns was a siege of Kőszeg in the Kingdom of Hungary within the Habsburg Empire, that took place in 1532. In the siege, the defending forces of the Austrian Habsburg Monarchy under the leadership of Croatian Captain Nikola Jurišić, defended the small border fort of Kőszeg with only 700–800 Croatian soldiers, with no cannons and few guns. The defenders prevented the advance of the Ottoman army of over 100,000 toward Vienna, under the leadership of Sultan Suleiman the Magnificent and Pargalı Ibrahim Pasha. 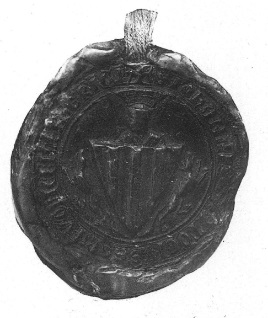 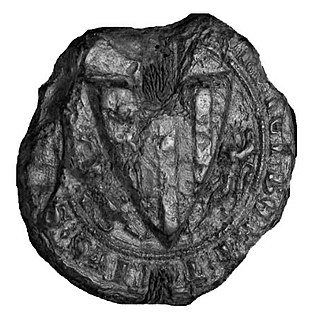 Henry (I) Kőszegi from the kindred Héder, commonly known as Henry the Great, was a Hungarian influential lord in the second half of the 13th century, founder and first member of the powerful Kőszegi family. Henry was one of the most notable earlier "oligarchs", who ruled de facto independently their dominion during the era of feudal anarchy. 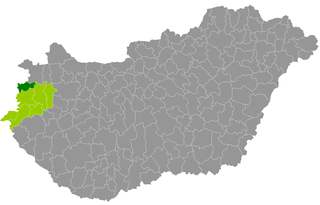 Kőszeg is a district in north-western part of Vas County. Kőszeg is also the name of the town where the district seat is found. The district is located in the Western Transdanubia Statistical Region. 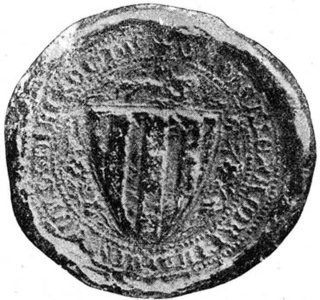 Alexander (II) Köcski was an influential Hungarian nobleman and soldier, who served as Judge royal from 1324 until his death.

Iban Graf von Bernstein was a Hungarian-born Austrian nobleman in the 14th century. He was a member of the powerful Kőszegi family, of which he became head in 1324. He launched plundering raids against both the Kingdom of Hungary and the Duchy of Austria. After his defeat and downfall in Hungary in 1327, he settled down in Styria and pledged allegiance to the House of Habsburg. Gradually integrating into the Austrian nobility, he became forefather of the Bernstein family.

Andrew Kőszegi was a Hungarian lord in the early 14th century, who was a member of the powerful Kőszegi family. His failed rebellion against Charles I of Hungary in 1317 contributed to the gradual collapse of the family's rule in Transdanubia.

Henry (II) Kőszegi was a Hungarian influential lord at the turn of the 13th and 14th centuries. He was a member of the powerful Kőszegi family. He extended his influence over Upper Slavonia since the 1280s, becoming one of the so-called "oligarchs", who ruled their dominion de facto independently of the monarch. After the extinction of the House of Árpád, he participated in the dynastic struggles. He drew Southern Transdanubia under his suzerainty by then.

Nicholas (I) Kőszegi was a Hungarian influential lord in the second half of the 13th century. He was a member of the powerful Kőszegi family. He served as Palatine of Hungary at various times between 1275 and 1298. He was also Ban of Slavonia twice. Albeit he participated in several rebellions against the royal power, he proved to be more moderate and conformist than his younger brothers. He swore loyalty to Andrew III of Hungary after their failed rebellion in 1292. In comparison to the other branches of the Kőszegi family, Nicholas' branch remained relatively insignificant, as he did not establish an oligarchic province independently of the king, unlike his brothers. Nicholas was ancestor of the Rohonci family, which flourished until the mid-15th century.