Kallidaikurichi Aiyah Nilakanta Sastri (12 August 1892 – 15 June 1975) was an Indian historian who wrote on South Indian history. Many of his books form the standard reference works on the subject. Sastri was acclaimed for his scholarship and mastery of sources and was a recipient of the third highest Indian civilian honour of Padma Bhushan.

Nilakanta Sastri was born in a Telugu Niyogi Brahmin family, [1] in Kallidaikurichi near Tirunelveli, on 12 August 1892. [2] He completed his FA in M.D.T Hindu College, Tirunelveli and his college education in Madras Christian College. [3] [4]

Sastri obtained his MA by coming first in the Madras Presidency. He joined the Hindu College as lecturer in 1913 where he taught till 1918. [5] [6] He served as Professor of History, Banaras Hindu University from 1918 to 1920. [5] After that he became the Principal of the (then) newly started Arts College of Annamalai University. [7] In 1929, he was employed as Professor of History at National College, Trichy. The same year, he succeeded Sakkottai Krishnaswamy Aiyangar [8] as the Professor of History and Archaeology at the Madras University, [9] a post he held till 1946. [3] He was the Professor of Indology (Currently renamed as Department of History and Archaeology) at the University of Mysore from 1952 to 1955. [3] [5] [9] He was appointed as the ex-officio Director of Archaeology for the Mysore State in 1954. He was also the President of the All-India Oriental Conference in the early 1950s. [10] From 1957 to 1972, he served with the UNESCO's Institute of Traditional Cultures of South East Asia, as the Director of the institute. [3] [9] In 1957, he was awarded the Padma Bhushan, India's third highest civilian honour. [1] In the summer of 1959, he was a visiting professor at the University of Chicago where he delivered a series of lectures on South Indian History. [5] Nilakanta Sastri died in 1975. [9]

Nilakanta Sastri is regarded as the greatest and most prolific among professional historians of South India. [9] Tamil historian A R Venkatachalapathy regards him as "arguably the most distinguished historian of twentieth-century Tamil Nadu". [11]

In 1915, a Bengali historian Jadunath Sarkar, wrote an essay Confessions of a History Teacher in the Modern Review regretting the lack of acclaimed historical works in vernacular languages and stressed that efforts should be made to write history books and teach history in vernacular languages. [11] Nilakanta Sastri, who was then a young teacher in Thirunelveli, wrote a letter to the newspaper opposing Sarkar's suggestion by saying that "English serves me better as a medium of expression than Tamil – I mean in handling historical subjects. Perhaps the vernacular is not so well off in this part of the country as it should be". [11] Sastri's comments evoked sharp criticism from the nationalist poet Subramanya Bharathi. [11] [12] According to Venkatachalapathy, Sastri's Tamil proficiency was not good and he relied on Tamil scholar S. Vaiyapuri Pillai for understanding Tamil literary works. Thus he was not able to analyse the changing meaning of words over time. Venkatachalapathy says, "In the professional historiography in Tamil Nadu practised in the age of K. A. Nilakanta Sastri there was rarely any interrogation of sources (except in terms of authenticity and chronology)." [13]

Sastri's A History of South India is a recommended textbook for university students of Indian history. In a preface to the 2013 reprint, historian Sanjay Subrahmanyam describes the book thus

... a classic work, which retains its importance and has never quite been replaced. It shows the author's mastery over a huge set of sources, which placed him head and shoulders above other South Indian historians of his time

Historian Noboru Karashima, who edited A Concise History of South India (2014), describes Sastri's A History of South India as an excellent book, and praises Sastri's examination of sources of south Indian history as "thoroughgoing and meticulous". However, Karashima also states that being a Brahmin, Sastri was inclined to emphasize the role of "north Indian and Sanskrit culture in the development of south Indian society", which resulted in occasional bias. Karashima notes that Sastri's book remained the only authoritative scholarly book on the south Indian history for a number of reasons: nobody could match Sastri in bringing out a similar work; attacks from Tamil nationalists deterred historians from writing such a book; and new trends in history writing made composition of works on general history more difficult. [14]

Ganapathy Subbiah (2007) of the Indian History Congress describes Sastri as "the greatest" of all South Indian historians. [15] During Sastri's period, strong language-based movements had emerged in various regions of South India. Subbiah notes that Sastri attempted to portray South India as a distinct geocultural unit, and was keen to dissolve the growth of regionalism in South Indian historiography. [16] Subbiah adds that Sastri's macro-level view of the South Indian history "revolved around Aryan-Dravidian syndrome", and this view changed with his age: in his 20s, Sastri asserted the existence of "an independent Tamil culture which flourished for centuries before it was touched by extraneous influences"; a few years later, he wrote that the culture of the Sangam period was a composite of two distinct "Tamilian and Aryan" cultures; and a decade later, he declared that "Sanskrit is the pivot of our whole culture, and [...] Tamil culture is no exception to this rule". [17] According to Subbiah, Sastri's views should be analyzed in the context of the rise of the anti-Brahmin Dravida Nadu movement in the mid-20th century: his assertions over-emphasizing the importance of Indo-Aryan and Sanskrit influence in south Indian history can be seen as "his angry and desperate response" against the Dravida Nadu secessionists. [18]

In all, Nilakanta Sastri authored 25 historical works mostly on the history of South India. [9] 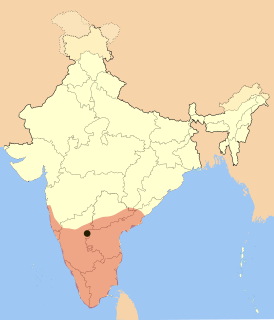 The Vijayanagara Empire was based in the Deccan Plateau region in South India. It was established in 1336 by the brothers Harihara I and Bukka Raya I of Sangama Dynasty, members of a pastoralist cowherd community that claimed Yadava lineage. The empire rose to prominence as a culmination of attempts by the southern powers to ward off Islamic invasions by the end of the 13th century. It lasted until 1646, although its power declined after a major military defeat in the Battle of Talikota in 1565 by the combined armies of the Deccan sultanates. The empire is named after its capital city of Vijayanagara, whose ruins surround present day Hampi, now a World Heritage Site in Karnataka, India. The writings of medieval European travelers such as Domingo Paes, Fernão Nunes, and Niccolò Da Conti, and the literature in local languages provide crucial information about its history. Archaeological excavations at Vijayanagara have revealed the empire's power and wealth. 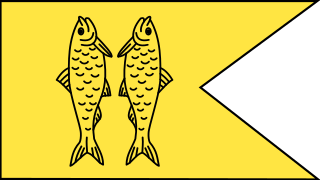 Chakravarti Kulottunga Choladeva was an 11th-century monarch of the Chola Empire of South India. He was one of the sovereigns who bore the title "Kulottunga", literally meaning "the exalter of his race" in Sanskrit. He did not belong to the main line of Cholas but was rather a prince of the Eastern Chalukya dynasty. His mother, Ammangaidevi, was a Chola princess and the daughter of emperor Rajendra Chola I. His father was king Rajaraja Narendra of the Eastern Chalukya dynasty who was the nephew of Rajendra Chola I and maternal grandson of Rajaraja Chola I. According to historian Sailendra Nath Sen, his accession marked the beginning of a new era and ushered in a period of internal peace and benevolent administration.

Kumari Kandam refers to a mythical lost continent with an ancient Tamil civilization, located south of present-day India in the Indian Ocean. Alternative name and spellings include Kumarikkandam and Kumari Nadu. 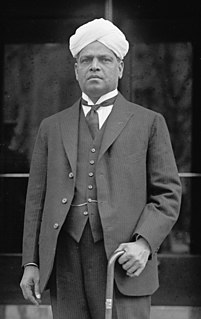 Valangaiman Sankaranarayana Srinivasa SastriCH PC was an Indian politician, administrator, educator, orator and Indian independence activist. He was acclaimed for his oratory and command over the English language. Srinivasa Sastri was born to a poor temple priest in the village of Valangaiman near Kumbakonam, India. He completed his education at Kumbakonam and worked as a school teacher and later, headmaster in Triplicane, Madras. He entered politics in 1905 when he joined the Servants of India Society. Sastri served as a member of the Indian National Congress from 1908 to 1922, but later resigned in protest against the Non-Cooperation movement. Sastri was one of the founding members of the Indian Liberal Party. In his later days, he was strongly opposed to the partition of India. 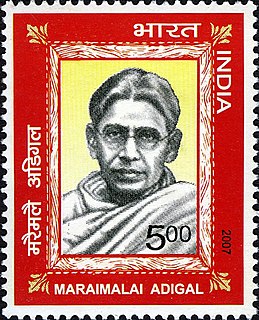 Maraimalai Adigal was a Tamil orator and writer and father of Pure Tamil movement, who fervently followed Saivam. He wrote more than 100 books, including works on original poems tand dramas, but most famous are his books on his research into Tamil literature. Most of his literary works were on Saivism. He founded a Saivite institution called Podhunilaik Kazhagam. He was an exponent of the Pure Tamil movement and hence considered to be the father of Tamil linguistic purism. He advocated the use of Tamil devoid of Sanskrit words and hence changed his birth name Vedhachalam to Maraimalai. 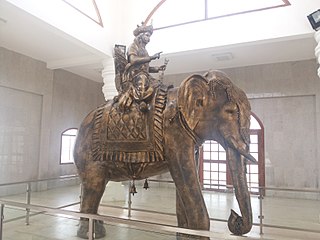 Karikala was a Tamil Chola king who ruled southern India. He is credited with the conquest of the whole of India up to the Himalayas and the construction of the flood banks of the river Kaveri. He is recognised as the greatest of the Early Cholas.

Perunarkilli was one of the Tamil kings of the Early Cholas mentioned in Sangam Literature. There are no definite details about this Chola or his reign. The only information available is from the fragmentary poems of Sangam in the Purananuru poems.

Dharmapala Kamboja was probably the last ruler of Kamboja Pala dynasty of Bengal. He ruled Dandabhukti-mandala in Vardhamana-bhukti in the first quarter of eleventh century and was contemporary of Rajendra Chola of Chola dynasty of Deccan.

Kadungon was a Pandya king of early historic south India. He is chiefly remembered for reviving the Pandya dynastic power in south India. Along with the Pallava king Simhavishnu, he is credited with ending the Kalabhra rule, marking the beginning of a new era in south India.

Maravarman Rajasimha I, also known as Pallavabhanjana, was a Pandya king of early medieval south India. He was the son and successor of Ko Chadaiyan Ranadhira. He remembered for his important successes against the Pallavas and in the Kongu country.

Varagunavarman II, also described as Varaguna II, was a king of the Pandya dynasty in south India whose reign lasted from c. 862 until c. 880 AD. Varaguna II was famously defeated by a contingent of troops led by Pallava king Aparajita around 880 AD.

Diwan Bahadur Sakkottai Krishnaswamy Aiyangar was an Indian historian, academician and Dravidologist. He chaired the Department of Indian History and Archaeology at the University of Madras from 1914 to 1929.

A R Venkatachalapathy is a historian, author and translator from Tamil Nadu, India who writes and publishes in Tamil and English. Currently he is a professor at the Madras Institute of Development Studies (MIDS). He is noted for collecting and publishing the works of Tamil writer Pudhumaipithan. 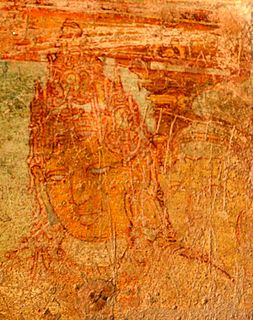 Maravarman Avanisulamani was a Pandya ruler of early historic south India. He was the son and successor of Kadungon, who revived the Pandya dynastic power after the Kalabhra interregnum. Not much information is available about either of these kings.

Jayantavarman, known in Tamil as Seliyan Sendan, was a Pandya ruler of early historic south India. He is best known for extending the Pandya rule to the Chera country (Kerala). He was succeeded by his son Maravarman Arikesari Parankusan.