Kenneth Bruce McFarlane, FBA (18 October 1903 – 16 July 1966) was one of the 20th century's most influential historians of late medieval England. He was born on 18 October 1903 and was the only child of A. McFarlane, OBE. His father was a civil servant in the Admiralty and the young McFarlane's childhood was an unhappy one. This may have led to the deep melancholy that seemed to pervade much of his adult life. [1] His family sent him to public school at Dulwich College as a day-boy. McFarlane did not particularly like the atmosphere of the public school. In 1922 he earned a scholarship to read history at Exeter College, Oxford. His tutor during these years was C. T. Atkinson. Following the completion of his DPhil on the loans of Cardinal Beaufort to the English Crown (September 1927), [2] McFarlane became a fellow of Magdalen College, where he remained for the rest of his life. Many of his colleagues and students found him difficult to approach, but to those who could break through the facade he became a great and true friend. McFarlane also found, through the help of his great friend Helena Wright and her family, a home and a family of sorts. In Wright's house he found that he could be himself and find refuge from the daily grind of the University and a place of joy. McFarlane never married.

His most important contribution to the field was his revision of the understanding of late medieval feudal relationships, known as "bastard feudalism". The old consensus, promoted primarily by Bishop Stubbs, was that payment for service in feudal relationships had promoted greed and civil strife. McFarlane, however, pointed out the adhesive effect of such a system, and other forms of patronage, as a field of common interest for the Crown and the landed aristocracy. According to Christine Carpenter in "Wars of the Roses – Politics and the constitution in England c. 1473–1509" (Cambridge University Press 1997): "It is hard to exaggerate the impact of McFarlane's work, especially at Oxford where he taught. A whole generation of students there was inspired to work on what had been a very neglected century; nearly all the political historians of fourteenth and fifteenth century England today, including the present writer, are, academically speaking, the children or grandchildren, even great grandchildren, of McFarlane". She also described him as being responsible for a "paradigm shift". In more recent debate, it has been pointed out that McFarlane created a "paradoxical metaphor – the image of a polluted, dirty, as it were contaminated phenomenon – of the feudalism" which led to follow-up terms as it was a late-medieval "bastard urbanism" (a term invented by 19th century historians to characterize feudalism as it took form in the Late Middle Ages, foremost in England). [3]

While house-hunting before retirement he was "ambushed by a stroke which killed him instantly". [4]

Although his scholarship and methods have had great influence on later historians, McFarlane did not publish widely in his own lifetime. The main sources for his scholarship are the book Lancastrian Kings and Lollard Knights, his Ford Lectures from 1953 published in 1980 as The Nobility of Later Medieval England, and the essays and shorter articles published by his student G. L. Harriss in 1981 under the title England in the Fifteenth Century. Much of his influence on historiography is the result of his DPhil students, who held posts in many British universities. [5]

Letters to Friends, 1940–1966, edited by G. L. Harriss, contains a selection from the large collection of correspondence deposited with Magdalen College and published privately through the college in 1997. The great bulk of McFarlane's correspondence remains unpublished. [6] 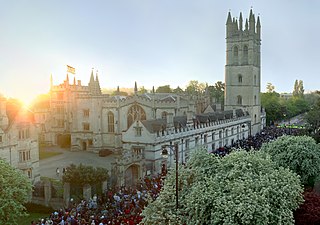 Magdalen College is a constituent college of the University of Oxford. It was founded in 1458 by William of Waynflete. Today, it is the fourth wealthiest college, with a financial endowment of £332.1 million as of 2019 and one of the strongest academically, setting the record for the highest Norrington Score in 2010 and topping the table twice since then. It is home to several of the University's distinguished chairs, including the Agnelli-Serena Professorship, the Sherardian Professorship, and the four Waynflete Professorships.

Humphrey Stafford, 1st Duke of Buckingham, 6th Earl of Stafford, of Stafford Castle in Staffordshire, was an English nobleman and a military commander in the Hundred Years' War and the Wars of the Roses. Through his mother he had royal descent from King Edward III, his great-grandfather, and from his father, he inherited, at an early age, the earldom of Stafford. By his marriage to a daughter of Ralph, Earl of Westmorland, Humphrey was related to the powerful Neville family and to many of the leading aristocratic houses of the time. He joined the English campaign in France with King Henry V in 1420 and following Henry V's death two years later he became a councillor for the new king, the nine-month-old Henry VI. Stafford acted as a peacemaker during the partisan, factional politics of the 1430s, when Humphrey, Duke of Gloucester, vied with Cardinal Beaufort for political supremacy. Stafford also took part in the eventual arrest of Gloucester in 1447.

Rodney Howard Hilton was an English Marxist historian of the late medieval period and the transition from feudalism to capitalism. 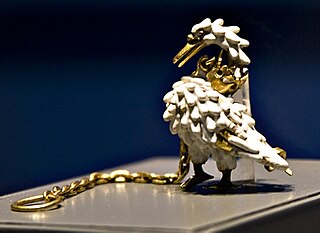 "Bastard feudalism" is a somewhat controversial term invented by 19th century historians to characterize the form feudalism took in the Late Middle Ages, primarily in England in the Late Middle Ages. Its distinctive feature is that middle-ranking figures rendered military, political, legal, or domestic service in return for money, office, or influence. As a result, the gentry began to think of themselves as the men of their lord rather than of the king. Individually, they are known as retainers, and collectively as the "affinity" of the lord, among other terms.

Michael A. Hicks is an English historian, specialising on the history of late medieval England, in particular the Wars of the Roses, the nature of late medieval society, and the kings and nobility of the period.

Charles Derek Ross was an English historian of the Late Middle Ages. He was educated at Wakefield Grammar School and Brasenose College, Oxford, where he completed a doctoral thesis on the baronage in Yorkshire in the early fifteenth century under the supervision of K.B. McFarlane. He published predominantly on the history of the later medieval English nobility, royalty, and the Wars of the Roses. Originally teaching alongside Margaret Sharp, he became reader and then Professor of Medieval History at the University of Bristol. His pupils included Michael Hicks, Anne Crawford and Ralph Griffiths. He remained at Bristol until his death in 1986, when he was killed by an intruder in his own home.

Gerald Leslie Harriss FBA, MA, DPhil.(Oxon), was an English historian of the Late Middle Ages. His work focused on the parliamentary, financial and administrative history of the period. Harriss was a Fellow of Magdalen College, Oxford.

Norman Henry Gibbs was Chichele Professor of the History of War at Oxford University for 24 years from 1953 to 1977, the longest tenure of all who have held the chair since its establishment in 1909.

Henrietta Leyser is an English historian. She is an expert on the history of medieval England, in particular the role of women.

The Stubbs Society is the University of Oxford's oldest and most illustrious forum for scholarship in international history, grand strategy and foreign affairs.

Karl Joseph Leyser was a German-born British historian who was Fellow and Tutor in History, Magdalen College, Oxford, from 1948 to 1984, and Chichele Professor of Medieval History at Oxford University, from 1984 to 1988.

Simon Walker was a historian of late medieval England. Born in Kuala Lumpur, Malaysia, he was educated at Charterhouse School and Magdalen College, Oxford. He was awarded a Prize Fellowship of All Souls College, Oxford where he completed his D.Phil thesis on John of Gaunt. In 1984 he was appointed to a lectureship at the University of Sheffield, and was subsequently promoted to Reader. In 1999 he was appointed a vice-warden of All Souls and gained an Extraordinary Research Fellowship at the College

Charles Arthur John Armstrong, known as John Armstrong, was a leading post-war English historian, known for his studies of the First Battle of St Albans and the medieval Duchy of Burgundy.

In post-classical history, an affinity was a collective name for the group (retinue) of (usually) men whom a lord gathered around himself in his service; it has been described by one modern historian as "the servants, retainers, and other followers of a lord", and as "part of the normal fabric of society". It is considered a fundamental aspect of bastard feudalism, and acted as a means of tying magnates to the lower nobility, just as feudalism had done in a different way. 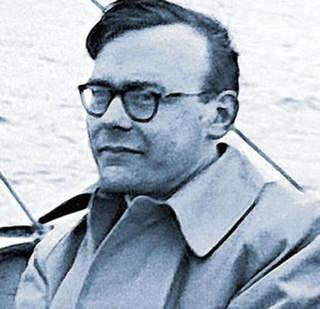 John Roger Loxdale Highfield was an English historian of medieval Europe and fellow of Merton College, University of Oxford. His contribution to the study of medieval Spain was recognised by his appointment to the Order of Isabella the Catholic in 1989.