Born in Sharon, Mississippi, Douglas moved to Vallejo, California in 1945 to work in the naval shipyards, and by 1947 was playing on the San Francisco/Oakland blues scene. Douglas was influenced by Tommy Johnson, [1] who he had worked with in the Jackson, Mississippi area in the early 1940s, [2] and whose "Canned Heat Blues" he adapted on his albums, A Dead Beat Guitar and the Mississippi Blues and Big Road Blues.

The K. C. Douglas Trio's first recording was "Mercury Boogie" (later renamed "Mercury Blues"), in 1948. [3] The other credited musicians were Sidney Maiden (harmonica), Ford Chaney (second guitar), and Otis Cherry (drums). [4] The song has been covered by Steve Miller, David Lindley, Ry Cooder and Dwight Yoakam, and a 1992 version by Alan Jackson was a number two hit on the US country chart. [1] Meat Loaf also covered the song as a bonus hidden track that appears on his 2003 album Couldn't Have Said It Better . [5] The Ford Motor Company purchased rights to the song and used it in a TV commercial. [1]

In the early 1960s Douglas recorded for Chris Strachwitz, mostly released on Strachwitz's Arhoolie Records and the Prestige Bluesville label. In 1961, Douglas played guitar on Sidney Maiden's album, Trouble An' Blues, thus reuniting a partnership that had started in the 1940s. [6]

Douglas played at the San Francisco Blues Festival in 1973 and 1974. He formed a quartet that performed in the East Bay/Modesto/Stockton area. [1]

Douglas died of a heart attack in Berkeley, California in October 1975, and was buried in the Pleasant Green Cemetery in Sharon, Mississippi. [1]

While in his thirties and working at a garage, Douglas taught blues guitar to Steve Wold, now performing as Seasick Steve, the grandson of his employer. [7] [8]

Note: the reverse of "Mercury Boogie" was by Sidney Maiden.

The diddley bow is a single-stringed American instrument which influenced the development of the blues sound. It consists of a single string of baling wire tensioned between two nails on a board over a glass bottle, which is used both as a bridge and as a means to magnify the instrument's sound.

Arhoolie Records is an American small independent record label run by Chris Strachwitz and is based in El Cerrito, California, United States (it is actually located in Richmond Annex but has an El Cerrito postal address. The label was founded by Strachwitz in 1960 as a way for him to record and produce music by previously obscure "down-home blues" artists such as Lightnin' Hopkins, Snooks Eaglin, and Bill Gaither. Arhoolie still publishes blues and folk music, Tejano music including Lydia Mendoza, Los Alegres de Terán, Flaco Jiménez, regional Mexican music, cajun, zydeco, and bluegrass.

Chris Strachwitz is a German-born American record label executive and record producer. He is the founder and president of Arhoolie Records, which he established in 1960 and which became one of the leading labels recording and issuing blues, Cajun, norteño and other forms of roots music from the US and elsewhere in the world.

Steven Gene Wold, commonly known as Seasick Steve, is an American blues musician. He plays mostly personalized guitars and sings, usually about his early life doing casual work. From the late 1960s, he worked as a musician and recording engineer in the US and Europe, as well as pursuing other work, before his commercial breakthrough, initially in the UK, at the end of 2006. Some sources suggest an earlier birth date.

Dog House Music is the second album by Seasick Steve, and his first as a solo artist. It was released on 27 November 2006; however pre-release CDs were available for sale to members of his site's mailing list. 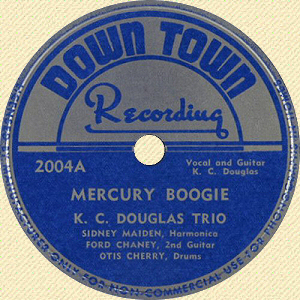 "Mercury Blues" is a song written by K. C. Douglas and Robert Geddins, and first recorded by Douglas in 1948. The song, originally titled "Mercury Boogie," pays homage to the American automobile marque, which ended production in 2010.

I Started Out with Nothin and I Still Got Most of It Left is the third album by Seasick Steve. It was released on 29 September 2008. It entered the UK album chart at number 9 on 6 October 2008. The album is his first on the record label Warner Bros. Records, but the vinyl releases are still on his old label, Bronzerat Records. 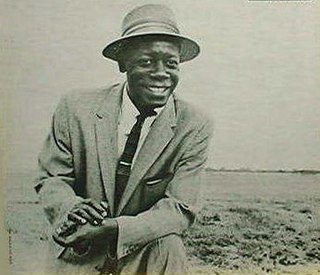 Mercy Dee Walton was an American jump blues pianist, singer and songwriter, whose compositions went from blues to R&B numbers. According to journalist Tony Russell in his book The Blues - From Robert Johnson to Robert Cray, "Walton created a series of memorable blues about the unattractiveness of rural life, sardonically aimed at the black migrant workers in southern California who constituted his typical audience".

Charlie Spand was an American blues and boogie-woogie pianist and singer, noted for his barrelhouse style. He was deemed one of the most influential piano players of the 1920s. Little is known of his life outside of music, and his total recordings amount to only thirty-three tracks.

Wade Walton was an American blues musician and local civil rights leader from Mississippi. He was also a renowned barber, who counted many famous musicians amongst his friends, colleagues, and customers.

Sidney Maiden was an American country blues musician. Maiden principally played harmonica accompaniment, but also sang on some of his own recordings, in addition to writing several compositions. His best known work is "Eclipse of the Sun" (1948).

Andrew Odom was an African-American Chicago blues and electric blues singer and songwriter, best known for the close resemblance of his singing style to that of Bobby Bland and B.B. King.

K. C.'s Blues is an album by blues musician K. C. Douglas recorded in 1961 and released on the Bluesville label.

Big Road Blues is an album by blues musician K. C. Douglas recorded in 1961 and released on the Bluesville label.