Last updated August 03, 2021
Not to be confused with A. P. Udhayabhanu.
Musical artist

Udayabhanu was born to N. S. Varma and Ammu Nethyaramma at Tharur in the present-day Palakkad district. [2] He was the nephew of music scholar K. P. Appukutta Menon [2] and freedom fighter K. P. Kesava Menon. [3] Udayabhanu spent his childhood in Singapore, where his father ran a business. [3] Following his mother's death, he returned to India at the age of seven. [3] Udayabhanu joined the Thyagaraja Sangeetha Vidyalaya in Kalpathy and started learning music under the guidance of Erode Viswanatha Iyer, Palghat Mani Iyer, M. D. Ramanathan, Palghat Srirama Bhagavathar, and Flute Krishna Iyer. [2] Udayabhanu married singer Vijayalekshmi in 1970 and they had a son, Rajeev Udayabhanu. [1] Vijayalekshmi died in 2007. [4]

Udayabhanu died on 5 January 2014 at his home in Thiruvananthapuram. [7] [8] He was suffering from Parkinson's disease. [2] Aparna Balamurali, a popular young actress and singer, is his grandniece, being the daughter of his nephew Balamurali, who is himself a professional musician.

In 1984, Udayabhanu launched the musical troupe Old is Gold which has conducted several stage shows in India and abroad. [1] Udayabhanu represented India at the Asia Pacific Popular Song contest in Singapore in 1985. He was also the chief conductor of the Drums of India music programme which was organised as part of the Republic Day celebrations in 1985. [1] He was the chief conductor and composer of Bharatiyam conducted in Thiruvananthapuram. He conducted choral groups in all Indian languages from Delhi Central Production Unit and Delhi Doordarshan. [5] He composed 32 poems by renowned Kerala poets in connection with the Golden Jubilee celebrations of Independence. [1] He conducted music for more than 100 patriotic songs. Of these, more than 80 were in Malayalam. [6] The rest were in Tamil, Telugu, Kannada, Hindi, Bengali, Gujarati, Punjabi, Assamese, Sindhi, Kashmiri, Marathi, and Oriya. [6]

According to Malayalam film historian Balagopal, Udayabhanu's voice was specially suited for sad songs in melodramatic films of the 1960s and 1970s. [10] 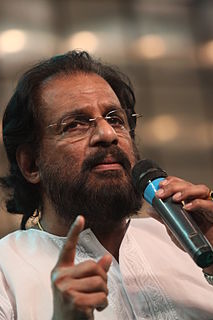 Kattassery Joseph Yesudas is an Indian playback singer and musician who sings Indian classical, devotional and film songs. Yesudas is estimated to have recorded more than 50,000 songs in various Indian languages, including Malayalam, Tamil, Telugu, Hindi, Kannada, Bengali, Odia, Marathi as well as Arabic, English, Latin, and Russian, in a career spanning six decades. He is often referred to as Gaanagandharvan. He is a highly regarded singer in South India along with S. P. Balasubrahmanyam. Yesudas holds the record for singing 11 songs in different languages in a single day. He has also composed a number of Malayalam film songs during the 1970s and 1980s.

Pulloottupadathu Bhaskaran alias as P. Bhaskaran, was a Malayalam poet, lyricist of Malayalam film songs and filmmaker. He penned more than 3000 songs for about 250 films. He also directed 44 Malayalam feature films and 3 documentaries, produced 6 feature films and acted in several movies. For his overall contributions to Malayalam cinema, he was awarded J. C. Daniel Award by the Government of Kerala. 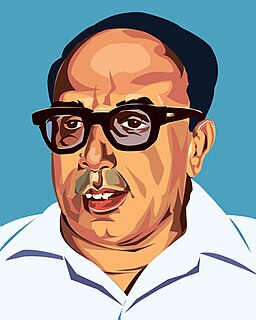 Samasya is a 1976 Indian Malayalam-language film directed by K. Thankappan. The film stars Madhu, Srividya, Kamal Haasan and Sankaradi in the lead roles. The film has musical score by Shyam and K. P. Udayabhanu.

Maheshwari Amma, better known by her stage name K. P. A. C. Lalitha, is an Indian film and stage actress who works primarily in Malayalam theatre and Malayalam cinema. She stated her acting career with K. P. A. C. ; a theatre collective in Kayamkulam, Kerala. In a career spanning five decades, she has starred in over 550 films. She is the current chairperson of Kerala Sangeetha Nataka Akademi. She was married to the late Malayalam filmmaker Bharathan. 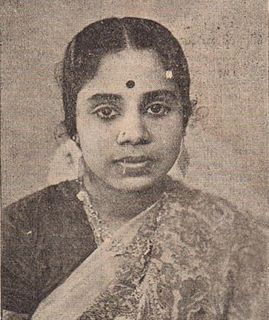 Porayathu Leela credited as P. Leela or Leela was an Indian playback singer, Carnatic vocalist and a music director. She has recorded more than 5,000 songs in various Indian languages including Malayalam, Telugu, Tamil, Kannada, Hindi, Bengali, Sanskrit, Gujarati, Marati etc and as well as foreign language Sinhale. She is also known for her extensive history of collaboration in the songs with Music Composers V Dakshinamoorthy., MS Baburaj, G Devarajan, Ghantasala, MS Viswanathan, KRaghavan, Brother Lakshman, LPR Varma, BA Chithambaranath, AT Ummer, MK Arjun,Johnson, Ouseppachan, Ilaiyaraja, and with the playback singers KJ Yesudas and Ghantalasa over the years. She is also known mostly for her sweet and melodious voice for which she is fondly called as Ganamani.She was awarded Padma Bhushan in 2006.

Vadakkanchery Veeraraghava Bhagavathar Ravi is an Indian classical music violinist. As an enterprising instrumentalist and violinist he has conducted concerts along with his brother V. V. Subrahmaniam and toured several nations including Malaysia, Indonesia, Singapore, Hong Kong, Japan, U.S.A., Canada and England. 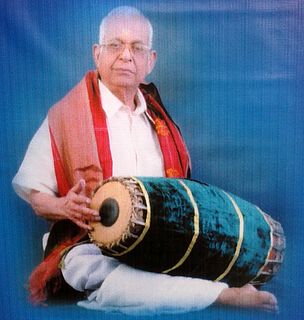 K. P. Nirmal Kumar is a Malayalam-language writer from Kerala, India. He is reckoned among the few front-ranking fiction writers in Malayalam who have contemporary vision.

A. Santha Kumar was an Indian Malayalam language playwright and screenplay writer from Kerala state, South India.He won the Kerala Sahitya Akademi Award for Drama in 2010 for the work Maram Peyyunnu.

K. P. Brahmanandan was a South Indian playback singer from Kerala. He has sung more than 160 songs in Malayalam films.

R. K. Damodaran is a poet and lyricist who has worked predominantly in the Malayalam movie industry. He also worked as a journalist in Mathrubhumi from 1982 to 2013. He has written lyrics for almost 3600 songs in devotional, political, environmental, drama, and light music genres, including two Sanskrit songs. He has worked in more than 100 Malayalam films and written songs like Ravivarma Chithrathin, Thalam Thettiya Tharatt, Manjil Chekkerum, Sukham, Chandrakiranathin Chandanamunnum, Thani Thankakkinapponkal, Pakalppoove.

Chakkalakal Lonappan Jose, better identified as C. L. Jose, is an Indian playwright of Malayalam literature. One of the pioneers of popular Malayalam theatre and a former chairman of the Kerala Sangeetha Nataka Akademi, Jose is the author of 36 plays, 75 one-act plays, one children’s play and Ormakalkku Urakkamilla, his autobiography. He is a recipient of the Kerala Sahitya Akademi Award for Drama, Kerala Sahitya Akademi Award for Overall Contributions and the S. L. Puram Sadanandan Puraskaram of Kerala Sangeetha Nataka Akademi.

T. N. Gopinathan Nair, was an Indian dramatist, novelist, poet, screenwriter and biographer of Malayalam language. One of the prolific among Malayalam playwrights, Nair published 39 plays, besides his four novels, four poetry anthologies and five biographies. He was a member of the council of Kerala Sahitya Akademi and held the char of the Kerala Sangeetha Nataka Akademi. His drama, Pareeksha, received the Vikraman Nair Trophy for the best drama and the Kerala Sahitya Akademi selected his work, Sakshi, for their annual award for drama in 1979.

Yashoda Palayad was an Indian playback singer and actress from Malayalam film industry in the 1960s’ and 70s.

E.V. Valsan is an Indian light musician, music composer, poet and playwright of Malayalam literature. He is mostly known for writing the song Kazhinju Poya Kaalam Kaattinakkare, written in 1969. Valsan is a recipient of Kerala Sangeetha Nataka Akademi gurupuja award in 2020 for his contributions to the light music.